It was Matthew Jocelyn’s libretto, with its disorientingly deconstructive approach to its source text, that gave Brett Dean’s Hamlet its identity. 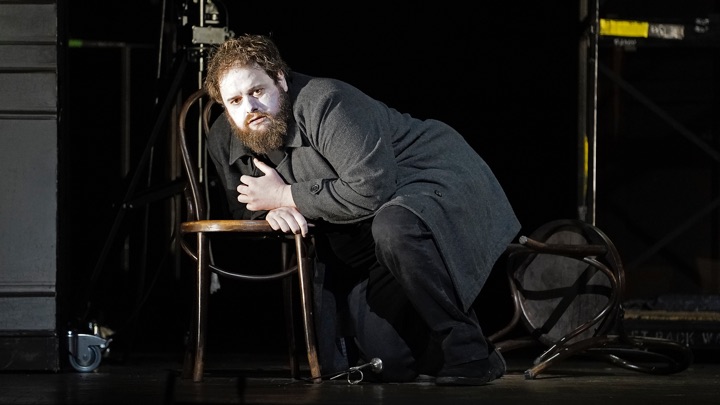 At the risk of sounding too candid, I want to caveat this review with two disclosures: first, that I liked Hamlet, the Brett Dean composed adaptation of Shakespeare’s play now making its US debut at the Met Opera, a lot; second, that my enjoyment was certainly as influenced by my other life, as a graduate student studying Shakespeare, as it was by my position as an opera-lover.

In fact, Hamlet is the first opera I have ever seen where the most compelling component was not the music—which I didn’t dislike, but that, seemingly intentionally, resists becoming likable—nor the staging—which was stylish, but conventional. Instead, it was Matthew Jocelyn’s libretto, with its disorientingly deconstructive approach to its source text, that gave Dean’s Hamlet its identity.

The result is a Hamlet that may seem aesthetically familiar to the seasoned theatergoer, but that in words and music resists the recognizable. It is also, thanks largely to the powerfully sung and sensitively acted central performance of Allan Clayton as the titular prince, a nuanced and compelling production of Hamlet.

Significantly cut down from Shakespeare’s play text, although still running nearly three hours, Jocelyn’s libretto takes the familiar language of Hamlet and relentlessly defamiliarizes it. This approach is present from the opera’s first moments: Hamlet enters, muttering “or not to be,” a phrase he repeats often, while almost never acknowledging another phrase whose addition would create the most famous statement in theatrical history. Jocelyn takes to Shakespeare’s language like a razorblade to film stock. He trims, decontextualizes, rearranges, superimposes: anything that will alienate the text from itself and its fame. 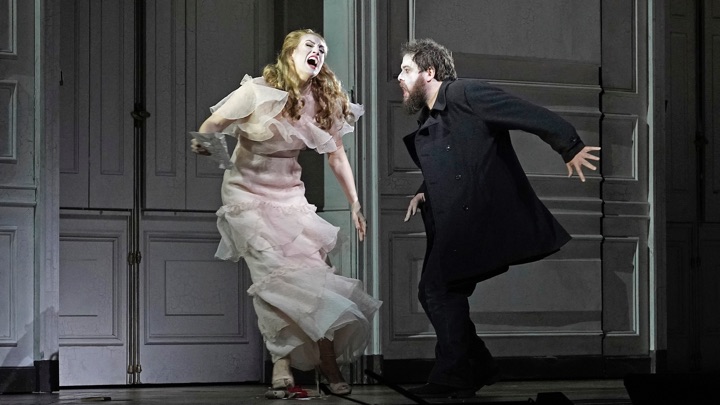 At times, it is as though a whole act of the original play has been sliced into thin sheets and stacked on top of itself. Gertrude, played by the mellifluous-voiced but at times nearly inaudible Sarah Connolly, will begin one half of a scene while Claudius, played with real menace by Rod Gilfry, launches simultaneously into the other half. In this way, the plot’s set-up—the dead king, the re-married queen, the surly prince, the family drama of Polonius and his children, the vengeful ghost—unfolds as a series of fast-paced fragments that sometimes overlap and sometimes interrupt.

This montage effect is aided by Dean’s music, which is particularly effective in moments where multiple overlapping vocal lines, occasionally augmented by a hazy off-stage chorus, create dense and eerie textures of voice.

Frustratingly, some of his most compellingly paired vocal lines go to Aryeh Nussbaum Cohen and Christopher Lowry as, respectively, Rosencrantz and Guildenstern. Cohen and Lowry are both countertenors, and their intertwined voices are ringingly intricate.

But for the king’s foppish and fumbling stooges such rich harmonies are wasted on yet another iteration of the contemporary opera trend of writing foolish or malicious comic characters as countertenors—characters who are queer-coded by both their vocal ranges and the stereotypes they portray. It’s a disappointing choice for a work that should be smarter than cheap, clichéd homophobia.

Tired tropes aside, Dean’s score does not offer much in the way of ease. It is difficult to stay fully invested throughout three hours of music that is best described as “challenging,” even when conducted with crackling intensity by Nicholas Carter. 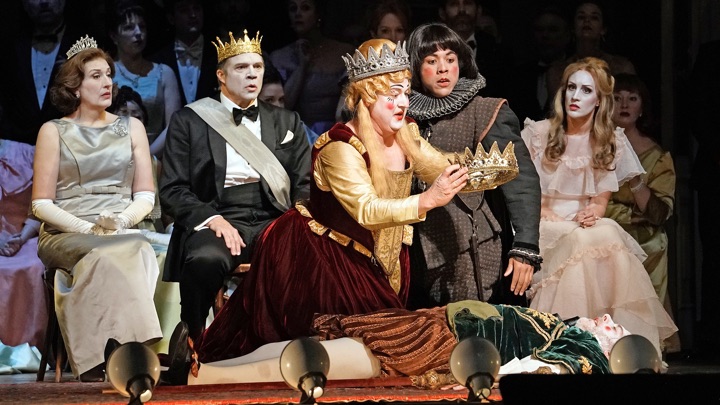 There is a seeming arbitrariness to much of the music of Hamlet: the churning strings; the electronic thrums; the shape of Brenda Rae as Ophelia’s vocal line that gives no sign of the piercing high notes she suddenly blazes forth; the clicking wood-blocks of percussionists seated in balcony boxes that follow impenetrable logics of both timing and location.

One effect of this arbitrariness is, yes, that the concentration required to follow the music-drama closely is exhausting, particularly towards the end of the opera’s 105 minute first act. But ease of listening is not opera’s only virtue.

Another effect is that the same disorientation produced by Jocelyn’s Hamlet cut-ups is generated by Dean’s score. Jocelyn and Dean’s Hamlet is resolutely unpredictable. Neither familiarity with Hamlet nor familiarity with opera will allow the listener to predict what text will generate the next line, or where—on the scale or in the house—will produce the next note.

Presumably, it is no easy task to manage—let alone command or shape—these unpredictable vocal lines. While all of the cast handled the disjointed shapes of their melodies with impressive precision, the standouts among them wedded that precision to strongly acted performances.

Clayton’s Hamlet, for example, is a vivid, lived-in portrayal that could easily hold its own against any of the recent high-profile, nonmusical stage Hamlets. Vocally, his moments of reflection were as sweetly lyrical as his antic mania was raw-edged and nasty, and his easy command of the stage and of the score made Dean’s complicated compositions sound as naturalistic as speech. 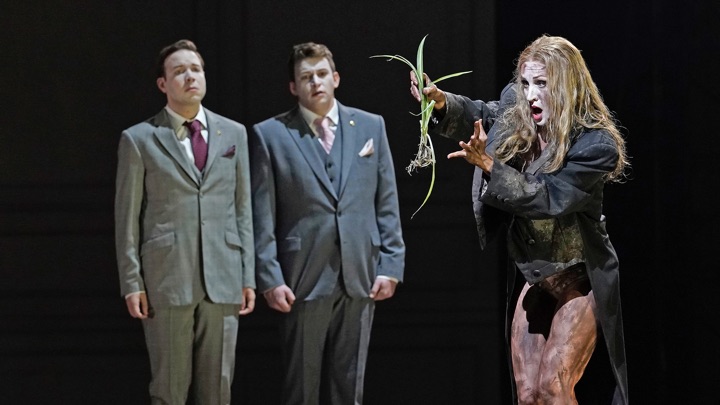 William Burden, as the garrulous courtier Polonius, likewise stood out for the clarity with which he handled complexities of text and music, as did Gilfry as an unusually active and charismatic king Claudius.

The production, by Neil Armfield, is a little generic, both by contemporary-set opera standards and contemporary-set Shakespeare standards. Costumes, by Alice Babidge: the women wear sheath dresses in muted silks. The men wear black suits and overcoats. Ophelia wears her underwear.

Set, by Ralph Myers: panels of white-washed doors and windows are wheeled into various configurations. At one point, they are turned around to reveal the plywood construction of their reverse—a weakly meta-theatrical “backstage” aesthetic whose invocation has become ubiquitous in modern productions of Shakespeare.

To its credit, the staging, while not exactly electrifying, is never cluttered nor confusing. Its visual high-points are two: a ceiling piece that descends with Hamlet and Horatio, the immensely likable Jacques Imbrailo, already standing upon it, and out of which immediately pops the head of the gravedigger (John Relyea); and the lighting shift that occurs when the beautifully natural-looking light slanting through the windows (by designer Jon Clark) is cut off at the opera’s end by closed shutters, transforming the airy hall into the claustrophobic, harshly lit room in which all but one of the principles will die. Perhaps to signal the inevitability of that end, the singers wear death-masks of white face paint.

It is in this tragic inevitability that Hamlet’s approach to its source text finds its conceptual peak. The performance studies scholar Rebecca Schneider once described live theater as the “troubling trace of a precedent text.”Troubling, that is, because the world of the play would have you believe you are watching events that occur, live and sequential, before your eyes—moments ago Tosca watched the execution of Cavaradossi, now she is jumping from the parapet.

But according to Schneider and other theorists of performance, this dramatic unfurling of events is illusory; the finale of Tosca does not come into being before our eyes, it merely echoes the words and score that preceded it in print.

No matter how immersive the theatrical experience, it can only distract from, not banish, the fact that even at its premier it is a repeat performance.

This Hamlet seeks neither to banish nor even to distract from this fact. Rather, the world of Jocelyn’s libretto is explicitly a world of adaptation, in which the source text of Hamlet is seemingly a known quantity. When, for example, Hamlet asks the players for a speech, they give him “to be or not to be”—and the famous version, at that, not the earliest published and least performed version (the so-called “bad quarto”) that Hamlet himself delivered minutes earlier.

Throughout, the characters seem not only to be echoing the precedent text of Hamlet but also consciously quoting it as text, as when the gravedigger laments, “Oh, what a dunghill idiot slave am I!” and is promptly corrected by Hamlet and Horatio: “rogue, peasant.”

In Jocelyn’s libretto, everyone gets to claim a little piece of Hamlet, the play, even the lines that rightfully belong to Hamlet, the prince. Everyone, that is, except Ophelia—whose mad scene instead adds text from her earlier scenes with Hamlet. Rather than letting Ophelia in on the free exchange of text afforded to the other characters, the production confines her to her own lines.

Ophelia’s lack of dramatic depth and self-determination is also an issue in the original play, but here, her madness, usually a poignant foil for Hamlet’s, becomes explicitly the very love sickness dismissed as the cause of Hamlet’s lunacy. Rae was ill-served by this decision, and her flat performance of inexpressive anger—responding to Laertes’ condescension and her own eventual lunacy with the same note of pinched fury—didn’t help the role’s lack of nuance. Rae’s voice, too, had a constricted kind of ferocity, a metallic thinness that allowed for few subtleties of color or emotion.

The readiness is all, the rest is silence—casting about for his appointed line, Hamlet instead finds the dying words he has yet to deliver. This moment of premonition is, like his white face-paint, not only a reminder that Hamlet will die, but a reminder that, in a sense, he already has—centuries ago, when the play was written. To the credit of composer, librettist, director, and actor, when he dies again, on the Met Opera stage, it is freshly heartbreaking.