“We came through the Depression by the skin of our teeth! One more tight squeeze like that and where will we be?” 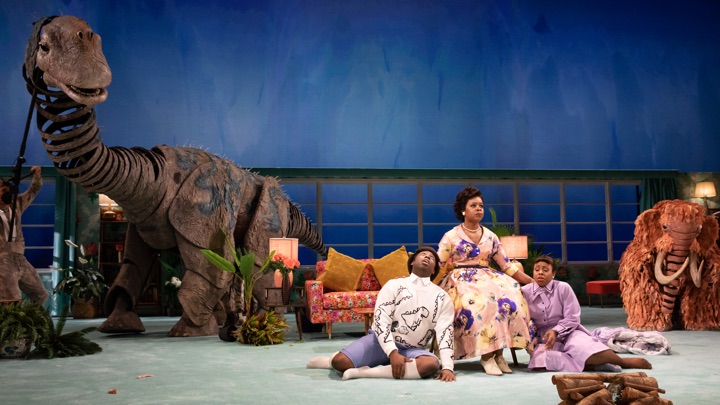 Thus spake Sabina, the Antrobus family’s saucy, mordantly wise maid. But even as she confides in us, there’s worse just around the corner. It’s August, yet a wall of ice looms above, ready to engulf the family’s gracious Excelsior, New Jersey home.

Trouble is brewing for Henry, the Antrobus’s young son, whose aim with a slingshot is frighteningly precise, and whose forehead bears a mysterious mark that can’t be removed (Mrs. Antrobus has tried). Oh, and a mass group of refugees are seeking shelter. Not to mention a dinosaur and a mammoth!

When The Skin of Our Teeth, Thornton Wilder’s magnificent oddity of play premiered on Broadway in November 1942, the U.S. was less than a year into World War II. Coming on the heels of recovery from the Depression (as Sabina says) and the Dust Bowl, there was some justification for cautious optimism—but surely, it was still for too soon for complacency.

To all this, Wilder brings his familiar notes of warmth, humanity, and sentiment (not sentimentality). But there’s something new and surprising in SOOT, which is, by turns, also a biting satire and even an early exploration of theatrical absurdism. The play reveals itself slyly, in layers.

At first glance, we might be looking at a feathery drawing room comedy typical of the period. But wait—suddenly, it’s a play within a play. And both worlds repeatedly go off the rails, with Sabina—in multiple guises—regularly glancing at the audience with “See? I told you so” reminders. And that’s not even considering the myriad side trips into history, philosophy, and religion. 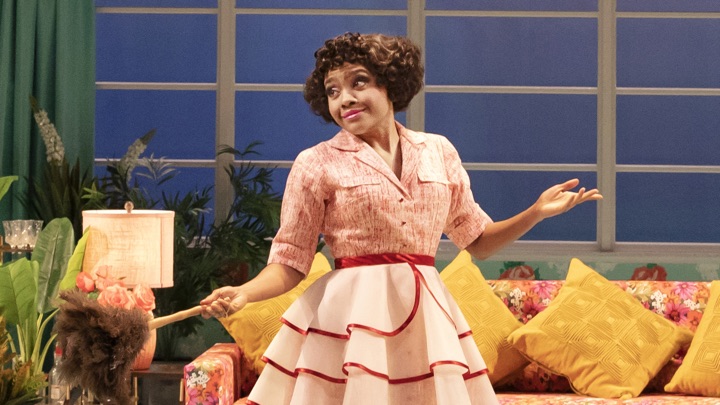 SOOT has never had the popular appeal of Wilder’s more celebrated Our Town, and probably never will, for reasons that should already be clear. (It’s also very long and very large.) But its loyal fans—among whom I count myself—adore it.  More to the point, our current moment makes it stunningly timely. Plagues? Check. Climate problems? Check. War, civil unrest, cultural instability? Check, check, check.

So it was smart, even inevitable, for Lincoln Center Theater to revive it (directed here by Lileana Blain-Cruz), and logical to reinvent a number of elements. Wilder’s script is sufficiently loose that it welcomes new interpretive ideas, which here include casting the Antrobus family as well as Sabina as persons of color. New material was provided by playwright Branden Jacobs-Jenkins, whose own An Octoroon is a masterful spin on a landmark 19th melodrama about race.

The changes are evident from the start. The play’s implied timeline, contemporary with its writing, is updated to a glossy technicolor 1950s suburbia, and I daresay this take on Wilder’s fictional Excelsior is grander and more affluent than was his intent. Actress Gabby Beans plays Sabina in a go-for-broke performance that initially seems meant to channel Eartha Kitt but will later evolve in different directions. Beans’ work is skillful, even virtuosic—but it pulls focus in the wrong sense.

Things feel more grounded with the arrival of the Antrobus family: James Vincent Meredith and Roslyn Ruff as Mr. and Mrs., and Julian Robertson and Paige Gilbert as children Henry and Gladys. Ruff in particular is marvelous—elegant and gracious, but clearly not to be trifled with; and Gilbert finds more dimensionality in Gladys than I’ve previously seen.

More important, the casting of the Antrobuses as a Black family fascinatingly recalibrates the play and makes us hear the lines in a different way. (A critic colleague of mine initially assumed—as I think many would—that Sabina’s comment about George that “every muscle goes tight every time he passes a policeman” must have been a new script addition; in fact, it’s Wilder’s original). 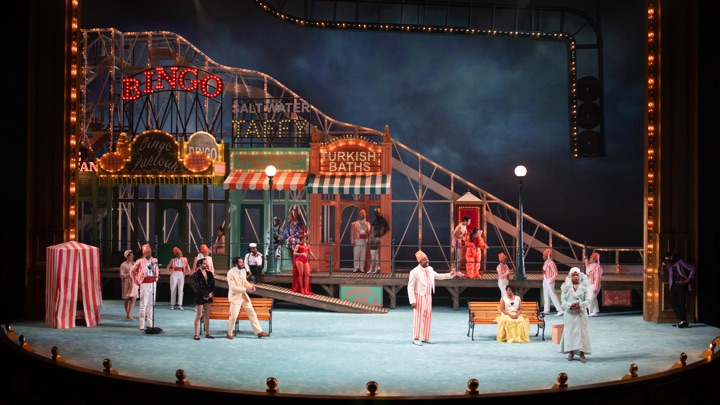 Too bad that through so much of the first act, the Antrobuses are dwarfed, literally and figuratively, but enormous puppets as dinosaur and mammoth. They are delightful on their own but distracting in context. For the record, the gifted team who provide elaborate design includes Adam Rigg (sets), Montana Levi Blanco (costumes), Yi Zhao (lighting), Palmer Heffernan (sound), Hannah Wasileski (projections). The puppeteers are Jeremy Gallardo, Beau Thom, Alphonso Walker, Jr. and Sarin Monae West.

A similar problem occurs in the second act, where a spectacular Atlantic City boardwalk set, complete with working slide, is so eye-popping that we barely notice the Fortune Teller (Priscilla Lopez, who looks sensational and has the right ideas, but largely doesn’t project as tellingly as we’d want.)

Both the Boardwalk act and the final one are, as the first act, reset in different time periods (I’ll leave it as the surprise I think it’s meant to be). Act III is where Jacobs-Jenkins’ revisions are most evident, simultaneously crowning the show and undermining it. Taken on its own, it works best—including a magnificent final stage image that I’ll remember for a long time. But it also moves the play too far into issues of race, undermining its universality.

For me, that’s the ultimate takeaway here. For all of the ingenuity and accomplishment of Blain-Cruz and company, this SOOT doesn’t add up. The jokes are pitched too high. The time shifts don’t resonate. General busy-ness overwhelms the nuances. In short, something major gets lost in this fusillade of cleverness.

Indeed, what’s missing is the key message in Skin of Our Teeth, astounding in its timeless breadth: that simply to go on is not just the duty of humanity—it’s brave and noble. Survival is heroic. Not that we have a choice, really, but we should bear our burden with pride and hope.

That’s all from me, but I’ll leave the final word to Sabina, as Wilder does:

“We have to go on for ages yet… the end of this play isn’t written. You go home.”