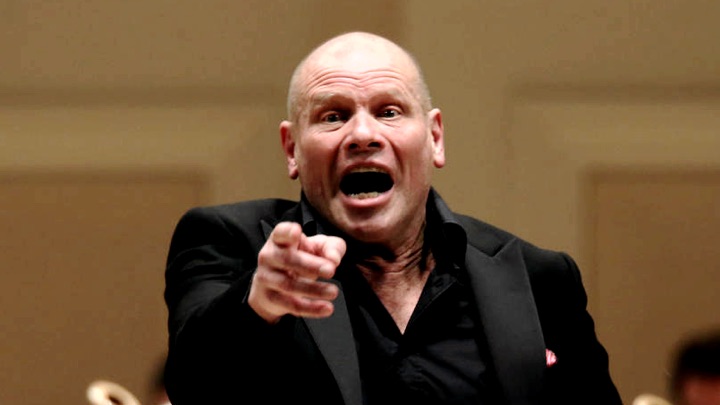 Alban Berg’s Wozzeck (1925) is such a theatrical work in such a forbidding atonal idiom that performing it in concert might seem a foolhardy move—stripped down to just the music in a formal concert setting would the sorrowful humanity and brutalizing tragedy fail to communicate to the audience?

Berg paints each scene in novel and dramatic musical touches—including specific themes and musical onomatopoeia that the drama emerges eloquently even without sets and costumes with the singers in evening clothes behind music stands.

I have seen Wozzeck in concert three times previously [Cleveland Orchestra (1995) with Von Dohnányi; Vienna Philharmonic 2014 with Franz Welser-Möst; and the London Philharmonia (2015) under Esa-Pekka Salonen] and each time Berg’s searing score has told the story stripped to the essentials. Tuesday night’s performance by the Boston Symphony Orchestra under Andris Nelsons at Carnegie Hall was perhaps the most moving yet.

The conductor sets the tone for any Wozzeck performance as much if not more than the singers.  Andris Nelsons chose to emphasize the tortured suffering humanity of the work rather than the harsh cruelty or stark tragedy.  His reading was more lyrical in an almost Mahler symphonic mode—warmer tonalities, connecting musical phrases so that they flowed and rose and fell with the action.

Believe me,that shattering atonal chord that emerges like a dam overflowing after the murder of Marie and is broken off by the tinkly piano in the following tavern scene was just as jarring as ever.  Nelsons did not smooth over any rough or hard edges in Berg’s score.  But he made sure he found the human heart beating beneath the musical abstractions.

Nelsons was helped by an exceptionally warm-toned and full-voiced ensemble of vocal soloists led by the brilliant Wozzeck of Danish baritone Bo Skovhus.  None of the singers were barking or shouting with tonally grayed out or wobbly voices.

Skovhus no longer looks like the blond Nordic hunk of his youthful Billy Budd and Don Giovanni days (back when he was Boje)—his head is shaved and as Wozzeck his tall body looks hunched and somehow broken as if dozens of body blows have shattered his spine.  The eyes are dead hollow and the face is stoic and often immobile.  The increasing paranoia and madness seem to emerge from behind the eyes but his visage is opaque.

He has made a specialty of the role of Wozzeck in Europe (his American career has been limited and recently almost nonexistent).   As a veteran performer of the role onstage, he was totally off book and keen to every musical and dramatic detail.  Even in concert format, Skovhus was fully in character every moment onstage with a body as expressive as his voice.  That voice remains a handsome instrument full of overtones but much darker in color. 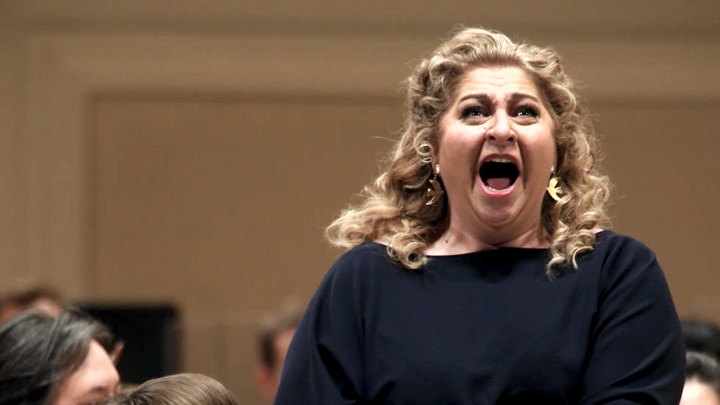 In contrast, dramatic soprano Christine Goerke was singing her first performances of Marie in this concert series.  In October 2015, Goerke was overwhelming as the title antiheroine in Strauss’ Elektra with Nelsons and the Boston Symphony at Carnegie Hall, so her return was highly anticipated.  Though she was dependent on a score, Goerke already showed a personalized dramatic interpretation of the character and her darkly powerful soprano was full of varied colors and fully responsive to the varied demands of the score.

Goerke’s Marie seemed a normally warm-hearted and fun-loving woman whose character had been worn down and hardened becoming bitter and defensive from grinding poverty, life’s disappointments and casual use and abuse at the hands of men.  She longs for a bit of brightness and fun in her dreary life—whether it be a military march in the street or a pair of fake gold earrings from the Drum Major.

This Marie could lash out in defiance against Wozzeck or the Drum Major with real force (and searing top notes) while also whispering hollow tones in her bible reading or death scenes.  The mezzo-like color of Goerke’s middle and lower voice gave earthiness and foreboding to scenes of despair or fear.

The size of her instrument tempted Nelsons to misjudge orchestral volume in her scenes—a few phrases in her lower-middle register got swamped by the overloud orchestra.  One wonders what else Goerke will discover in the role if (hopefully when) she performs it in a fully-staged performance.

The rest of the cast was vivid in characterization and juicy in voice.  One bit of miscasting was English lyric tenor Toby Spence as the Captain—his plangent tones lacked the maniacal and neurotic edge for the character, he had little sense of how to handle Sprechstimme and his acting missed the note of apoplectic hysteria and fear.  I missed Graham Clark and Gerhard Siegel’s fantastically grotesque interpretations.  Spence is still more an Andres than a Captain.

As Andres, Swiss tenor Mauro Peter had an unusually dark and full-toned timbre for the character—perhaps they might have switched roles?  Heldentenor Christopher Ventris looked and sounded rather handsome and imposing as the boorish sadistic Drum Major—his tenor rings out brightly with no strain.

Veteran bass Franz Hawlata also showed experience and command as the Doctor fully able to project character with a rich and still steady voice free of Bayreuth bark or wobble.  Renée Tatum brought rich tone and malicious insouciance to the role of Marie’s neighbor Margret.  None of these voices could be described as German character voices yet all were musically characterful and dramatically effective.

The Boston Symphony emerged as the real star turn of the evening showing large scale sweep, dramatic force and delicate precision in turn in symbiotic partnership with Maestro Nelsons—they startled with the ugliness in the score and then broke your heart with its mournful, shattering beauty.