There are fascists at the bottom of our garden 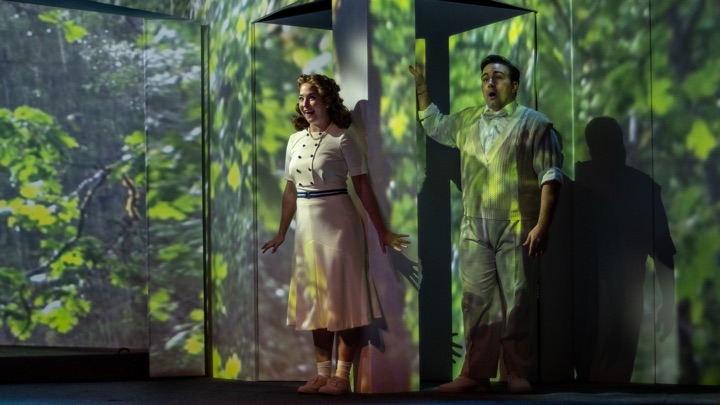 The Garden of the Finzi-Continis, Ricky Ian Gordon’s new opera, opened under the auspices of the New York City Opera at the National Yiddish Theater Folksbiene in Battery Park on Monday night and runs there through February 6. It is loosely based on the 1962 novel by

Giorgio Bassani and, to an extent, on the better-known 1970 film by Vittorio De Sica. Bassani disliked De Sica’s adaptation, as authors often do, especially with autobiographical material, and I’m sure he’d have problems with the opera as well. Changing the form tends to change the story being told—it has to. I attended the Saturday night preview performance.

Most of the characters in the opera are Jews of Ferrara, and the story proper begins in 1938, when Mussolini gave in to his ally Hitler’s racial obsessions and imposed many restrictions on the Italian Jews. The racial decrees are projected on the zigzag walls to make this clear to us.

The set consists of angled panels of varying heights, against which the walls of the Finzi-Contini estate, the overgrown garden, the battered and, later, restored synagogue, a sumptuous dining room and so on are wittily, cinematically projected, taking us instantaneously from scene to scene. Both ingenious set and projections are by John Farrell; the production is credited to Richard Stafford.

But it’s 1938. We know, even if the characters do not, how the story will end. Indeed, in the novel’s prologue, Bassani compared the aristocratic Finzi-Contini family to the Etruscans, glamorous but extinct, leaving their empty tombs. Ricky Ian Gordon, in contrast, opens his opera with a flashback in the reconstructed but empty synagogue of Ferrara and concludes it with the relighting of its eternal flame. Opera composers can make any story mean something new to make it their own.

Besides the Holocaust, the other shadow looming over the opera is De Sica’s prizewinning film, in which Dominique Sanda, as Micòl, personified the aloof Finzi-Contini dynasty. Her unresponsiveness to middle-class Giorgio’s passion was subtly compared to the inaction of Italy’s bewildered Jews. But the novel takes place inside the narrator’s head. The screenwriter (in an opera, the librettist), must invent words for what Giorgio seems to see. In the film, camerawork and Sanda’s icy beauty do this. In an opera, we need something in the music. 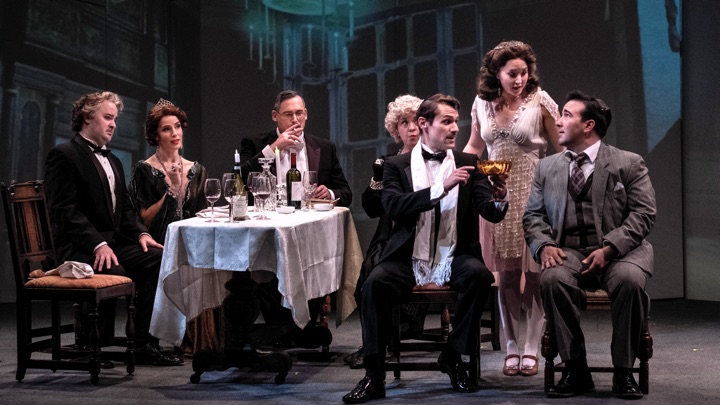 The opera is three hours long but feels like four. Gordon’s music glides along like scenic accompaniment but there is little in it to bring to life the figures whose tale he is trying to tell. He seems reluctant to allow them melody, personality.

Like many modern composers, he only permits melody when they are not being serious, when it is part of the local color, dance music, a drinking song in a frat-room atmosphere, religious prayers—which have always been background staples of opera. But when these people explore deeper emotions, the score lets them down. I’d like to hear Gordon’s take on the tale, but most of the opera might be by anyone.

There is a septet for young people playing tennis, at a point in the plot where the tennis match is highly significant—the Fascists have banned Jews from the public courts, so the exclusive Finzi-Continis open their private garden to them. The septet isn’t long but I was glad to have it; it felt like opera.

There is a graceful quartet for two pairs of ill-matched lovers, two of them chattering while the two who lust for them repress their frustrations—this is the section of the score that I hope will be excerpted for concert programs. But the reflective solo arias had slight charm or nuance, and the discourses on politics felt like filler. We don’t know who these people are—not memorably. Speeches will not tell us—we need music.

Gordon’s opera is set to a libretto by Michael Korie, who wrote The Grapes of Wrath for him and also the lyrics to Grey Gardens and Flying Over Sunset on Broadway, and the words to Stewart Wallace’s opera Kaballah, a piece I enjoyed and would like to revisit. But I was not thrilled with his work on Finzi-Continis.

There are scenes in chunky couplets, several steps from the poetic, and the storytelling does not flow smoothly. The opera feels overstuffed with plot and time references. Instead of cutting extraneous incidents for clarity, the usual aim of opera libretti, this one ambles about the garden, dabbling now in Bassani’s story, now in De Sica’s, now in the sexual frustration, now in the fraught, forgotten politics of Italy. It feels aimless, diffuse and far too long. 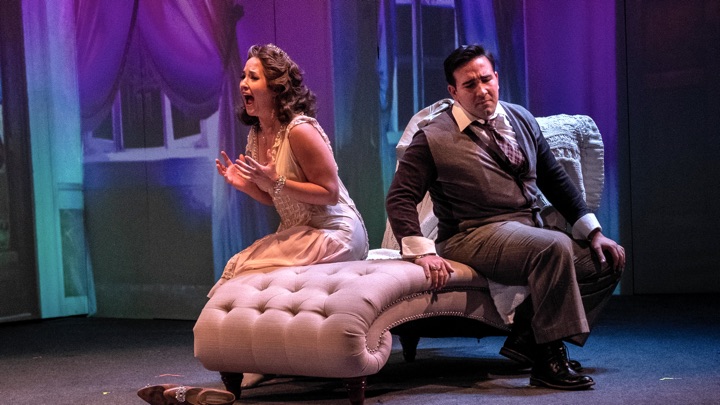 Giorgio is a middle-class Jewish young man who, for years, has had a crush on Micòl Finzi-Contini, the elusive daughter of Jewish aristocrats who live in a walled palazzo estate. And while they and their friends play tennis, work towards academic degrees and squirm under the new racial laws, the political situation turns ever more ominous.

Giorgio is befriended by Micòl and her invalid brother, Alberto, and is permitted by their scholarly father, Professor Ermanno, to use the family’s splendid library—but he feels they are holding him at arm’s length, and Micòl takes another man for a lover. The Finzi-Continis hold the world at arm’s length, while they can. In the penultimate scene, taken from the movie, they join the remaining Ferrara Jews to board a sinister train in 1943.

Bassani’s plot was already indirect, based on perception rather than action, and it has been gussied it up with episodes that expand this, explain that, underline this, extend that—perhaps to set us in a moment in history that Americans probably do not understand. Certain scenes feel interminable or awkward. The futile background political discussions—why are they here?

It’s an opera; they’re not necessary. Mama complaining about or to the servants—we don’t need the gentile servants leaving, or three scenes with a deaf Jewish cook; two lines would say it all. There’s a fortune-telling sequence at a seder—if the music chilled the blood, this might be fine. It just meanders.

All these side stories distract us from the energy of a theater piece. It feels as if the rabbinical intrusions have been written in to please a sector of the audience, Alberto’s aria of frustrated homosexual desire (very well sung though it is, by Brian James Myer—and isn’t it great to have a gay man sung by a baritone not a countertenor for a change?) has been squeezed into a story about other people only to please yet another sector of the audience. As a theater piece, Finzi-Continis wanders.

The singers all gave pleasure and deserve special kudos for performing so healthily on the coldest night of the winter, last Saturday. Rachel Blaustein has the unenviable task of impersonating Micòl, but Korie and Gordon have not rendered her superhuman. She must chatter and flirt instead of strolling, untouchable, a foot or two in the air.

Micòl is enigmatic—which suits the character—but the composer has given her very little that is memorable to sing. Blaustein’s soprano is agreeable and agile and even, though it thins out at the top. A melody expressing ennui, repeated and entwined with others, might have done the trick.

Anthony Ciaramitaro boasts a full-bodied leading man tenor, dark and clarion, that sweeps away all argument when impassioned. This makes it easy to feel his frustration with what Giorgio reads as Micòl’s indecision—actually, she’s just trying to let him down easy. His near-rape of her—a shock in the opera as it is in the book and in the film—feeds an instrument that seems designed for Tucker roles.

Matthew Choof, tall and slim, has the leading man looks for the insufferable Malnate, everybody’s friend with an assortment of benefits. (He knows all the whores in town.) His light opera-plus-musicals baritone sets him up for the charming trio about the ladies the guys knew in college—and he may actually have known them.

Franco Pomponi sings the thankless role of Giorgio’s father, who intones on politics and can’t quite believe what is happening to his world. Are Gordon and Korie warning us all not to be too complacent? Well, yes. But in the opera, these scenes ramble rather than arouse.

The problem for all these singers and a large, talented supporting cast is the angular, unmemorable score. As in Intimate Apparel, which I saw the previous night, Gordon seems to be uneasy with melody. Only frivolous (or, in Finzi-Continis, Fascist) characters resort to tunes; heart and soul are expressed in declamation.

This means that distant Fascisti singing “Giovanezza” stand out, and if you know the song’s history, bring a shudder—but it’s also the pleasantest tune all night. It is contrasted, in the scene, against the “Shema,” intoned by a rabbi (Spencer Hamlin), and this makes the act curtain highly effective. I’m glad Gordon realized he needed a melody to highlight the climax. But his melodies are borrowed.

The costumes are attractively in period, but I query the tacky tiaras on the ladies at their seder. I’ve never seen a tiara at a seder, and surely the Finzi-Continis would have better taste. They’re great ladies not drag queens.

Rumor has it that there is considerable interest from other companies in giving this opera. That’s good news; singers could certainly use the work, the production (if it travels) is first rate if they’d lose the tiaras, and the time between now and subsequent performances could be used to cut half an hour of filler from the score.

But for an opera about the persecution of heroic Jews, Halévy’s La Juive can easily be updated and packs far more punch. I’ve seen it five times, plus video, and I’d see it again in a heartbeat.