Two hours of bedazzlement await you. 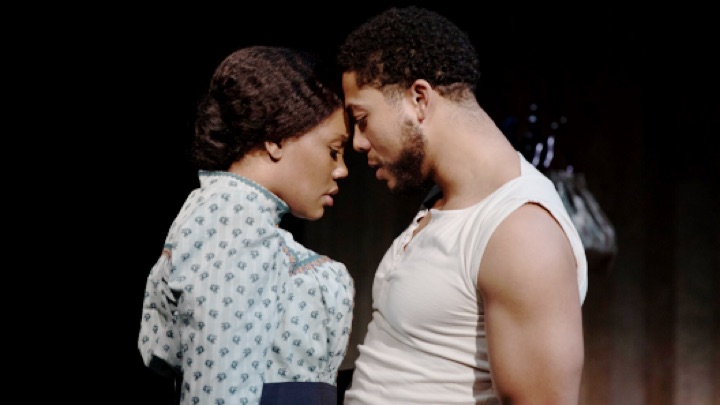 Do you love the sound of a superbly trained singing voice filling the room around you? Then head on over to the Mitzi Newhouse Theater underneath the Vivian Beaumont (Lincoln Center Theater Company) for Ricky Ian Gordon’s new opera, Intimate Apparel, through February 27.

Those who cast it chose wisely and well, and you will be cushioned in sumptuous sound. These singers have been around us for a while; all they’ve wanted was a chance to show what they can do. Let them. Two hours of bedazzlement await you.

It helps that Mr. Gordon knows how to write for the voice, to celebrate its bloom. This is not so common a skill among contemporary composers as it might be. He has given the world a great many art songs whose popularity with singers is testimony to his skill, and he has also composed several operas, at least one of which—The Grapes of Wrath—earned kudos and popularity, and has not sunk without a trace, as so many modern operas do.

Intimate Apparel is based on a play by Lynn Nottage, who has a brace of Pulitzers to her credit, plus a MacArthur. She has turned her play (which I missed in its local run) into a libretto, and she has done so without (it seemed to me) falling into traps of doggerel couplet. There are one or two minor plot points that were not clear to me on first hearing, but in general the plot is direct, the arc of action is clear, and it leads to a stunning Act I finale.

I could have done with more concerted numbers—duets, trios and so on—permitting voices to blend without obscuring meaning, but this is something librettists might do (fewer and fewer of them nowadays), and if the composer didn’t ask for it, it might not have occurred to Nottage to devise it.

The staging is by Bartlett Sher: a turntable on which Michael Yeargan’s props are introduced and dismissed with dazzling speed, so that we are in a tiny bedroom, a vast saloon, a shop on Orchard Street, a Fifth Avenue boudoir by swift turns, plus projections when we’re out of town. The costumes are by Catherine Zuber, who has rather a penchant for hues of purple and pink—but how else do you gussy up a corset? 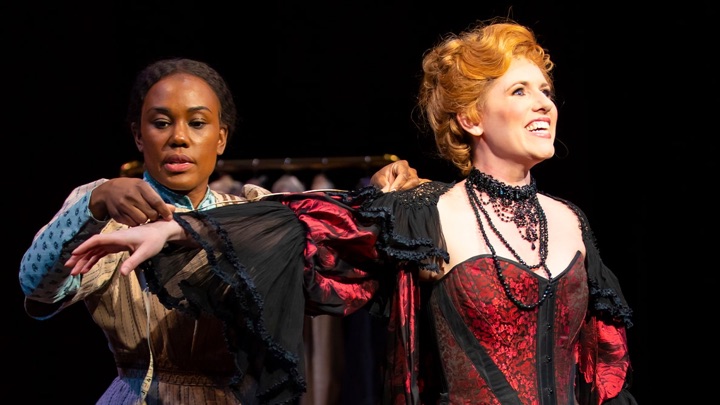 It’s 1905, and we have that old chestnut of a romance by letter. George Armstrong, at work on the Panama Canal, writes letters about his life and yearnings to an unknown woman, Esther, a seamstress in New York. She is doing rather well for herself, sewing fancy underclothes for Fifth Avenue matrons and Harlem ladies of the night—intimate apparel. But does she understand men? Well, not intimately.

It wasn’t clear how George got her name—her church was involved—but she is touched by his letters, when they are read to her—she is illiterate. She has, however, literate friends who write her answers, which leads to some musically amusing dueting. It also sets up a tension: will Esther tell George, when they meet, that she never wrote those letters?

For meet they do, of course, and (another point on which I was not clear) they marry on the day of his arrival in New York, the climax of Act I. Surprise! (You guessed this, yes?) He didn’t write his letters either. They have nothing in common. In the 1930s, marriage being sacred, they would make it work and fall in love. But times have changed; Esther is sadder but wiser. She may be down but she’s sure not out.

There’s a situation in Act II that seemed to cry out for a librettist familiar with operatic tradition: Five people (plus another two or three offstage whom we never meet) have each fallen in love with the wrong other person. What this situation seems to need is a quintet; Lorenzo da Ponte would have been over the moon, and he wrote such plots for half a dozen composers. Mozart may be overbooked, but there’s Salieri, Martin y Soler, Paisiello. Melodious mayhem would ensue.

But Nottage did not perceive this opportunity and, to be fair, hardly anyone in the libretto game nowadays would see it either. And Gordon felt no need for it. There is a lovely brief trio for three spectacular sopranos, hinting at what delight this composer could provide if he cared to, and there are similar concerted movements in The Grapes of Wrath that may be accessed on YouTube. A concertato is fun—and lyrical drama should be musical fun.

Gordon appreciates the qualities of the human voice—not merely among his soloists, all of whom are given opportunities to soar, but also in his minor figures, doubling as chorus, who occasionally hum or expostulate in the background while some scene or other takes place in the fore. The opera is accompanied by two pianos rather than an orchestra, and the atmospheric humming or raging seems to stand in for what would be orchestral idiosyncrasies in a different score. 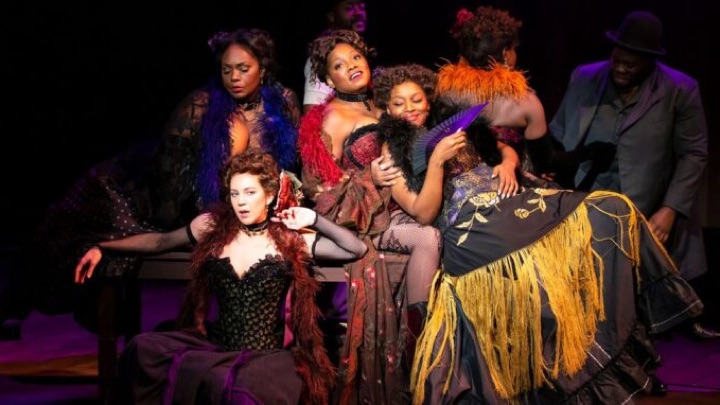 Kearstin Piper Brown (who has sung Aida and Micaëla, to give you an idea of her Fach) is Esther, our principal character. With no hint of strain anywhere in the scale, she floods the Mitzi Newhouse with sensuous velvet, assured and true from top to bottom, and enacts a woman sure of her value in a jumpy society, feet on the ground, eyes on a future.

We may as well point out that the Newhouse is a very small theater, but it feels grand when the singers open up, filling every cranny with sound. I last attended an opera in this space 50 years ago, when the “Mini-Met” presented Four Saints in Three Acts here (a small orchestra hid in the shadows), and the acoustic was memorable then as now. It is the ideal size for chamber operas, which get lost in the Met.

Ms. Brown’s Esther is accompanied and confronted by three ladies with voices of similar amplitude, all of them well written, all of them giving great pleasure. Adrienne Danrich sings Mrs. Dickson, the hostess—is she merely a householder or a madam? This is unclear—of the house where Kearstin Brown’s Esther plies her needle, and she presents us with an autobiography in song to flesh out her consoling words to the heroine.

Krysty Swann, who has taken many small roles at the Met, delights in letting herself go, with some jazzier inflections, as Mayme, a woman of languid pleasure. Naomi Louisa O’Connell is the Fifth Avenue aristocrat who hopes Esther’s creations will recapture her husband’s affections. (They don’t.) When Esther is on the brink of matrimony, it is these two unlikely friends who join her in a trio that delectably hints—merely hints—what glories this score might have held had Mr. Gordon been a little more old-style.

To the male singers—and they too are extraordinary—Nottage and Gordon have been far less generous with vocal opportunities. Justin Austin brings a grainy, masculine baritone and a highly physical actor’s presence to the pivotal role of Esther’s no-account husband, Armstrong—Nottage makes him weak, not wicked—and as Rossini would say, “L’occasione fa il ladro,” opportunity makes the thief. (Too, Miss Swann’s Mayme is a worthy temptation.) Austin gives a strong performance as a weak man.

Arnold Livingston Geis ably sings the important role of the Orchard Street cloth-peddler, Mr. Marks. Marks is Orthodox—which means he must not on any account touch a woman to whom he is not related or married—and he is betrothed to a woman he’s never seen back in the Old Country. (Is this the opera’s theme?)

He rejoices in selling fine fabrics to Esther, and she is thrilled at his regard and formal manners, but there are necessary constraints to their utterance, and Geis doesn’t get much in the way of lyricism to explore his feelings. This is another place where a quintet of unrequited lovers might have come in handy.

Intimate Apparel will hold your attention as the plot works itself out. The characters are well rounded and the vocal display from all hands provides delight. There is no straining for high notes or low ones—every singer knows just what they’re doing. I could only wish Gordon were not so tunefully parsimonious, that he had provided something meatier than arioso and declamation for such fine performers.

When, in a saloon scene, a ragtime strikes up, our ears perk to hear it—but these are low-class, frivolous people on a frivolous occasion. Serious characters with love on their minds sing arioso. John Harbison did that in his Great Gatsby—frivolous people sang enjoyable 1920s pastiche, and then Gatsby and Daisy came in singing recitative, and we didn’t know who they were, we just wanted them off our stage.

Intimate Apparel is a whole lot better than Gatsby—it is far more theatrical—but that puritanical dislike of melody distresses me. I did wish these amazing ladies at the Newhouse were singing Verdi. They will, of course, in time.