When you wish upon a scar

So that there’s no confusion: the Long Day’s Journey into Night seen here is contemporary, political, brutal, and universal. 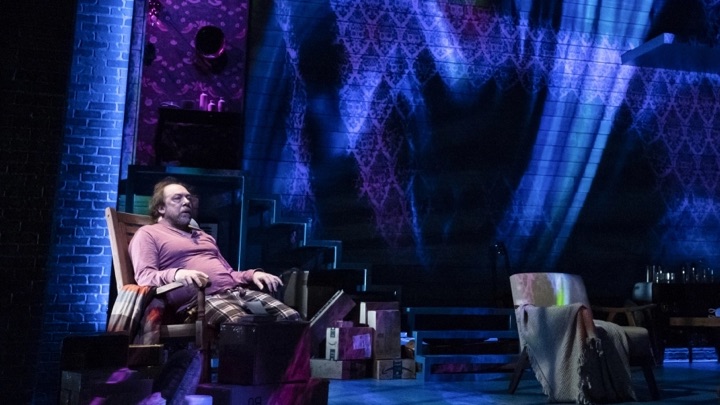 Lest there be any doubt, the audience is confronted upon entry with a large television screen showing a stream of CNN clips about the pandemic, Trump’s infuriatingly half-hearted efforts to calm our fears, and other confounding, enraging issues. From there—it gets worse.

Director Robert O’Hara’s rethinking of Eugene O’Neill’s epic memoir—“a play of old sorrows, written in tears and blood,” as the author himself called it—has at its core an idea both simple and utterly game-changing. The Tyrone family in O’Neill’s original play, about whom he wrote so candidly, was an artistic exorcism made still more poignant because they were understood to be a barely veiled depiction of Eugene’s own parents and brother. O’Hara’s Tyrones could be anybody. And the time could be now.

So… banish your expectations of the shabby gentility of a 1912 family, living with at least a superficial semblance of culture and decorum. The Tyrones we see at the Minetta Lane Theatre are brash, sloppy, angry—very much a microcosm of America today. The empty stage that greets us is a good example of this disconnection. In addition to the television, the space is littered with (among other things) Amazon and FedEx delivery boxes, a yoga mat, and Starbucks coffee cups. It doesn’t imply affluence exactly—the house is a mess—but it places these Tyrones squarely in a consumerist culture quite different from the original family’s much-discussed penury.

O’Hara may be a provocateur, but he’s a brilliantly gifted one. This is no LDJ for purists, and no one who knows this director’s work would have expected one. But he’s very much onto something profound. 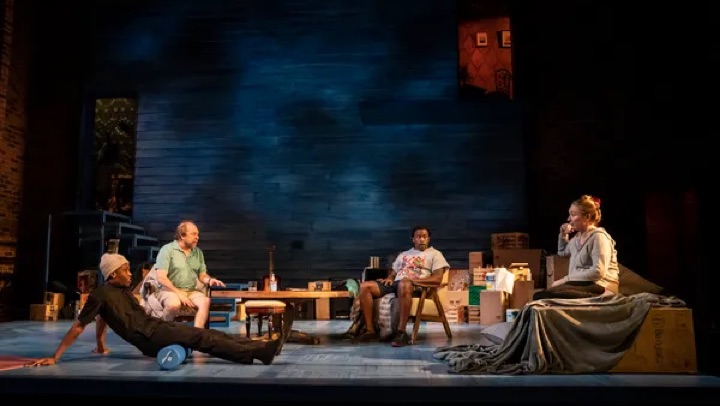 For at least the first half of the show, I was entirely in its thrall. O’Neill’s language, heavily cut here but otherwise all but unchanged, rings eerily right in today’s setting. Bill Camp (as James Tyrone) isn’t the fading matinee idol we associate with the role, but his marvelously earthy grounded-ness works wonders on the familiar scenes.

Elizabeth Marvel (Mary Tyrone) limns the character’s drug addiction, as well as her devoted but passive-aggressive relationship to the rest of the family, with a ferocity I’ve never seen before. Ato Blankson-Wood (Edmund) and especially Jason Bowen (Jamie) have a nonchalant brotherly chemistry that’s just right for the more casual mood O’Hara is evoking.

Most of all, this production preserves and even amplifies a core theme in Long Day’s Journey. In O’Neill’s world, the American aspiration that every generation will gain from the love and sacrifices of the previous one is a myth: Jamie and Edmund, bearing scars inflicted by James and Mary, are clearly going to face more obstacles than their parents did. O’Hara’s gloves-off approach sharpens this still further—as does the casting of Black actors as Jamie and Edmund (Camp and Marvel are White).

A particular moment around 20 minutes into the show visually encapsulates O’Hara’s layering with heart-stopping immediacy. Above the left side of the stage, a window is cut into the back wall, which gives us a shadowy glimpse of a graceful old room that might come straight from O’Neill’s script. It is this space where Mary comes to shoot up, which we see only from back, but with unflinching clarity. As she ties off the tourniquet upstairs, in the room below we see the brothers laughing and drinking—and the timeless connection between O’Neill’s Tyrones and O’Hara’s hits us right between the eyes.

Translating Mary’s drug addiction into the newer world of the opioid epidemic resonates seamlessly. O’Hara’s other transposition—in which Edmund’s consumption diagnosis becomes COVID—doesn’t work as well. Though it lends itself to some powerful images, like James grabbing a mask when he’s near Edmund, the details of the two diseases just don’t track.

More generally, as we enter the final act the distance between O’Neill’s script and O’Hara’s re-envisioning becomes more problematic. James’ career as an actor is a key element in the original play. It mirrors the reality that James O’Neill himself had been famous for The Count of Monte Cristo, but he later bitterly regretted wasting his talent on a vehicle that was beneath him.

While there’s no specific reason something similar couldn’t happen here, it feels jarring—an historical detail that takes us out of the moment. Similarly, Blankson-Wood is less effective at capturing Edmund’s deeply poetic inner life. (I’ve yet to see an actor who actually suggested he would grow up to be Eugene O’Neill, which of course is a tall order.)

O’Hara has made many cuts in O’Neill’s script—this Long Day runs just under two hours and is performed without an intermission—but I wish he’d actually cut more. The show works best when it’s a race to the end, and as close to Everyman as it is to The Iceman Cometh.

But the best of O’Hara’s Long Day is wrenching, illuminating, and will remain with me for a long time.