Part vaudeville, part opera concert and part drag ball, Heartbeat Opera's pageant was like a cup of eggnog spiked with a dash of LSD. 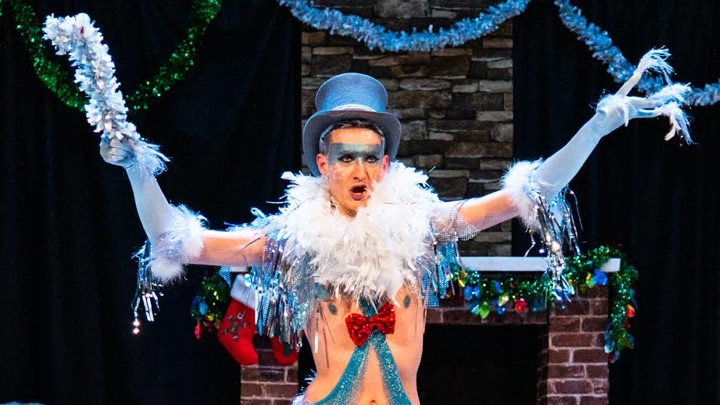 Heartbeat Opera had cancelled all performances after December 2019 (for reasons only too well known to us). But the seventh edition of Heartbeat’s annual holiday drag extravaganza returned in 2021 for three shows at Roulette Intermedium in downtown Brooklyn.

Usually a goth pageant for Halloween, this year it was pushed forward into the Christmas season with “The Messy Messiah” revue scored not only by Handel but Tchaikovsky, Johann Strauss, Vivaldi, Purcell, Vince Guaraldi, Hugh Martin & Ralph Blane and more. Part vaudeville, part opera concert and part drag ball, this year’s drag pageant was like a cup of eggnog spiked with a dash of LSD.

As a Yale undergraduate, Ethan Heard (Co-Founder & Artistic Director of Heartbeat Opera) sang in the Whiffenpoofs while serving as artistic director of Yale Cabaret, where he began the beloved “Yale School of Drag” tradition. His talents as a drag impresario moved into the New York opera scene when Heartbeat Opera came into being.

Heard also wrote (with Music Director Jacob Ashworth) and directed “The Messy Messiah” putting his distinctive punk/glam/genderqueer stamp on everything onstage. Looking chic in a sequined black pantsuit with slicked back Liza Minnelli circa 1983 hairstyle, Heard wandered through the crowd like an androgynous disco host/hostess with the mostest.

“The Messy Messiah” opens on a “The Night Before Christmas” tableau of a living room decorated for the season with stockings over the fireplace, Christmas tree and easy chair with treats set out on the side table for Santa. A runway juts into the auditorium for our soloists to vocalize, vogue and sashay. 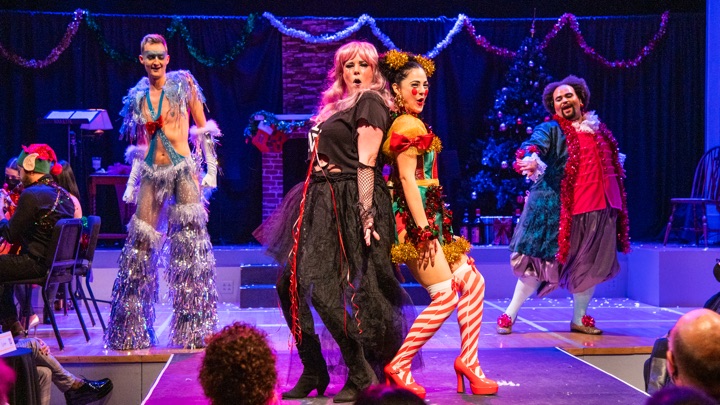 Paige wonders why can’t Christmas shows be fun, fabulous and festive with a “peppermint twist”? Ashworth and Schlosberg dismiss Paige’s queries and depart with a teasing “sweet dreams” farewell. Paige sits down in his comfy chair to consume milk and cookies. After writing his Christmas wishes to Santa in his diary, Paige falls asleep while visions of sugar-plums (and other things) dance and sing in his head.

The lights dim and some musically trained Christmas elves drop down from the chimney, grab their instruments and launch into an overture medley (segueing from Die Fledermaus to “A Charlie Brown Christmas et al. as arranged by Schlosberg). The orchestra (led by Ashworth on first violin) sounded a bit scratchy in the discordant opening bars but settled into smoother ensemble playing as it progressed.

Paige returned in a pink waistcoat and breeches with frills and furbelows to open with a very “extra” version of “Comfort Ye/Ev’ry Valley” strutting the catwalk with jazz riffs, voguing hand jive and twerking. Paige’s mellow tenor is baritonal and covered on top – perhaps “dusky” and “husky” as a certain New York Times critic would opine.

The Puerto Rican-born soprano always has lots of sunny charm onstage, natural adorability and a silvery soprano with a quicksilver fast vibrato. A few of the high notes forced that vibrato into a flutter but Alicea was the best dancer/mover in the singing cast (with the best legs).

Mezzo Alissa Anderson, a goth wraith in black cape, emerged from the audience bearing a lamp like the Goth Ghost of Christmas Past intoning Samuel Barber’s ode to seasonal affective disorder: “Must the Winter Come so Soon” from Barber’s Vanessa. Anderson’s resonant round-toned mezzo was perhaps the best natural instrument in the cast with old-style plummy anglicized diction in the Dame Clara Butt oratorio contralto tradition. 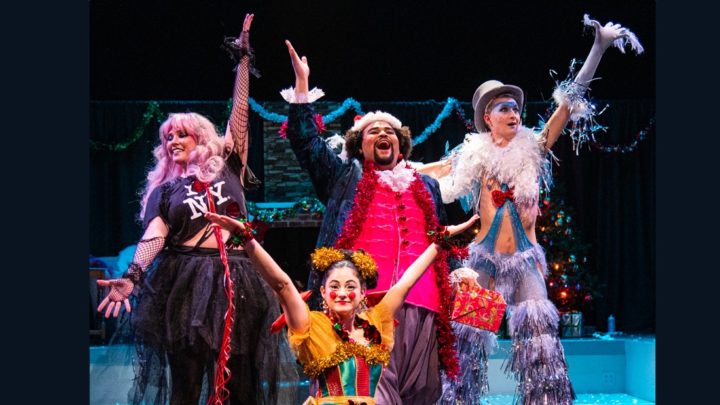 Leggy burlesque ballerina Jourdan Epstein was the best dancer (naturally) with her high kicks, shapely muscular gams and dizzying pirouettes in excerpts from The Nutcracker culminating with a promenade en pointe over a row of magnum champagne bottles. Ms. Epstein was later the object of a Sapphic foot fetish interpretation of “How Beautiful Are the Feet” sung by Alicea and Anderson. Choreographer Eamon Foley made the singers move like dancers and Epstein’s body sing.

On the opening night gala on Thursday December 16, the super-secret opera star mystery guest was Anthony Roth Costanzo done up in metallic gold face paint and matching gold loincloth like a go-go boy Cupid – I attended the Friday early show on the 17th. (The opening night gala was professionally filmed and was available for streaming here: – most of the past Heartbeat productions were filmed and can be streamed on demand.)

The costumes by Fabian Aguilar (assisted by Asa Benally) were showstoppers in their own right with a masterful use of recycled materials with a large amount of lamé cloth, feathers, glitter and fishnet.

The evening ended with a series of ensemble numbers including the obligatory “Hallelujah Chorus” from Handel’s “Messiah”, a nod to gay icon Judy Garland with “Have Yourself a Merry Little Christmas” from Martin & Blane’s Meet Me in St. Louis and as an encore “Goodbye, Farewell” Act One trio from J. Strauss’s Die Fledermaus.

Hopefully, Heartbeat Opera will return to New York City with a revival of their acclaimed “Black Lives Matter” interpretation of Beethoven’s Fidelio on February 10, 12 & 13 at The Metropolitan Museum of Art NYC with the intriguing film/opera collaboration “Quando” hopefully coming in April 2022.

The beginning of 2021 promised a light at the end of the tunnel but ended with us once again in darkness due to the emergence of the Omicron Variant Grinch Who Is Stealing Christmas. Possibly we will see another cancellation of public performances as we did in 2020.

But for a bright moment in downtown Brooklyn, we were able to celebrate the season with Heartbeat Opera in a gay and festive communal gathering banishing all somber fears for the future.

“The Messy Messiah” was made possible with support from The Lesbian, Gay, Bisexual & Transgender Community Center.