The river of dreams

The opera utilizes the idea of “magical realism," telling a realistic story combined with elements of magic and fantasy. 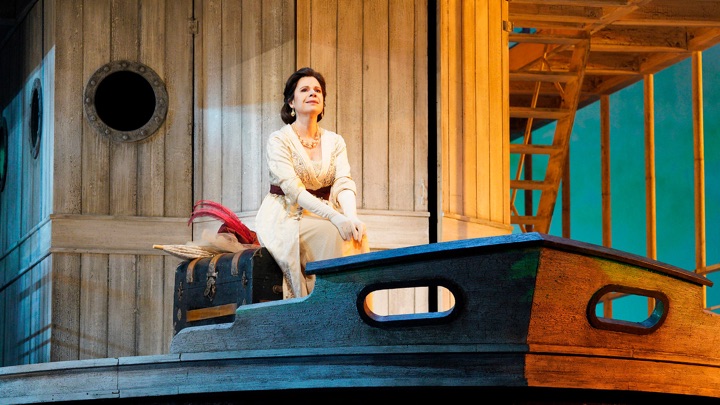 On November 13, Lyric Opera of Chicago opened the first Spanish language opera in its history, Daniel Catan’s Florencia en el Amazonas, which I viewed at the matinee of November 21.

The opera utilizes the idea of “magical realism”, telling a realistic story combined with elements of magic and fantasy as popularized by the writer Gabriel Garcia Marquez, particularly in his Love in the Time of Cholera, set on a boat with characters searching for lost love, as is one of the themes of Florencia.

In fact, director Francesca Zambello, Catan, and his librettist Marcela Fuentes-Berain journeyed to Colombia in the 1990s to visit Marquez and devise many of the ideas for this opera.

The plot centers around opera diva Florencia Grimaldi and her fellow passengers on a riverboat in the Amazon, journeying to Manaus, Brazil, hoping to hear the diva sing. On route, Florencia reveals that she is seeking to find her lover Cristobal, a butterfly catcher who has gone into the jungle in search of the rarest butterfly, the Emerald Ruse.

Also on board are the ship’s captain, a young author Rosalba, who is writing a biography of Florence Grimaldi; the captain’s nephew Arcadio, who wants to leave the river and become a pilot; a middle-aged couple, Paula and Alvaro, desperate to save their ailing marriage; and finally, Riolobo, a mystical character who describes himself as “a creature of the river” and is capable of morphing into many forms.

The opera is an exploration of the various aspects of love (passion, obsession, longing, reconciliation) as each character seeks to find real love on this journey. 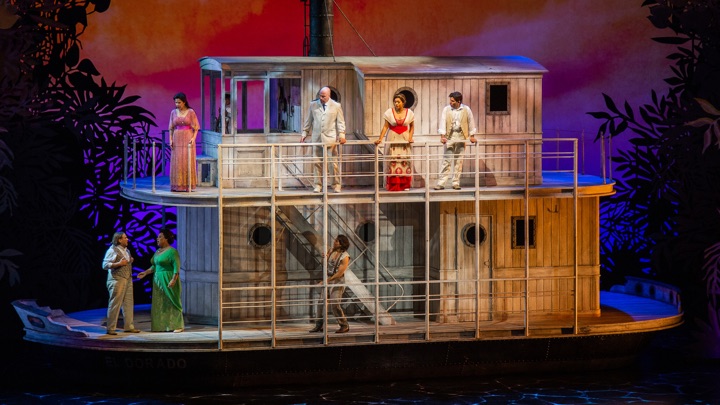 The production is simply marvelous, a feast for the eyes and ears. We are greeted with a cartoon-style but beautiful show curtain, showing lush vegetation of the Amazon, even with pink birds gliding by. This curtain rises to show a very realistic steamboat surrounded by this same vegetation.

With the Lyric’s turntable the boat turns to reveal multiple locations and scenes both public and private. This brilliant set by designer Peter J. Davison, combined by colorful, evocative lighting by Mark McCullough and the fanciful and beautiful projections of S. Katy Tucker, create the perfect environment for the opera.

When I walked out for intermission, I must have heard ten patrons say “spectacular.” And, indeed, it was. Kudos to Director Zambello for bringing all these elements together into a unified whole.

Another brilliant element was the use of dancers who represent the spirits of the river and, sometimes, the river itself. I only counted five dancers, but the program says they were seven.

Using the intricate and delicate choreography of Eric Sean Fogel, the dancers created one of the magical elements, undulating like the water, and participated in the action (catching Rosalba’s book which has fallen overboard and returning it to the hand of Arcadio, carrying off Alvaro who has been thrown overboard in the storm). The dancers were marvelously effective, especially the lovely Akua Noni Parker.

Catan’s rich, lush score includes potent Straussian crescendos as well as sparkling light music fitting perfectly with the movements of the river, and I also felt the influence of Puccini and a bit of Britten.

The Lyric Opera Orchestra plays it beautifully, from softness to climaxes, though I thought that debuting conductor Jordan de Souza should have restrained the power of the orchestra, especially at the beginning, when I struggled to hear several of the singers, particularly the Riolobo of Ethan Vincent, whose fine baritone could be heard easily during moments of repose in the music.

But the opera is really about love as Florencia tells us in her first aria that she has left her lover Cristobal to go for fame and fortune as a singer, and now wishes to return to find him again. Rosalba and Arcadio enkindle a romance, though both are frightened to give in to their feelings.

The bickering couple Paula and Alvaro are failing in their quest for reconciliation until Alvaro is thought to be lost to the river and, magically, he is returned by the river spirits, called back by Paula’s longing voice.

Ana Maria Martinez sang warmly and tenderly as Florencia in a deeply felt performance, her ringing soprano perfect throughout the registers and capable of passionate outburst as well as womanly softness. At times, I felt her Florencia was a bit too restrained, but she simply glowed with her powerful presence.

Vocal honors go to debuting Gabriella Reyes as Rosalba, her lush, shimmering soprano capable of sailing over the most dense orchestrations, seemingly effortlessly. Her Rosalba was simultaneously a spitfire and an innocent, and she produced voluminous high notes without a hint of strain.

I also enjoyed Mexican tenor Mario Rojas as her would-be lover Arcadio, producing beautiful, burnished tone and acting with passion and skill. Raymond Aceto’s booming bass was perfect for the Ship’s Captain, his solid and steady presence and sound balancing the passenger’s fears.

A bit less successful was Deborah Nansteel’s Paula, whose rich mezzo should have created much more as she longs for the lost Alvaro, but the aria was a bit wobbly and bland. Levi Hernandez as Alvaro has a fine baritone sound, but also seemed pallid—the bickering scenes between him and Paula were more annoying than satisfying dramatically.

Ethan Vincent provided a fine physical characterization as the shape-shifting Riolobo, and provided a stunning ending to Act One as he transformed into a river spirit-bird flown in to assuage the river spirits to end the storm. Now that was magical realism.

I must admit to having some problems with the libretto. It is appropriately poetic, but far too much given to philosophical platitudes about love, sometimes obvious and sometimes repetitive.

In Florencia’s final monologue, for instance, she sings over and over lines meaning “You must be here, because my song isn’t ended”, rephrased and rehashed but still the same. This was the only time in the opera that my mind meandered despite Ms. Martinez’ riveting performance.

But all was made well in the final, magical tableau, as huge multicolored butterflies representing Cristobal’s spirit descended to surround Florencia, who then seemed to spiritually reunite with him. It was a moving and visually gorgeous end to a very satisfying afternoon.