There is sensory overload, and very little humanity. 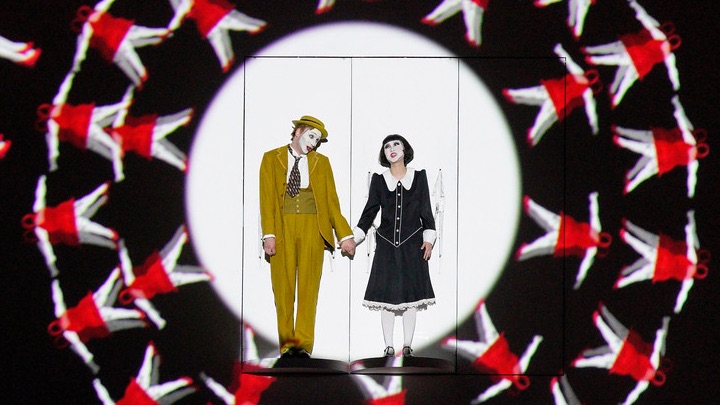 After nearly ten years and appearances in 35 different cities, Komische Oper Berlin’s production of The Magic Flute has arrived at Lyric Opera of Chicago. Directed by Barrie Kosky and Suzanne Andrade (revival director Tobias Ribitzki), this production of Mozart’s most famous work utilizes the performance group 1927, a company combining performance and live music with film and animation.

This is known as the “silent movie” production, utilizing cinematic visions combined with the brilliant animation work of Paul Barritt. The result is a visual feast teeming with color and humor.

Kosky and Andrade’s vision is clearly very well thought out and maintains an admirable consistency of ideas and theatrical effects. Barritt’s wildly inventive and clever animation (occasionally too clever) runs the gamut from monstrous serpents to flying pink elephants to a black cat that accompanies Papageno everywhere.

And yet, with all these fantastical elements, it really doesn’t work. There is constant distracting movement in the animation, and every sung image has to be displayed in a cartoon instead of the audience’s imagination. There is sensory overload, and very little humanity.

The spotlighted, white-face principals rarely have contact with one another. Every scene is over-decorated with business and swirling images—even when soprano Ying Fang sings her exquisite “Ach, ich fuhl’s”, the production encases her in a cartoon snow globe with a bleak, bare tree, as if the audience can’t figure out that she’s singing of despair and lost love.

And there’s no actual, physical magic flute; instead we have a Tinker Bell-ish female fairy trailing musical notes behind her.  By the middle of the second act, this reviewer began begging, pleading, longing for one single moment of stillness, a moment of repose with direct communication between singer and audience. Alas, it never came. What had begun as charming, interesting and intriguing imagery had by the end become distracting, and frankly, annoying.

There is better news on the singing and acting fronts. Fang, looking a bit like Louise Brooks in the fine costumes of Esther Bialas, utilized her silvery soprano to glorious effect throughout. As in her excellent Zerlina in Lyric’s most recent Don Giovanni, Ms. Fang exudes charm, grace, and innocence in her Pamina. 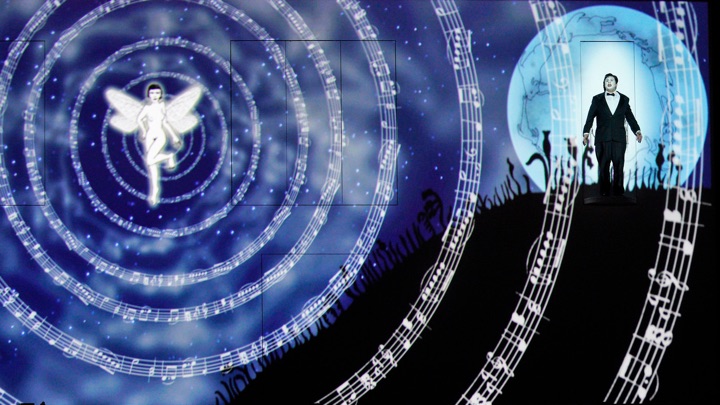 She is well matched by the Tamino of Pavel Petrov, who sang with a warm, burnished tenor and also inhabited his character’s youth and innocence. It was unfortunate that these characters were so isolated in this production; only when they embraced at the very end were they allowed human contact.

The audience seemed enamored of Lila Dufy’s Queen of the Night, and she certainly has the requisite stratospheric high notes for her two arias, but the voice turns cloudy and dull in the middle and lower registers. She was somewhat hindered by being encased in a cocoon (she was embodied as a giant black spider) with animated arms, again throwing out cartoon knives to illustrate her coloratura.

One of the bravura performances of the afternoon was Huw Montague Rendall as Papageno, Using his potent and flexible baritone to great effect, he absolutely threw himself into the physical comedy of the role and was genuinely funny and affecting. He interacted convincingly with the animated characters and seemed to best embody the spirit of this production, often channeling Buster Keaton.

Looking remarkably like Abraham Lincoln, bass Tareq Nazmi portrayed the wise Sarastro with great gravitas and a powerful sound and no fear of the sepulchral low notes of this formidable role. His “O Isis und Osiris” was a highlight. Quite delightful was Brenton Ryan as Sarastro’s nasty servant Monostasos, made up as Nosferatu and gamboling about the stage with his fine character tenor.

Further fine support was given by Mathilda Edge, Katherine DeYoung and Kathleen Felty as the Three Ladies, and Denis Velez as a flapper-like Papagena.

The formidable Lyric Opera Chorus under Michael Black sang, as always, with great precision and superb diction. The Lyric Opera Orchestra played brilliantly in a buoyant, lively, detailed reading of the score under the baton of Lyric debutante conductor Karen Kamensek. I hope she returns to Lyric soon.

This production would be a great intro to opera for children, who might be fascinated by the extraordinary visuals. Also for opera newbies, it might attract a younger audience to the House.

It ain’t easy being tween