Morning Sun often feels as occluded and distancing as the austere, featureless set on which it’s performed. 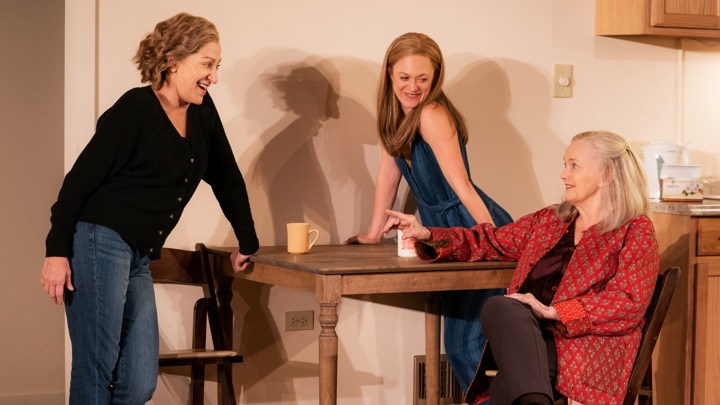 CAMERON KELSALL: You can tell a lot about Morning Sun by its set. Simon Stephens’ world-premiere play, the first Off-Broadway offering from Manhattan Theatre Club since the pandemic began, bills itself as a love letter to Greenwich Village and to three generations of tough-as-nails New York women who overcome personal flaws and societal pressure to live unique lives. Yet the scenic design, credited to the collective dots, more closely resembles a nondescript Midwestern church basement: fraying wall-to-wall carpet, a few folding chairs shoved in a corner, an upright piano (adorned with plastic plants) that nobody seems to play. The visual component lacks vibrancy and specificity, and Stephens’ elliptical script, with dialogue that falls somewhere between direct-address and jumbled second-person memories, fails to compensate. Despite the service of three accomplished stage actors—Edie Falco, Blair Brown and Marin Ireland—Morning Sun often feels as occluded and distancing as the austere, featureless set on which it’s performed.

DAVID FOX: I’m with you on all of this, Cameron—including what I sense is your implied frustration because there’s a lot here that I really want to like. The premise intrigued me from the start. Morning Sun immerses us in the connected lives of three matrilineal generations of women. They are in many ways ordinary working-class characters, New Yorkers only because the action begins long enough ago that it was possible for the not-rich to live in Manhattan. These characters—and peripheral others, including husbands and friends—are embodied by three actors who are listed in the program and script simply as 1, 2, and 3. Stephens’ play is often jumpy and disjointed, realistic in some ways and abstract/metaphoric in others (as you say, very much like the set)—though to its credit, the stories are ultimately cohesive and quite moving. But he employs my unfavorite technique of having the actors serve as both narrators and characters, which from the start compromises Morning Sun‘s effectiveness. And that’s not my only issue. I found the writing verbose, mawkish, and manipulative, and the artifice so glaring as to undercut the show’s many virtues, including two sensational performances.

CK: It should be noted that Stephens, a highly accomplished playwright whose Curious Incident of the Dog in the Night-Time won five Tonys in 2015, is British. From what I can tell, this is his first play set in America, and he falls into a trap of over-reliance on shorthand and cultural references to patch deficits in his knowledge of New York history. I’ve found this a common trick of non-native authors, particularly since the kind of audience that subscribes to Manhattan Theatre Club loves nothing more than sighing affectionately at the mention of Jane Jacobs or “the theatre on Cherry Lane.” But it grows tiresome as a stand-in for the actual experiences of people whose lives allegedly encompassed some of the most consequential decades in the city’s history. 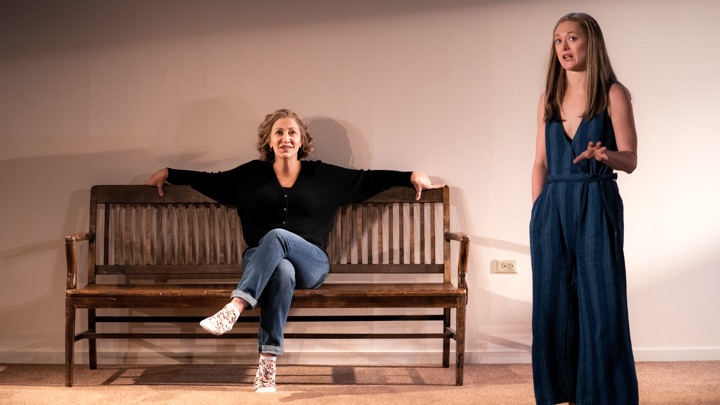 DF: Grrrr. The Jane Jacobs reference—and as you say, the collective sigh of nostalgia that greeted it—was a real buzzkill for me: almost a “check, please” moment. But I read it somewhat differently—not as Americana shorthand, but rather a cunning reference system to suck in an audience in their collective sweet-spot. In this, Morning Sun reminded me of the relentless name-checking of Adam Rapp’s The Sound Inside, which opened and closed last season. Two other plays also came to mind as I was watching. One is Edward Albee’s Three Tall Women, which likewise uses a trio of actresses (there called A, B, and C) to illuminate aspects of an ambiguous character; and Tracy Letts’ Mary Page Marlowe, which tells a somewhat similar story—an ordinary woman whose life is devastated by alcohol—using multiple performers in the same role. Both plays are, I think, considerably superior to Morning Sun.

CK: There are facets of Morning Sun that are undeniably derivative, and the lack of specificity in the writing does little to assuage that. As with Mary Page Marlowe, alcoholism threads through this play, although one character saying “You drink too much” to another every now and then is not the same as a detailed exploration of why people (especially women) turn to the bottle in times of distress. I found that aspect of the play particularly wanting, especially since Stephens seemed to suggest that addiction and secrecy might be at the root of the complicated relationships that span the generations. (There is a moment, too fleeting, that alludes to Brown’s character drinking to cope with the death of her brother-in-law, who might have been her actual true love.) In general, these issues underpin the play’s greatest weakness: it tries to be universal and singular at the same time, and in the end, it’s really neither.

DF: What all of this should make clear is that the pressure here is very much on the cast to give Morning Sun the inner life and gravitas it wants—and on that score, it mostly succeeds extraordinarily. Edie Falco has the lion’s share of the work, and she’s utterly riveting, supremely focused and infused with emotionality and profound concentration. Blair Brown’s approach is quieter but every bit as powerful. For these two fine actors alone, Morning Sun is eminently worth seeing. I’ve liked Marin Ireland a lot in other things, but here I found her performance echoing the fussy self-consciousness of Stephens’ writing.

CK: Ireland is an undeniably skilled actor, but I felt that all she was showing here was technique. She often dipped into stereotypical telegraphing when playing characters other than her primary role as Falco’s daughter and Brown’s granddaughter—giggly, high-pitched jollity for children… 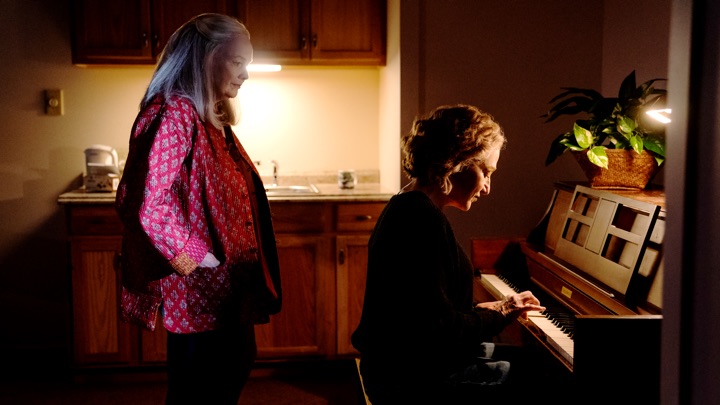 DF: Adults playing children is another theatrical gimmick I really can’t abide. It hardly ever works for me, and here is no exception.

CK: … gruff, whiskey-voiced swagger for men. I don’t think Lila Neugebauer’s direction, which had Ireland flitting around the set barefoot while Falco and Brown were allowed a measure of stillness and concentration, helped in this respect.

DF: The constant shifts in story and character are a real challenge for a director, and I’m not sure there’s a better way to do it than what Neugebauer has done here, but I still found it unsatisfying. Before we leave Morning Sun, I’ll share a cautionary tale for actors and audiences alike. At last Saturday’s matinee (one of the critics’ performances), a quiet, irregular but noticeable electronic beeping was heard persistently from somewhere in the house. Around an hour into the show, Ireland paused in mid-scene, held up her hand, and looked out. Speaking in the same hushed voice she was using on stage, she asked the audience to help find and silence the noise. The shift was subtle, at first almost imperceptible—I’m still not sure whether the other actors were aware of it. But for me, the net effect was the opposite of what was intended. For the remaining half hour or so—the play’s best—I couldn’t stop thinking about it. Would the noise come back? (It did—less often, but it was still there). Would Ireland comment again, maybe this time actually stopping the show? (She did not.) Anyway, the lesson here is that what was meant to solve a problem only made it worse. Ireland’s aside distracted me at just the point I should have been most in the grip of the play. A jarring moment in an often frustrating afternoon.