The people—I assume most of them were natives—seemed pretty happy at La Boheme at the San Carlo on Saturday night. For one thing, the theater was packed to the top tier, all of us masked (vigili di fuoco—firemen—made sure of that) 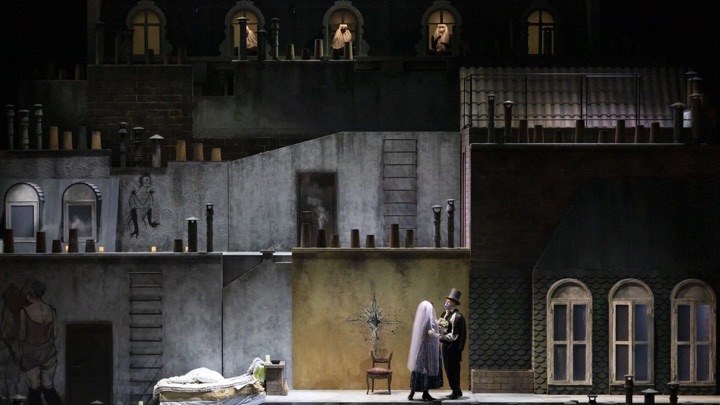 Carlo VII, the first Bourbon king of Naples, enfolded his opera house, modestly named the San Carlo, alongside the royal palace he was building at the same time. He appears to have regarded it much as the Byzantine emperors regarded the Hippodrome, an annex of home. His Majesty could watch the races (or the opera) without setting foot out of his territory.

More important, he could keep a finger on the pulse of the capital. If the king’s favorite prima donna (or an emperor’s chariot team) was acclaimed by the crowd, all was well. If they booed and catcalled or made ribald comments about a king (in an opera, any old king—that’s why Verdi’s Gustavus had to be demoted in the premiere of Ballo), it meant the natives were restless. Carlo was popular enough—except for his dislike of music, which bored him—but his descendants could always tell from the House when to draw, or loosen, a political line.

The people—I assume most of them were natives—seemed pretty happy at La Boheme at the San Carlo on Saturday night. For one thing, the theater was packed to the top tier, all of us masked (vigili di fuoco—firemen—made sure of that), vaccinations and temperatures checked, and the standing ovation at the end felt genuine. No royal musketeers commanded it!

The new production by Emma Dante found favor. You may wonder how far this Veristic opera can stray from realism, but she managed to be both literal and fanciful at the same time, with a commedia dell’ arte backstory presented by acrobats and dancers intruding on the action but never obstructing it. The rooftops and balconies of the first and fourth acts reminded me of Rear Window, with their skits and mimes that mimicked or reflected the plot, the while inserting symbolic props or actions. But the simple story made a clear impression, each serious or romantic piece of the puzzle falling satisfyingly into its ordained place.

For example, when the painter Marcello first enters (Andrzej Filo?czyk, the gallant possessor of a smooth and agreeable baritone), he is slapping the backside of a lingerie-clad model á la Dégas, with whom he has just been wasting some private minutes. A couple of dancers in chic gold pajamas perform pas de deux when Marcello is reunited with Musetta (Benedetta Torre, who has the ankles for the part as well as a luscious mezzo), then the dancers move into a proficient jitterbug when the lovers begin to quarrel.

The neighbors are hectic and impertinent during the fooling and feeding of the four bohemians, but they calm down when Rodolfo is alone and receives his unexpected guest. Rodolfo, by the way, was America’s own Stephen Costello, who fell last week on the slippery floor of the Galleria Umberto across the street, breaking his arm. He sang the role in a sling. It was clear that no organs of any importance—to singing, you know—had been damaged, but I did wonder how he’d finish writing that article and all those plays. (Maybe he’s a southpaw.) 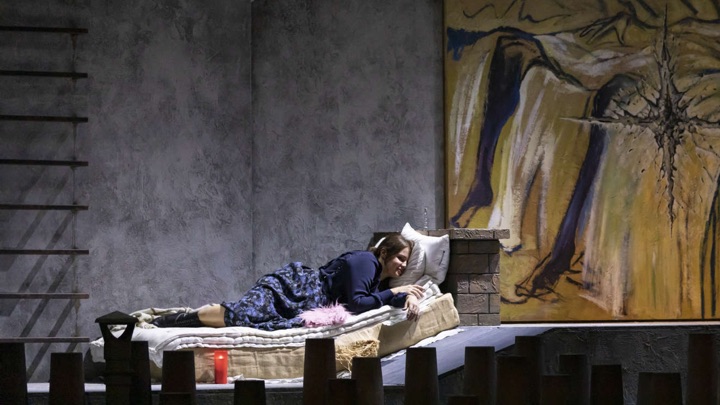 Costello’s light, pretty lyric tenor was gracefully produced and phrased. If he is inclined to rumble in the lowest notes, no one but me minded. His acting, which has never shown much energy, was subdued but amorous, sad rather than heart-rending. If there was tragedy here, it all belonged to Mimì.

Selene Zanetti took that role, and the moon glowing over Vesuvius seemed to be a good omen for her namesake. Zanetti, who is pretty and personable enough, has the lyric style for the part, but there were more than a few hints that she can take on far heavier roles with aplomb. None of its passions or exultations seemed to trouble her—there was well-supported, Italianate ardor. It’s a voice I’d like to hear take on some sizable Verdi heroines.

Dante has dreamed up subtext for the lovers. While they sing their duet, one clown drops a top hat down for Rodolfo and another tosses a gauzy white veil and a bouquet to Mimì. I don’t see it. Marriage is the last thing on any bohemian’s mind—perhaps an artist will wed his muse after fifteen years and a couple of kids. They often did that. But at first sight? That’s not Murger and it’s not Puccini.

The quartet of ne’er-do-wells was filled out by Piero Di Bianco’s ardent Schaunard and Alessandro Spina’s grandiloquent Colline. The latter is evidently a San Carlo favorite; his aria was applauded; but I found his bass serviceable over a hollowness he did not make tragic. Matteo Peirone was unobtrusive as Benoît/Alcindoro.

The orchestra, under Juraj Val?uha, threw itself into the impetuous romance of the score with easy, impeccable delight.

The unit set by Carmine Maringola was a tall, dormered and mansarded house in Paris as the backdrop with many levels of flats and roofs to obscure and embrace it, allowing plenty of activity in Acts I and IV. These all vanished for the middle acts, giving room for a couple of regiments of guards to horse around artistically. The only interval came between III and IV.

One result of this elaboration of skits as backdrop was to push the singers to the stage apron, as appears to be the current international style. When I was a tot, the horseplay hurtled around the stage-size communal room—can’t the guys project from the middle of the stage any more? In any opera house? (Insert your favorite senile diatribe here.)

Clowns and stilt-walkers and humorous monkeys entertained us between I and II—the choreography was by Sandro Maria Campagna, who is also no doubt to be thanked for the pranks and tumbling tricks. There were a lot of extras in Café Momus, all of them conspicuously masked—the chorus sang from the orchestra pit. Costumes—traditional for the named characters, in the surreal “period” for the rest—were by Vanessa Sannino. Cristian Zucaro handled the lights.