The Lehman Trilogy had me in its thrall from the moment the lights went up. It’s absolutely spellbinding. That’s not to say I endorse it wholeheartedly, though. 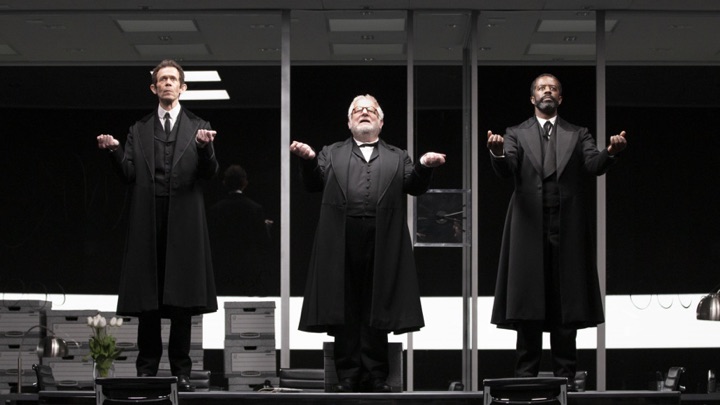 It’s hard to capture the range of emotions I felt attending a Broadway show for the first time in 18 months. At the start of the pandemic, I imagined naively that the pause would be a few weeks at most, and that I’d return for a final whirlwind of pre-Tony Award openings.

Well, we all know now how that worked out.

One of many casualties of the moment was The Lehman Trilogy, whose highly anticipated Broadway run shuttered after a handful of previews but before officially opening. Happily, Lehman proved more durable than many other shows—perhaps even more durable than the gigantic corporate entity whose culture-changing rise and unimaginable fall are the story behind this dazzling but problematic show. It’s on Broadway again, its cast intact from March 2020.

I couldn’t have asked for more from my first experience back. Lehman had me in its thrall from the moment the lights went up. It’s absolutely spellbinding.

That’s not to say I endorse it wholeheartedly, though. It’s far more complicated than that.

And so… I offer two reviews, from different perspectives. I stand fully behind both. 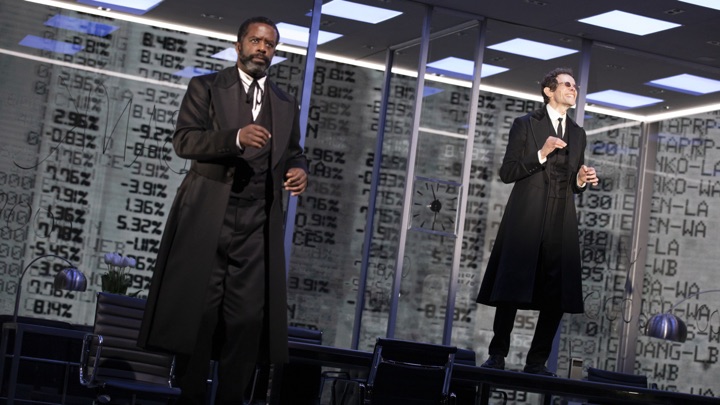 The Lehman Trilogy comes to Broadway by way of London’s National Theatre, and it is the best example yet of a kind of play they have come to specialize in: a sweeping vision of history that simultaneously chronicles past events and considers, often with a critical eye, the continued effects on our contemporary world. The company is famous for their lavish resources, including top-shelf talent across the board, and long, careful preparation and rehearsals. The results exhibit a level of theatrical detail and virtuosity virtually that is unparalleled today.

Specifically, Lehman is a gripping drama (original script by Italian playwright Stefano Massini, adapted in English here by Ben Power) that limns 150 years in the lives of this family of financial titans. It begins in the antebellum South with the arrival of the German Jewish immigrant Lehman brothers—Henry (born Hayum), Emmanuel (Mendel), and Mayer. The story continues through generations to the 2008 collapse of their holding company, which brought international finance nearly to the brink.

The Trilogy of the title could refer to both the three siblings, and to the show’s structure of three acts, each of which is given an individual title. Act I is called Three Brothers; Act II is Fathers & Sons; and Act III is (ironically, of course), The Immortal.

But if “trilogy” is an accurate moniker, it also suggests to me something long and rather formal, which is far from the experience.

Lehman instead plays like a high-octane rollercoaster ride, it’s three-plus hours passing by in a virtual flash. There’s real beauty in the way the show’s energetic forward momentum combines with a poetic lyricism. Much of this is due to the writing, of course. But credit is also due to director Sam Mendes and an astonishing design team (scenery by Es Devlin, video by Luke Halls, lights by Jon Clark) for a lot of it. The action, set against an ever-changing projected landscape, takes place in a revolving glass box that suggests a corporate boardroom, but takes on other identities.

And of course, there’s the cast, who also play multiple roles. Simon Russell Beale and Adam Godley—comically dissimilar physically in a Laurel and Hardy-ish way, share a combination of serious actor emotional depth with a sort of manic vaudeville sensibility. Adrian Lester brings a quieter, more serious “leading man” gravitas to the show. (Lester is a recent addition to the cast, stepping in for Ben Miles, and this casting of a Black actor goes far to underscore the universality.)

At its best, Lehman manages to deliver an immense amount of history at breakneck speed, yet with full clarity. American tropes that we’ve grown up with—immigration and assimilation; New York as a cultural melting pot; a Horatio Alger-ish take on the mythic American Dream—feel new-minted.

Yet as much as Lehman is about history, the even bigger lesson for me was a reminder of the power and imagination of the theater. In some ways, the production is quite minimal. In deeper ones, it’s a celebration of the shared magic of performance.

Live theater is back… and I couldn’t be happier. 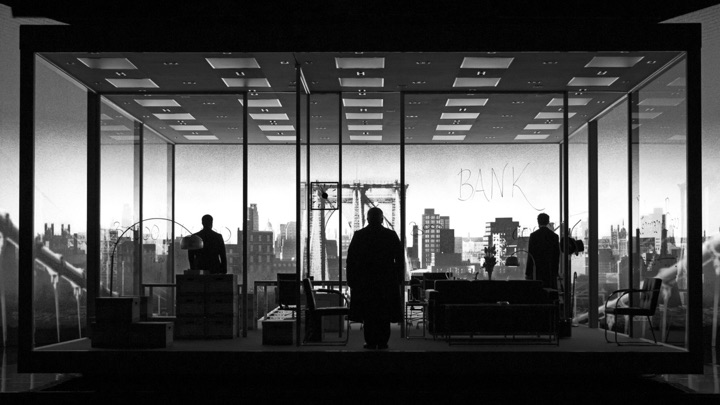 For all of Massini’s brilliant writing, Lehman is compromised by a structure—now tiresomely common in current docu-plays—where the actors, in addition to playing characters, spend most of their time narrating events in direct address to the audience. It’s helpful in delivering lots of facts clearly and quickly, but what the theater does best is conversation, and there’s far too little of that here. Sometimes Lehman feels less like a play than the best podcast ever staged.

The show is, of course, a family story told mostly by that family. But the lack of any other viewpoints is limiting. Female characters appear only tangentially and are further marginalized through some very unfortunate burlesque-style impersonations by Beale and Godley. Where are the voices of others—especially the disenfranchised—who were part of (or victimized by) the Lehmans’ ascent? The glass cube that represents Lehman offices floating glamorously over Manhattan might be a metaphor for the isolated, narrow view of the show itself.

More seriously, I wonder: What is the audience taking away here? Particularly, the final “Immortal” section dwells on the catastrophic downside of economic booms that led us—all of us—to an abyss. But in Mendes’ breathtaking staging—and delivered with brio and charm by three charismatic actors, who moments later will be cheered to the rafters—I noted a dangerous trope we often identify with American heroes of industry: yes, they’re greedy and narcissistic… but damn, the sheer chutzpah is exhilarating!

As theater cautiously comes back to life after two silent years of a nearly unimaginable global tragedy, several Broadway hits—Hamilton, To Kill a Mockingbird—will return with their messages of equality and fairness resonating deeper than ever. The day before I saw Lehman, the world was treated to a Twitter pissing contest between Elon Musk and Jeff Bezos, as the former’s net worth ($227B and rising) pulled significantly ahead of the latter’s (a mere $189B).

Is Lehman really what we need right now?