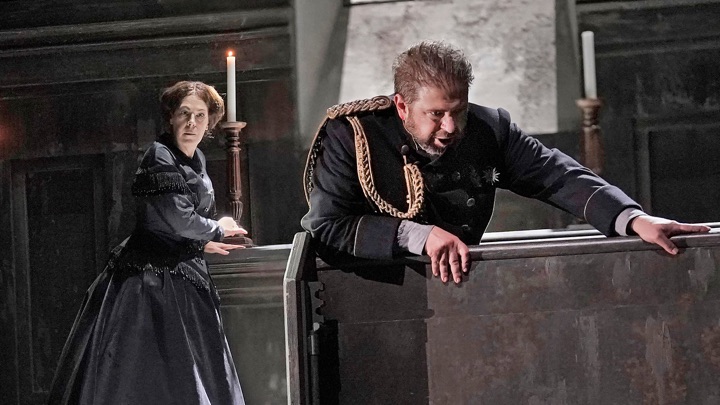 I knew I was in for quite an afternoon when I entered the Lyric Opera House and was greeted by the stunning show curtain, painted by designer Robert Macfarlane, depicting a gloomy chapel surrounded by ruins and fog in shades of black, gray and red.

When the curtain opened, the set is the interior of that chapel, stark walls in grey, filled at first with pews and then reconfigured to suit the many locations of the opera. Macfarlane has created a splendid design that really serves Verdi’s dark and grim tale of murder and desperate ambition.

Macfarlane and director David McVicar have set the piece not in medieval Scotland, but rather at the time Verdi’s Paris revision of Macbeth was published, in the mid-19th century. Moritz Junge’s lavish costumes tend toward military cuts for the men and layers of crinoline under lush, unadorned fabrics for The Lady.

Verdi’s score is among his most highly emotional works, appropriate to the roiling passion of Shakespeare’s characters and story. And in McVicar’s haunting, dark production the work is served by an excellent cast of singing actors leaving it all out on the stage. 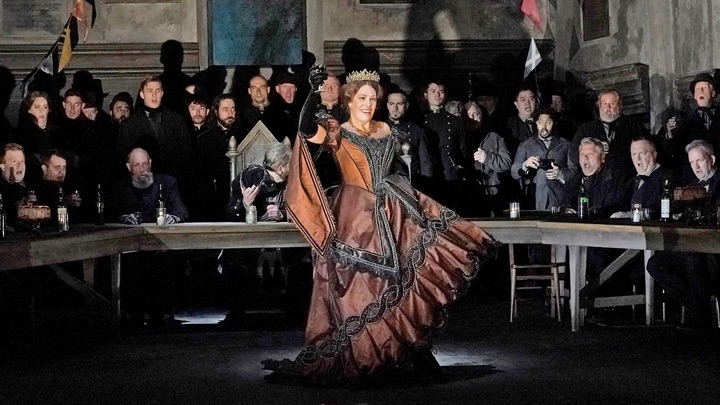 I first have to mention Lyric Opera’s superb chorus under Michael Black. The curtain rises on the chorus witches seated in the chapel’s pews facing the audience. Singing with precision and power, the chorus women inhabit the witches’ jaunty music while performing elaborately choreographed hand movements (choreography by Andrew George). The men’s choristers also throw themselves into choreography and individual characterizations. The Chorus contributes mightily to the tense atmosphere of the opera and provides vital support for the principals.

We are indeed fortunate that Sondra Radvanovsky chose to make her role debut as Lady Macbeth here in Chicago. She is perfectly suited to the role’s demands both vocally and histrionically. On her first entrance, after a subdued reading of Macbeth’s letter to her, she tears into “Vieni t’affretta” like a lioness, with stunningly powerful high notes that are still ringing in my ears.

Hers is a steely, iron-willed, fierce Lady who completely commands the stage. The audience responded with rapturous ovations after her opening scene as well as her thrilling “La luce langue” and a Sleepwalking scene that was the finest of my experience. She sang throughout with a wide variety of vocal dynamics and colors, a simply triumphant performance.

She had excellent support from Christian Van Horn’s Banquo, using his towering presence and vocal suavity to sing a haunting “Come dal ciel precipita” as Banquo’s suspicions and fears about the future come to the fore. Joshua Guerrero was a vocal highlight, especially in his lament for his murdered family in “O la paterna mano”. His bright, clear tenor brought tonal beauty and emotional power to the aria. Matthew Vickers brought a fine tenor to his Lyric debut as Malcolm. 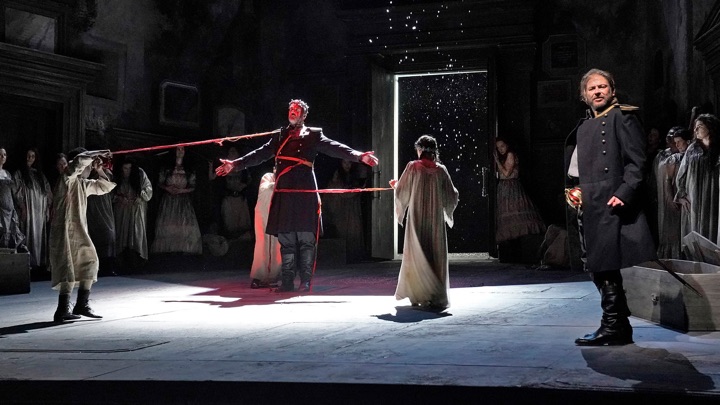 Bass-baritone Carl Colclough in the title role was a bit underpowered. He lacked real tonal beauty or warmth, and played Macbeth as so unhinged from the beginning that it was hard to believe the Thanes would have made him King. He was a committed actor, but it wasn’t until his final act aria “Pieta, rispetto” that he had a vocal success.

McVicar’s production has a few odd moments that to some viewers seemed distracting. I actually thought the three “demon seed” children who appeared as an extension of the witches’ will were interesting and effective, though maybe they appeared a few more times than necessary. I also found the banquet scene a bit strange—all the guests stayed immobile and grim-faced through the scene as if they were forced to be there.

I was very impressed by the precise, driving rhythms in the Lyric Opera Orchestra under Enrique Mazzola. He beautifully captured the contrast between the dark, frightening music and the jaunty, almost toe-tapping melodies of the lighter moments.