The sonic clash never resolves itself

The cabaret at Saint Ann’s Warehouse delivered frothy fun and a dollop of pathos with Anthony Roth Costanzo and Justin Vivian Bond in Only an Octave Apart. 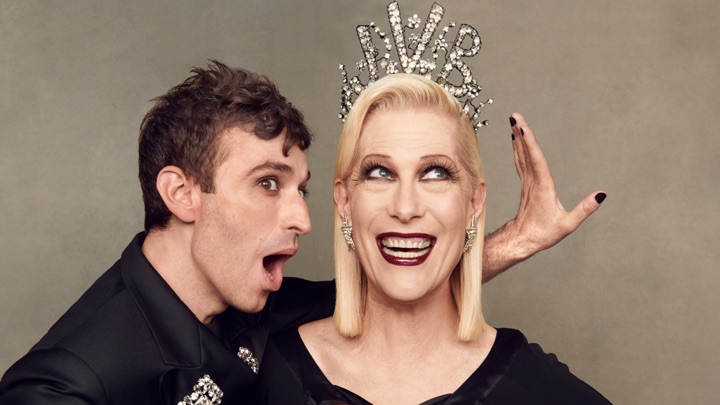 They’re an odd couple, Bond and Costanzo, with voices nearly exactly opposite; Bond’s is all gravel and rough edges, flawed and human beneath the carefully deployed expressiveness of the delivery. Costanzo soars somewhere in the stratosphere with that celestial tone and mind-melting pianissimo.

Costanzo, who managed to look serene and dignified in a pair of see-through mesh bell-bottoms over teeny black shorts, was able to totally nerd out, singing personal favorites that ranged beyond the greatest hits. The operatic moments were mostly played straight, a mini-recital filtered through a more traditional cabaret sensibility, while still retaining the campy sincerity that makes opera great (and makes opera and cabaret such a good match).

A number from Purcell’s I had Costanzo languishing in the moonlight and trilling lasciviously, while a breathtaking rendition of Liszt’s “Über Alles gipfeln ist Ruh” brought pianissimo so limpid and hushed that it felt like it was emanating to us through telepathy.

None of this fabulousness was particularly surprising; Costanzo knows where his bread is buttered, and he excels at the ‘less-is-more,’ magnetic-stillness game. The true delight of the evening though was getting to watch him let loose, particularly in the hilarious Singin’ in the Rain inspired bit where each singer turned into ventriloquist dummy for the other.

Listening to Bond scream “Butch it up!” at Costanzo, who at this point was dressed as some kind of 1940s movie star/pirate slattern (this might have been a reference that eluded me: commenters, if you were there can you help me out?), after Bond hysterically mouthed the “Habanera” wearing a matching outfit was the highlight for me. Here each artist brought out the best and funniest in each other, their chemistry clicking in all the right ways. Also hilarious: Costanzo singing a tenor and soprano duet with himself, flinging himself behind a curtain to transform into each character before collapsing to the ground in exhaustion. 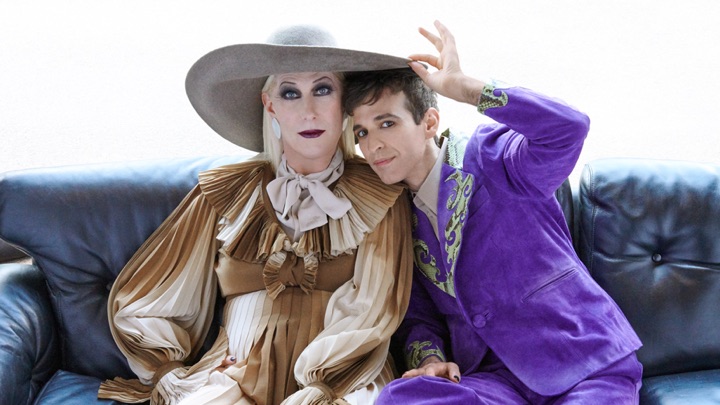 Bond’s solo numbers ranged from funny to uplifting to heartbreaking, showing an artist in total command of themselves (don’t let the jokes fool you; when it’s time to sing, Bond is completely clear-headed) and their audience.

Bond opened their solo set with possibly the campiest song of all time, “There are Fairies at the Bottom of our Garden” tossing flowers with deliberate, knowing timing, a perfect match for the serious-camp of the Purcell. Bond poured on the drama with “I’m Always Chasing Rainbows,” and even sang some disco, Sylvester’s “Stars” with Costanzo providing backup vocals in complementary sequin gowns.

“Stars” was perhaps the most bonkers of all the choices last night, with echo on the mics, blinding sequins, and amusingly mismatched dancing (Bond swaying and slinky, Costanzo rooted and serious), and might have been improved greatly by a) a dance floor and b) drugs.

In between numbers, Bond cracked jokes, sharpening their signature wit, while Costanzo acted as a not-so-straight man, all wide-eyed sincerity as he tried not to laugh too hard and to keep the interstitial dialogue moving. My only true critique is that I wished those jokes had been tighter, or had leaned into the oddness of their pairing more strongly in the way that the songs did so well.

While the musical numbers were polished to a sheen, a nervous energy seeped into the dialogue, and felt rushed at moments. This is a small qualm, however, in an otherwise delightful evening and can largely be chalked up to the fact that no one knows how to interact after a year trapped inside.

As the evening progressed, I found their pairing increasingly compelling. The sonic clash never resolves itself- in fact, I found it got even more disparate, particularly in their rendition of the Kate Bush and Peter Gabriel duet “Don’t Give Up,” where Bond’s earthiness was particular contrasted with Costanzo’s ethereality.

But that contrast did grow on me, however, as the show progressed. The pair balanced each other, bringing new shading out in each other’s voices; The grain and humanity of Bond’s voice draws attention to the subtler colors in Costanzo’s, while the smoothness of Costanzo’s cushions and lifts up Bond, allowing their skill as an interpreter to pull us into their world.

The final number, a mash-up of the Bangles’ “Walk Like an Egyptian” with Akhnaten’s “Sun Aria” (complete with the Glass-ian laugh-trills and stop-sign hand: “Stop in the name of Aten”), made me absolutely lose it. While I’m not sure how many people in the audience knew Akhnaten, the four people who definitely did know it cackled loudly.

It was pure dumb perfection: totally obvious and yet unexpected. The whole show is low-hanging fruit, perhaps, but it takes a lot of smarts to know which low-hanging fruit is ripe enough to eat.