This is an exuberant, uplifting, and joyous Elisir, and, for once, it was actually laugh-out-loud funny. 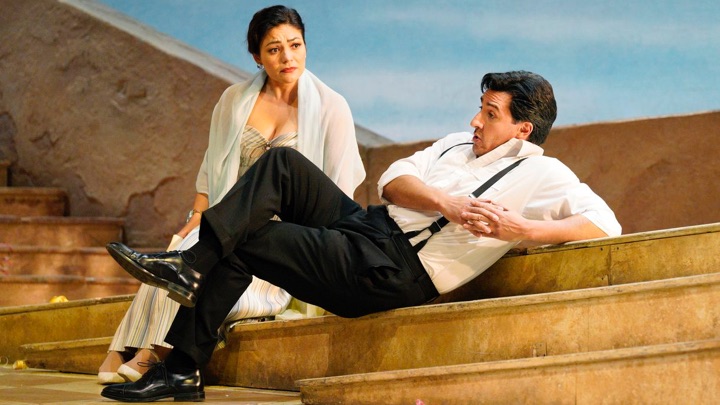 On Saturday afternoon, I attended my first public event since the beginning of the pandemic: Lyric Opera of Chicago’s “new to Chicago” production of L’elisir d’amore. A bit nervous about being in a crowd again, I was immediately reassured by Lyric’s stringent pandemic requirements. All patrons had to have photo ID and proof of vaccination (a negative Covid test was not accepted) and all had to wear masks at all times in the Opera House. The audience seemed gladly to accept these rules.

I was very glad I attended. This is an exuberant, uplifting, and joyous Elisir, and, for once, it was actually laugh-out-loud funny. The sets and costumes by designer Robert Innes Hopkins are lavish and absolutely beautiful. The opening tableau is of a gorgeous, sun swept hotel plaza/café with a background of blue sky and swaying palm trees. Lighting (revival design by Sara Riffle) is bright, colorful and plays well with the set and costumes.

This production moves the action out of its 19th century rustic roots to 1950’s Italy, the era of La Dolce Vita, that director Daniel Slater thinks conveys a certain innocence that marks the naiveté of the characters. The idea is meticulously crafted into a creative, nuanced whole. Slater’s direction is superb throughout, crafting beautiful comic moments and business contrasted with sentimentality. The choreography of Tim Claydon is an absolute delight, perfectly suited to the production’s high spirits, especially in the large ensemble scenes.

Of course, this is the classic lower-class guy loves upper class girl, girl is indifferent, guy persists through numerous high jinks, and guy gets girl in the joyful ending. Fortunately, director Slater is blessed by a superb principal cast and an absolutely game Lyric Opera Chorus under Michael Black. Soprano Ailyn Pérez sang with power as well as delicacy, and found every nuance in Adina. She floated high notes with ease, and deployed her honeyed soprano in many different colors. 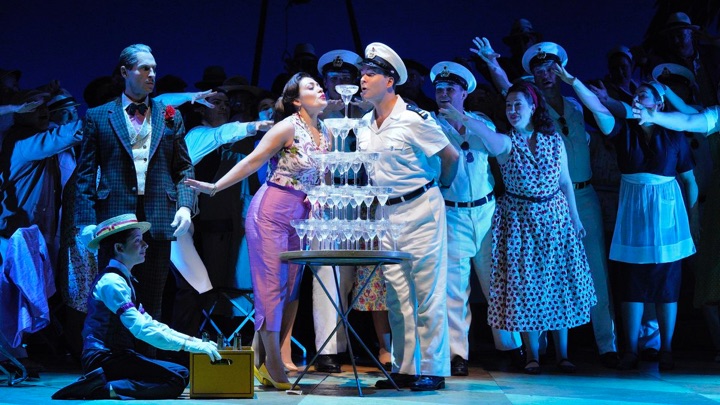 I cannot imagine a better Nemorino than Charles Castronovo (in the context of this production). The 1950’s setting seemed to me to add a layer of sophistication to the proceedings, and Castronovo’s Nemorino, if somewhat childlike and naïve, was certainly no rustic bumpkin.

He sang magnificently throughout (“Una furtiva lagrima” received a huge and well-deserved ovation) and added to it was the fact that he is a splendid physical comedian. This is a skilled comic actor as well as an excellent tenor. The one difficult thing is that Mr. Castronovo is such a striking and handsome figure on stage that one wonders why Adina hasn’t already fallen for him! He also showed fine chemistry between himself and Ms. Perez.

We had excellent support from baritone Joshua Hopkins as a strutting, arrogant Belcuore, very well sung and also displaying excellent comic timing and physicality. Bass-baritone Kyle Ketelson sang and acted with great aplomb as the charlatan Dr. Dulcamara, entering in the basket of a huge hot-air balloon (a great effect) and singing his wiles with charm as he fools the naïve villagers and the lovesick Nemorino. Denis Velez was a sympathetic Giannetta.

And that brings me to the huge Lyric Opera Chorus, singing with superb diction and style and throwing themselves into charming choreography throughout. I can’t remember this chorus so enthusiastic and so making a great contribution to the afternoon’s high- spirited adventures.

My one caveat, a minor one, came with two clunky, overly long scene changes, one in each act. They were just long enough to interrupt the flow of the story and score. And, both times, when the curtain went up again, it didn’t seem that all that much had changed.

This reviewer is not usually a fan of comic operas, finding that they frequently run out of humor in the final hour. But here, the fun went from beginning to end without ever drooping. Even the subtitles by Opera North were witty, clever and downright funny.