Call me Mary Quite Contrary if you want, but as we finally see live performances coming back, I’m reflecting with gratitude and even some nostalgia on the way COVID quarantine forged a path for entrepreneurial performance companies to recalibrate and deliver their work through streaming platforms. 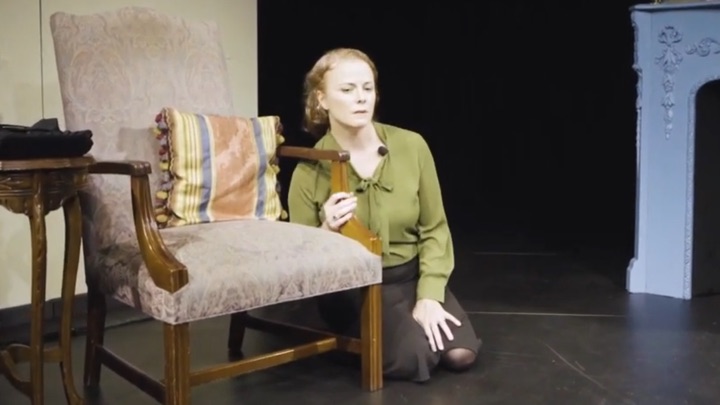 Philadelphia theaters in particular have benefitted from this innovation. While a few of our local companies—the Wilma in particular—have garnered notice in the all-important New York Times, many more are greatly admired here but not well known beyond the local area.

Irish Heritage Theatre for me is one of those little jewels that most deserves recognition. They’ve successfully tackled canonical works by O’Casey and others, but they are especially strong on the more recent generation of Irish works that simultaneously build on the core traditions, and detonate them from within. Two years ago, a production of Marina Carr’s odd but fascinating Woman and Scarecrow was simply dazzling. That show was directed by Peggy Mecham (IHT’s Artistic Director) and featured actress Kirsten Quinn, a company veteran who has memorably illuminated a number of their best projects.

Both artists are, virtually speaking, back now with Dermot Bolger’s The Holy Ground, another intriguing, elliptical work that is available for streaming for an exceptionally modest donation of $15. The show can be found through September 26th at Broadway on Demand; for more information and to get access, go to www.irishheritagetheatre.org.

It will grab you from the first image, a ghostly pan shot of the company’s home theater (Philadelphia’s tiny but legendary Plays & Players on Delancey Street), taking the viewer through an aisle of empty seats and onto a stage where a drab but comfortable suburban Dublin home is effectively suggested with the most minimal means. (Film direction is by Tony Kruth; Carlos Ortiz did the set and props.)

It’s an intimate setting for what at least initially appears to be a study in smallness. The Holy Ground’s single character, Monica O’Muirthile (Quinn) has returned from a funeral of her husband, Miles. Slowly she settles in, removes her gloves, and begins to describe her experience. Some aspects are straightforward. But as Monica begins to thumb through various photo albums and scrapbooks (one quite pointedly nearly empty), it becomes clear that there is far more here than initially meets the eye. To some, Monica was an outcast—virtually invisible. But the woman we see is clearly roiling with emotions. 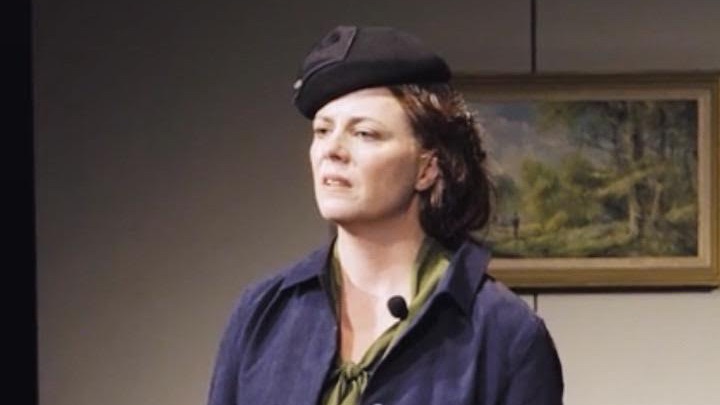 I’m reluctant to say much more about the story. The Holy Ground is short (under an hour) and best experienced through surprise. I will say that while Bolger’s story begins with a familiar trope in Irish drama—the grieving widow—it goes in many different directions, taking on issues including particularly politics and the church with slyness and dark humor. There’s considerable poetry in the writing, including the title which could refer to both the interment, and more broadly to Ireland itself.

The Holy Ground lives in a realm that superficially suggest realism, but I think is meant to be less concrete than that. To whom, for example, is Monica speaking? The memory of her husband? Herself? Is she even actually “speaking” at all—or are we her unseen audience and conscience, eavesdropping on a stream of consciousness internal process?

In other words, this is a difficult, complicated piece. Quinn, a superb actor by any measure, is especially effective here at suggesting the play’s many ambiguities, while also pulling us into what is deeply real regret, anger, pain, and even some unexpected pleasure. If Bolger’s tonal shifts and imagistic writing are a challenge for an actor, they are also an emotional workout for an audience. 50 minutes feels simultaneously very short, and like all we can take.

But it’s an hour you won’t forget, and one that showcases not only Quinn, but the artistic vision of this exceptional company. Now and then an awkward camera angle reveals the constraints they must have been under, but IHT is used to making a great deal from slim resources (which, come to think of it, strikes me as a particularly Irish trait).

I hope this video is a route to greater visibility for the company and its artists. Even more, I wish that when they come back to Plays & Players in real life, the audiences who discover them through Holy Ground will see them in their natural habitat. (Good as Quinn and Mecham are here, they’re even more impressive on the stage.)

In fact, how about if some New York theater goers come to Philly for change? We Philadelphians used to going there… but I-95 runs in both directions, after all.