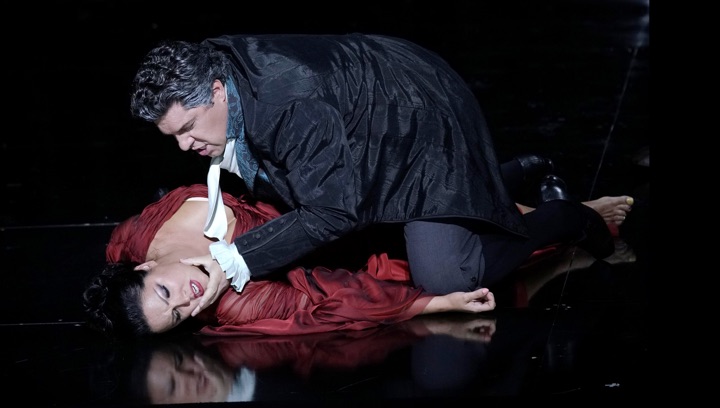 Teatro Real at Madrid was the first major opera house in the world to resume opera performances last year. Since then they have managed to run almost a full season: from 13 planned productions they brought to the stage 12 of them and canceled only one and the main reason for that cancellation was Brexit related travel restrictions and red tape for a production imported from the Royal Opera House).

They have been setting the path for others in terms of safety protocols and gradually opening up: from the last year socially distanced semi-staged Traviata to the Tosca that closed this season with a full chorus on the stage.

Expectation to see Netrebko in Madrid was extraordinary as she hadn’t sang in an opera at Teatro Real since 20 years when the Mariinsky Theater (still named Kirov at that time) visited Madrid with a War and Peace production conducted by Valery Gergiev and she was not yet the world top diva she is nowadays. Something similar happened with Jonas Kaufmann, who only sang at Teatro Real in 1999, again when he was not a world famed tenor.

The Paco Azorín production of Tosca premiered six years ago at Teatro Maestranza in Seville and since then it has been seen also at El Liceu in Barcelona but it was new to Madrid. It is a straightforward setting of the action with a symbolic layer of top of it: the revolution is what moves history forward but also this story.

A naked woman symbolizes this revolution (emphasized with projected quotes from the French Revolution) and facilitates the development of the action: she is the one giving Angelotti the chapel key (hiding from oppression), handling Tosca with the knife (fighting the oppression) and finally showing Tosca the path for jumping from the castle (the price you pay for the revolution.)

It was also interesting how the three acts were linked: the second act starts still showing the church that revolves to become the Palazzo Farnese and in the third act starts with this set going under the stage and the prison coming from the back as a rotated version of the church/palace. The dark sets were imposing and created strong visuals in the Te Deum and during the second act when the big red curtains drop and reveal cells with other prisoners and the torture itself.

This performance lacked some of the in-depth Personenregie that we could see in the first cast live streaming on the July 10 with the trio Radvanovsky-Calleja-Álvarez. Netrebko’s Tosca didn’t help herself to wine to Scarpia while asking for the safe passage. After “Vissi d’arte” Netrebko had trouble getting into position for the “Vedi, singhiozza le man giunte” and in the final scene did not fall backwards (as Radvanovsky did) but rather did a more standard dive off the parapet.

From the acting point of view everything seemed a little bit under-rehearsed compared to the other cast. However this was compensated by Netrebko’s charisma and the excellent chemistry with both Eyvazov and Salsi (with whom she has shared the stage a number of times before.)

Nicola Luisotti conducted the Orquesta del Teatro Real in a powerful way showing the muscle of the full orchestra achieving a powerful volume. This could have hurt some singers but not these ones: they managed to project their voices through the theater without any trouble. Luisotti also opted for slow tempi in general and very slow ones in particular in the two main arias of the opera.

Luca Salsi sang a Scarpia created from the meaningful phrasing more than from then emphasizing the vocal authority. He was scary and evil because everyone listening to him believed was he was singing. His line of singing was elegant , yet when he leaped on Tosca he truly looked like a demon.

Yusif Eyvazov was at his best singing Cavaradossi. The role allows him to shine with a firm, well projected voice during the whole opera. In the first act he showed many different nuances while interacting with Angelotti and later with Tosca. In the second act his singing was urgent and passionate and in the third act he composed a moving “E lucevan le stelle” full scene with a extraordinary legato singing and an admirable breathing required by the slowness of the tempi.

Finally, Netrebko was a canonical Tosca, but at the same time she was her Tosca. Her voice was ideally suited for the role without showing any single weak point. Her bright rich beautiful tone filled the auditorium in an apparently effortless way. Again, she managed the slow tempi in the duets and her main aria with remarkable authority. She didn’t give into the temptation of overacting or using artificially darkened voice for her shouts or semi spoken lines like the “Assasino!” to Scarpia or “Mario, morto” at the ending, but those sounded extremely credible.

After the many nights full of encores on the other casts (even a historical double encore by Radvanovsky and Kaufmann) maybe Madrid audience was expecting something for these final performances. But after the first Netrebko-Eyvazov-Salsi night it was clear that “La Netrebko” does not do encores, so during this final performance everyone forgot about the game of doing an over applause and shouting “bis” and everyone focused on doing it and enjoying it a single time. But what a time it was!