I’ve enjoyed these streamed recitals, warts and all, and always appreciate the chance to watch performers let their hair down, so to speak. 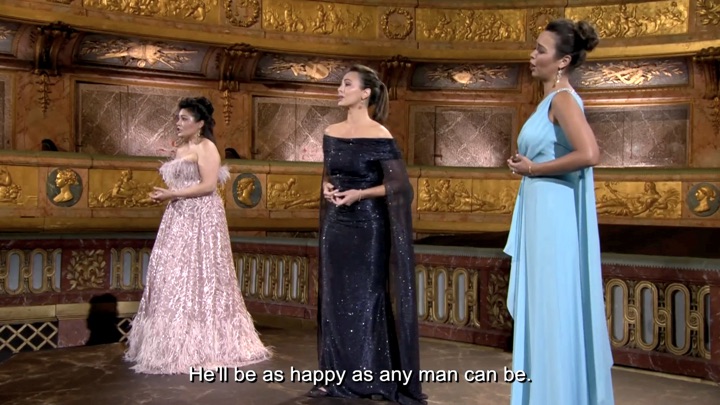 Cameron Kelsall: The Metropolitan Opera season, such as it was, concluded not on the stage at Lincoln Center but in the gilded jewel box of the Versailles Royal Opera, where Isabel Leonard, Ailyn Perez and Nadine Sierra offered a recital under the cheeky banner of “the Three Divas.” The Met has been offering these concerts since last July—usually from luxe European locales, and usually featuring the day’s top singers accompanied by piano—as a stop-gap during the coronavirus pandemic, but general manager Peter Gelb optimistically proclaimed this “likely the last of the series.” Although the prospect of live performance in the opera house this fall remains an open question due to ongoing labor disputes, there’s little doubt that rising vaccination rates and falling Covid cases spell an imminent return to the opera house. Glory be! That said, I’ve enjoyed these streamed recitals, warts and all, and always appreciate the chance to watch performers let their hair down, so to speak. This final concert captured many of the positive and negative aspects of the series, wouldn’t you say, David?

David Fox: I agree—positives and negatives both. In the current spirit of future optimism, let’s start with the positives. All three of these singers have superior vocal gifts, and are also—even by today’s current standards for good-looking opera stars—exceptional stage glamour. Among the group, Sierra and Leonard in particular sounded in peak form, with Leonard’s mezzo having a gorgeous caramel color that gave the voice more character and grounding than I’ve heard previously. Sierra too has an unusually warm timbre for someone who began as a lyric, and here even the repertoire that stretched her—Donna Anna’s “Non mi dir,” for example—was within her vocal means. I’m less convinced by Perez’s transition to heavier repertoire: her singing was a mix of lovely moments and awkward ones. But even though none of these three singers match the marquee names like Anna Netrebko and Joyce DiDonato that we’ve had before in this series, it’s a lucky company that has them on the roster. I wish I had equally positive feelings about the actual music-making here, but that I found often frustrating.

CK: All three singers spoke warmly about their shared Latinx heritage and a desire to bring the music of these cultures to the fore, a worthy endeavor that deserves praise. Leonard has often made Spanish-language music a focus of her recitals in the past, and some of that was on display here, although it took up a fairly paltry amount of the program’s recital space. The 90-minute concert was devoted largely to standard repertoire and, in several cases, arias from operas with which the artists are associated. Do we really need to hear “Voi che sapete” again, even though Leonard still carries it off well? The opening notes instantly transported me from the opulent Gallic hall to the vocal auditions for a regional American conservatory. And although Sierra has emerged as an in-demand Juliette, her “Je veux vivre” lacked joie de vivre…to say nothing of a steady trill.

DF: Before I even get into individual repertoire, I’m now going to be the skunk at the garden party. With all the considerable talents on display, I found virtually none of the individual pieces fulfilling musically. There were many factors at play here, but among them: far too many slow tempos to begin with, further hampered by what seemed to be a Rubato Festival. All three singers took ample opportunity to slow things down further; to separate phrases into their component parts; and to snatch breaths in awkward places, losing any sense of forward momentum. In a piece like Juliette’s “Je veux vivre,” which was Sierra’s generally very well vocalized opening selection, the net effect was crippling. Add to all this a general lack of stylistic specificity. This program included—just as a sampling—19th Century French music, Mozart, Baroque, Verismo and more; yet too much of it sounded alike.

CK: I agree, and this was most evident in the pieces where an adherence to a certain style really counts. I noticed it especially in “Hab mir’s gelobt,” which seemed like an odd choice from the outset, and was given with virtually no consideration to the actual context of the piece or what the words mean. This became even more clear when this number was repeated over the closing credits: Without the visual context, it sounded even more pallid. I felt similarly about Perez and Sierra in “Mira o Norma”: While I appreciated the increasingly rare dual-soprano pairing, the actual interpretation seemed somewhat timid and slapdash.

DF: At another end of the stylistic spectrum, Leonard vocalized Vivaldi’s “Agitata da due venti” skillfully, but the thrillingly tempestuous ride that the title suggests—and singers including Cecilia Bartoli and Simone Kermes provide—was largely missing. For me, it says a lot that the most completely satisfying performance on the program was the Contes d’Hoffmann “Belle Nuit,” where a lolling gentle tempo worked (and Sierra and Leonard’s mid-voices are at their loveliest). Perez was most effective in Nedda’s “Stridono lassu”—elsewhere, the covered tone and vagaries of pitch suggested too much too soon in terms of heavier rep. I also agree that word painting was generally not the order of the day. For me, a recital calls for maximum interpretation through the text, and minimal physicalization. This concert was at the opposite end of the spectrum.

CK: I think Leonard’s Seguidilla is the ultimate example of that for me. Vocally, it suited her extremely well, but she couldn’t resist leaning into every hoary stereotype of Carmen’s physicality, and she didn’t seem to connect much with the text. I know Carmen is a role in preparation for her, and she clearly has the vocal goods, but it would do her well to aim for a more individual interpretation.

DF: Carmen in particular for me is a less-is-more role: Bizet’s magnificent score, so utterly attuned to the many shades of her character, does so much of the acting that a smart interpreter will focus inwardly. I hope that’s what Leonard will do when she takes it to the stage, but it wasn’t the case here. She made the good point in introducing it that this is, of course, more France than Spain. In the actual Spanish rep that closed the program, I very much liked Sierra’s saucy turn in a delicious excerpt from Gimenez’s El Barbero de Sevilla. But despite the estimable artistry of guest guitarist Pablo Sainz-Villegas, special arrangements of “Cielito lindo” and “Besame mucho” sounded overly fussy and without rhythmic alacrity.

CK: Indeed, neither of those well-known tunes resonated much for me, though I’ll add in a bit of praise for Leonard’s solo stand in Rossini’s Canzonetta spagnuola. It’s worth noting, too, that “Cielito lindo” came across as a much more natural fit here than when Roberto Alagna crooned it at his recital last year. As I mentioned earlier, though, one of the benefits of this series is the opportunity to hear music that probably won’t reach the Met stage.

DF: Ah, yes—the Met stage. Less than two months ago, that seemed as unlikely an actual destination as Wagner’s Valhalla… and yet, at least in terms of public health issues, it now looks far more possible. If this truly does turn out to be the final concert of this series, I want to give a shout out to Christine Goerke, a marvelous host throughout the season, whose charm and ease on camera were so very welcome… and so in contrast with Peter Gelb’s awkwardness. And frankly—Gelb’s promise of a Fall return also needs some serious reality-checking. As I write this, there are several very serious roadblocks before that can happen. I wonder what our readers here think—what are the odds?