If you missed Amour during its Broadway premiere 19 years ago, you’re not alone. 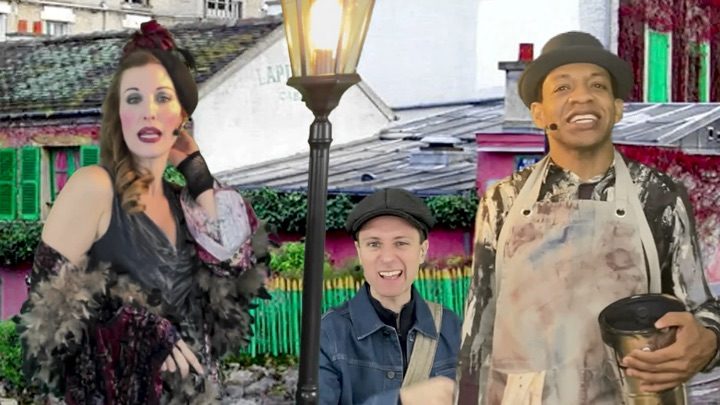 The chamber musical about a timid civil servant in post-war Paris who discovers he can walk through walls closed after just seventeen performances at the Music Box Theatre, despite warm reviews. The show has had a longer afterlife, though, due in large part to a cast recording that preserves Michel Legrand’s charming score.

I happened to catch one of those few performances and was instantly won over. The show’s winning allure comes through again in a new streaming production that draws from a deep bench of Broadway talent. Offered through Stellar, a platform designed for live performances, it appears for an even briefer run—three showings only, through Sunday—and shouldn’t be missed.

Legrand’s particular talents suit the whimsical story. The Oscar-winning film composer, who died in 2019 at 86, favored light, hummable tunes over complex melodies, and the score has an ethereal quality that warms the heart and lingers in the ear. Though not quite pastiche, the music evokes Montmartre in 1950, a place the composer himself knew well. The simple songs are sweet and memorable; some develop character, some move the action forward, and almost none are as cloying as some of Legrand’s more saccharine work can be.

I recall thinking, when the original production rapidly opened and closed, that it was the sort of musical that would have been at home when commercial Off-Broadway still flourished. Even a small house like the Music Box swallowed it up somewhat. In a sense, the current assumption—directed by Meg Fofonoff for her company Art Lab, in collaboration with ShowTown Productions—fulfills that destiny by finding a sense of intimacy that the material really needs.

It does fall into some of the traps that have come to define streaming theater. While some of the backdrops used are appropriately imaginative, others resemble screensavers. Occasionally, there isn’t perfect unity between the singers and their backing tracks. But overall, the production itself is thoroughly watchable, and it’s heartening to see such finely tuned ensemble work from a cast that filmed their parts remotely.

Drew Gehling brings a sweet everyman quality to Dusoleil, the “passepartout” at the musical’s center. He’s wickedly funny when he uses his powers for mischief, as when he torments his brutal boss, but he also taps into the character’s strong moral reserve. There’s a gentle chemistry between Gehling and Christiani Pitts as Isabelle, his object of desire, a guileless convent girl married to a controlling prosecutor (Adam Pascal, who’s aging nicely into character roles).

Pitts lacks the effortless soprano one might expect in her role, but she conveys Isabelle’s disillusionment and hunger for a life beyond the gilded cage her husband locks her in. Her performance of “Somebody,” a longing ballad of escape, is the musical’s high point.

Kara Lindsay, Kevin Massey, Jennifer Sánchez, Thom Sesma and Derrick Baskin deliver quirky supporting turns. Vishal Vaidya is especially affecting as a disgraced doctor who turns to drink after being accused of Nazi sympathy—he takes a part that could easily fall into caricature and turns it into something deep and haunting.

The ensemble’s MVP, though, is Rachel York as a world-weary streetwalker, complete with a feathery French accent and looking glamorous in costumes by Jennifer Tremblay. After memorable turns in Gentlemen Prefer Blondes at City Center Encores and the recent national tour of Anything Goes, she continues to show why she’s one of the most valuable performers in contemporary musical theater.

I’d be lying if I said I’ve been convinced over the past year-plus that digital theater can ever replace the real thing. But as the shutdown continues and producers become more attuned to best practices within the medium, they are able to provide more satisfying facsimiles. A bagatelle at heart, Amour offers a much needed hour-and-a-half of escapist entertainment. Don’t make the mistake of missing it this time around.