HERE’s new radio opera marks itself out by leaning into the dramatic affordances of the audio-only format in No One is Forgotten, an adaptation of a play by Winter Miller with new music by Paola Prestini and Sxip Shirey. 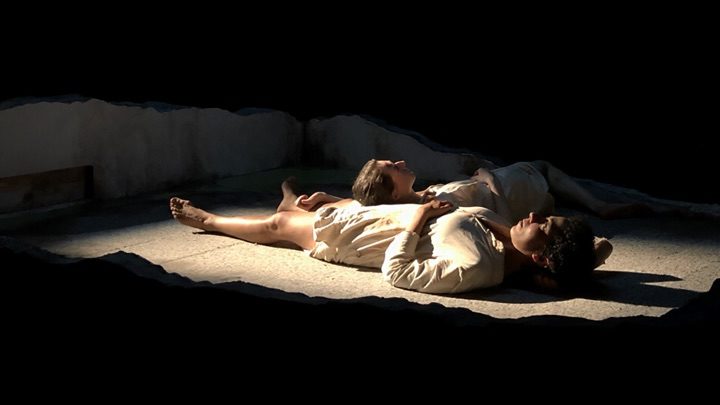 Radio opera is not a new thing; a little less than a century ago, composers like Gian Carlo Menotti were experimenting with the format, resulting in works like The Old Maid and the Thief. Though the format peaked in the 1930s, the genre has continued throughout the twentieth century and into this one.

HERE’s new production, however, marks itself out by leaning into the dramatic affordances of the audio-only format in No One is Forgotten, an adaptation of a play by Winter Miller with new music by Paola Prestini and Sxip Shirey. The opera follows two journalists, held in captivity by an unspecified force for an indefinite duration, recording their conversations as they seek to occupy their minds and persevere in their squalid circumstances, which involve days and months spent in complete darkness.

What I watched was only the first part of three, in an ongoing release that began last week and will last into late April, with the recording available online for audiences, so my review here will necessarily be a bit cursory, since I don’t want to judge prematurely either way; I’ll follow up when all three parts are out.

I’ll start with the good; Winter’s libretto is affecting and stylish, deploying the women’s quotidian conversations with wit and skill to explore larger themes about human survival and the place of journalists in the modern world, without veering into either melodrama or monotony.

Kathleen Chalfant and Amelia Workman, who voice the journalists when speaking, Beng and Lali, bring subtlety and plenty of good humor to their roles, differentiating them nicely and portraying the curious sort of friendship and intense intimacy that can only come from spending every moment together. Eve Gigliotti and Andrea Jones-Sojola, who voice Beng and Lali when singing, brought a much-appreciated warmth and richness to Prestini’s spare cello score.

A few questions remained, however, that I am very hopeful will become clearer in the next two installments. The choice to cast two voice actors and two singers, while sensible giving the quantity of spoken dialogue, had a somewhat confusing effect, since it became much more difficult to keep track of who was singing at any given moment.

The singers did not sound very much like their spoken counterparts, and this made the move from dialogue to music somewhat jarring. The program cited this choice as resulting from a desire to contrast the real world of the spoken dialect with the fantasy world into which the characters escaped through music. To me, it had the opposite of the intended effect; making the singing less compelling, less immediate than the speaking.

Prestini’s score had moments of breakthrough beauty and this was well-sung all around, but in the naturalistic world created by the libretto, I wanted there to be either way more music or none at all, a problem which I imagine will be solved with the subsequent installments. In other words, for an opera, there really wasn’t too much singing going on; that hardly matters when the dialogue is this good, but it’s something to be aware of for listeners who want to check No One is Forgotten out.

Despite these issues, I enjoyed No One is Forgotten, not only for itself, but for how it suggests a new path in the Zoom-opera landscape, one that ultimately returns to an underutilized format that works very well for current times. It uses the format well, and ended on enough of a cliff-hanger that I am excited to see where it’s going to go next.