Now, through the auspices of the Metropolitan Opera, we have Sonya Yoncheva—and if anything, the diva-dom has been kicked up a notch! 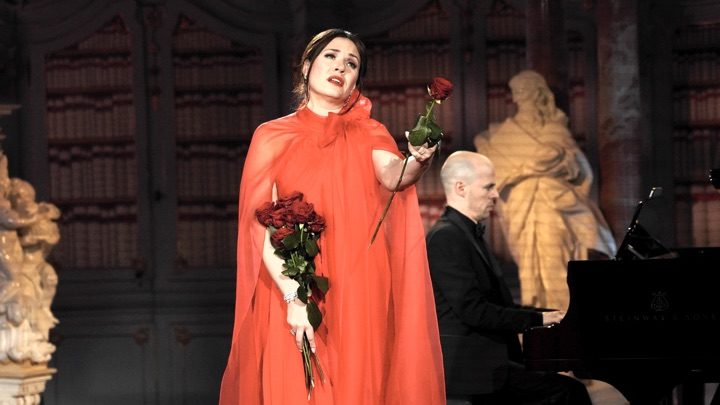 David Fox: Another day, another diva. Cameron, I’m sure you remember that our last listening party—exactly a week ago—featured Angela Gheorghiu, brought to us in the comfort of our living rooms through the agency of the Metropolitan Orchestra. We greatly enjoyed her singing, but were even more enthralled by her signature admixture of grandeur and coquettishness. Now, through the auspices of the Metropolitan Opera, we have Sonya Yoncheva—and if anything, the diva-dom has been kicked up a notch! I’m not intending to diminish in any sense her sincerity, vocal allure, and distinctive musicality, all of which was at least intermittently on display, and which we’ll discuss. But honestly, if I were looking for a way to illustrate the wonderfully capricious world of opera divas, I could hardly do better than the first few minutes here. Can you think of a weirder misfit of aria—Aida’s “Ritorna vincitor!”—and circumstances than these?: A jewel-box German Baroque library, all ornamental white-and-gold squiggles… an accompanying piano (this really needs the bombast of an orchestra)… and a sweeping entrance by a bejeweled and très formidable soprano, wearing acres of red voile and a bow, and looking like a very expensive Christmas gift from La Perla. For me, this was worth the price of admission—and we hadn’t heard a note from her yet!

Cameron Kelsall: The surrounding environs have often stolen the show in these transmitted recitals, and this was no exception: the Schussenried Cloister provided an ideal backdrop for Yoncheva’s stately and varied program. And she did make her entrance as if she were gliding off the pages of a glossy Rolex advertisement. But she is also a thoughtful artist, as her choices showed—Purcell and Handel selections took their place next to Puccini and Verdi, and the selections encompassed four languages. Often, though, I came away admiring the innate theatricality of Yoncheva’s self-presentation, and her willingness to really go there, more than the singing itself.

DF: A fascinating mix of material, to be sure—and I give her props not only for seriousness but for imagination. As you point out, the Baroque arias were next to Puccini and Verdi—literally, in this case. So often, opera singers use this material as throat-clearing openers for a recital. That Yoncheva placed them in the central part of the program spoke to her inherent love and respect for them—which also shone through in her generous, emotional delivery. To your bigger point—I find her a fascinating but frustrating singer. Every piece on the program had at least a few moments of breathtaking beauty and artistry. But virtually none of them were flawless. Loose vibrato here; pitch problems there; issues with the top register and dynamics. And while the program was by definition Fach-less, she’s audibly more comfortable in central lyric repertoire—and largely staying in the middle both in range and volume—than at the extremes.

CK: We should note that Yoncheva seemed to be suffering from either allergies or a cold—she could be heard audibly coughing at several points throughout the ninety-minute concert, and she often took sips from a discreetly placed water bottle between arias. She deserves praise for persevering, especially since this recital had already been postponed once, from November, due to a case of bronchitis. (Thankfully not COVID—this is one of the few times, I’d imagine, when a garden-variety upper respiratory infection is cause for celebration!) Yoncheva sang an arresting, darkly coloristic Song to the Moon at last year’s Met At Home Gala, and once again, and it was this afternoon’s highlight too. It must be said, though, that she indulged in some hoary recital acting. When the singing is this good, you don’t literally need to point at the moon to get the gist across.

DF: Especially when, as here, the “moon” is a niche stuffed with oversized Hummel figurines. I’d still take that moment over strewing roses on the stage in “Se come voi piccina.” I agree with you that the Song to the Moon was probably the single piece highlight for me here. In part, that’s because I think the music largely lives in her best range. But I also found her simplicity here very touching. By contrast, Carmen’s “Habanera,” was full of shtick and awkward tempo shifts. I think it’s a role that would suit her in terms of voice—but I’d want to see it thoroughly worked through with a director and a coach.

CK: The suite of French arias that closed the program were the least successful overall, from the emotionally static “Adieu notre petite table” to the fussy “Dis-moi que je suis belle,” complete with hand mirror. It sort of felt like she was once again performing inside a commercial: “Thaïs by Chanel: Available wherever fine fragrances are sold!” Along the lines of the Song to the Moon, Yoncheva’s straightforward, heartfelt “Donde lieta usci” was another highlight—and for someone who was often frenetic onstage, she understood the value of stillness here. (Her pianist, Julien Quentin, provided deft accompaniment here, with lovely little grace notes, and generally brought operatic weight to music that isn’t naturally suited to the recital format.)

DF: I also think of all the material she picked, that aria—and the role of Mimi—is closest to her natural gifts as a singer. I think even heard here in excerpts with piano (Sidebar: I also greatly admired Quentin’s playing), Aida and Butterfly are a size too big. Frankly, ever since her greatly admired Norma at Covent Garden, I’ve heard worrying signs of wear and tear, including some sagging pitch and incipient wobble. Nothing remotely disastrous, but I would hope she’d pull back. Singing Butterfly at the Met wouldn’t be my prescription. On other picky critical notes, the trills aren’t really trills, either, and she ducked the written D flat in “Tacea la notte placida.”

CK: Butterfly and Aida also don’t strike me as the right path for her. And perhaps it was illness or the need to warm up, but her “Ritorna vincitor,” the afternoon’s first selection, was noticeably off-pitch in several key phrases. On the other hand, the weightiness of her sound suited Dido’s Lament and “Lascia ch’io pianga.” Yoncheva performed frequently with William Christie in her early career, and she surely knows her way around historically-informed performance styles, but the opportunity to hear a singer of her vocal size in this music seemed like a throwback (in a good way).

DF: Amen to that last point. Of course, in the years when I was first coming to know concert music and opera, performances of Baroque and Classical works almost inevitably had a stylistic overlay from the Romantic era. I loved it then… and I still do. Surely there should be room for both? And as you say, in some ways Yoncheva is an ideal ambassador for this. She brings blue chip credentials in terms of stylistic awareness, but also has a voice of uncommon lushness and expansiveness. After “Song to the Moon,” for me it was “Lascia ch’io pianga,” that won the afternoon. I’ve heard that aria a lot, recently—maybe too much—but it was very welcome here. So were parts of “When I Am Laid in Earth,” but the diction was often occluded, and I’d have liked more pianissimo singing.

CK: I got the sense from Yoncheva’s spoken remarks—endearing, but brief—as well as a replayed backstage interview from the HD broadcast of Otello, that English may not be her most comfortable language. In that sense, it doesn’t surprise me that her Dido’s Lament was less textually secure than, say, Joyce DiDonato’s might be. But I give her credit for programming it… and for taking on the role of Marie Antoinette in a forthcoming revival of The Ghosts of Versailles, which Peter Gelb teased at the top of the afternoon. Yoncheva’s career trajectory, from Les Arts Florissants to Puccini heroines to John Corigliano, certainly suggests fearlessness, and I applaud that. I also thought she sounded meltingly lovely in her final selection, Hymne a l’amour. I often think classical singers put too fine a point on Piaf’s music, but Yoncheva struck a nice balance between vocal glamour and earnestness.

DF: Cameron, just looking at the various touchstones here—Corigliano to Purcell, Verdi to Piaf—is its own tribute to an artist of uncommon interest and cultivation. With all my reservations, there’s so much I’d love to see and hear Yoncheva take on—an inevitable reminder than nearly a year after quarantine began, it still continues. This recital is, I believe, the penultimate one that has actually been scheduled, with Angel Blue promised for a future date. For once, I’m hoping that this end really is an end—with a new beginning for in-person opera and recitals not too terribly far away.