Whatever you think of Angela Gheorghiu, she epitomizes a star sound, the kind of voice that’s recognizable within three seconds, and she definitely knows her way around a performance. 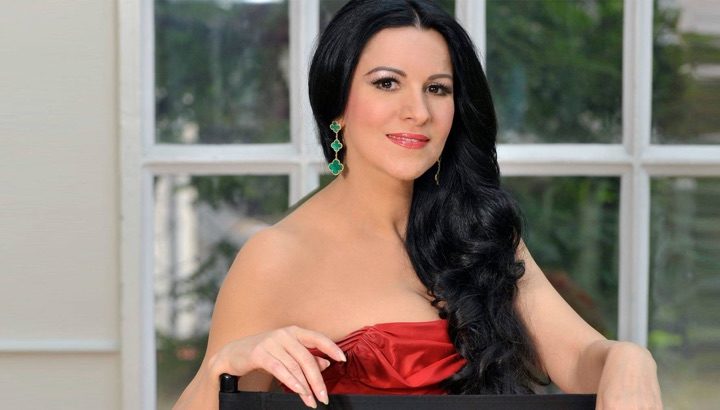 Cameron Kelsall: The Met Stars Live in Concert series has been a balm to many opera lovers, especially as our deprivation of live, in-person performances stretches toward the one-year mark. But the most recent entries in this ongoing string of recitals have taken place with an elephant in the room. As top-tier singers beam into our living rooms from glamorous European locales, matters closer to home are far less happy, with Met stagehands locked out and orchestra members unpaid since April 2020. Controversy arose when the Met hired freelance musicians to accompany its German New Year’s Gala while their contract players collected unemployment. Despite the shutdown, the Met Orchestra is far from silent, as members staged an independent recital as part of its Spotlight Series. The event also featured Angela Gheorghiu, a figure with her own complicated Met history. There’s a lot to talk about here, David: the music-making itself, the circumstances surrounding the concert, and La Gheorghiu’s participation. Where should we start?

David Fox: Well, as Maria von Trapp advises, let’s start at the very beginning—in this case, the opening credits. Within a frame or two, the following statement rolled on screen: “This is a Metropolitan Orchestra Production, not affiliated with the Metropolitan Opera.”  In other words, there would be no pussy-footing around about the situation. There were two distinct sides. In their conversational moments, the Met Orchestra members were utterly charming and earnest. While they said nothing that actively tarred Met management, they also managed to very cleverly reinforce the sense that they—the orchestra—are a family whose lives and livelihoods are imperiled. I found it both moving and very, very sad. A couple of decades ago, one of the treasured New York music subscriptions I kept up was for the Met Orchestra at Carnegie Hall. In those halcyon days, the sense of their prominence in the city’s cultural life was joyous and palpable. And now it’s come to this.

CK: Yes, the times I’ve seen the Met Orchestra in full symphonic mode, they’ve been sensational—the equal of any prominent East Coast orchestra I could name. And here, performing Dvorak’s String Quintet No. 2, the assembled orchestra members played as if chamber music were their full-time job. (They all deserve mention by name: violinists Nancy Wu and Bruno Eicher, violist Desiree Elsevier, cellist Kari Jane Docter and double bassist Leigh Mesh.) The overall excellence reminded me of the Met’s At Home Gala, where Yannick Nézet-Séguin led the entire orchestra in the Intermezzo from Cavalleria Rusticana. It was poignant to see them all forging forward, instruments in hand, and encouraging to hear them play so well, even remotely. These are obviously adaptable, dedicated members of the Met community. String quintets might not be as sexy as Anna Netrebko, but it makes me wonder why the Met proper wouldn’t offer their musicians free run of one sponsored recital.

DF: The Dvorak was gorgeous—as indeed all the music-making was. (And by the way, I thought it was a clever choice to focus on music for this concert opener that was non-opera related.) But for me, at least as important here was the human dimension, and I thought it was handled with an extraordinary sense of dignity and class. This showed even in the setting: unlike the spectacular venues the Met vocal series has been using, we had an elegant drawing room, which reinforced the sense of making music at home. When the musicians spoke to and about each other, it actually made me tear up—especially the tribute to several who have retired or are now about to.  The humanity and graciousness was so different from the rhetoric we regularly hear from Peter Gelb. Look, I’ll admit the union stuff is very complicated, and that there are multiple sides. But I’m appalled that the Met General Manager’s gormlessness makes a difficult situation even more dire.

CK: Indeed. It’s been striking over the years to watch Gelb’s evolution from the PR genius he was touted as at the dawn of his tenure to someone who seemingly cannot open his mouth without inserting his foot. But we probably shouldn’t dwell on the negative. As you say, the concert was as much a celebration as a political statement, and one that made its points best by leaving some things unsaid. The musicians displayed great ingenuity not just in their selection of the Dvorak chamber music, but in their arrangements of two vocal selections for Gheorghiu, who appeared by satellite from Bucharest alongside pianist Alexandru Petrovici. Elsevier—one of the ten musicians who have retired since March 2020—supplied a lush reduction of the Song to the Moon that captured the aria’s Romantic grandeur. The musicians also accompanied Gheorghiu in an arrangement of Anton Pann’s Our Father. Gheorghiu has been absent from the Met since 2015, and it was good to hear her still in fine fettle at 55.

DF: While these musicians can more than hold their own on an international level, there’s no doubt even in the concert’s marketing that Gheorghiu was the marquee name. She’s certainly as famous as the singers who are doing Met vocal recitals, which would probably be the place one would have more likely expected to find her. She remains in her presence a capital “D” diva, and frankly she’s not likely to be anybody’s idea of Norma Rae, as her sweepingly grand entrance in an entirely white gown and cape ensemble reinforced. But to her credit, apparently Gheorghiu herself reached out specifically to help the orchestra—and good on her! Her tonal allure and distinctiveness remains, and if the range is more limited at both ends and the volume a bit diminished, this fragility also adds to her justly beloved sense of line and morbidezza. I thought both pieces were enchantingly delivered.

CK: Agreed. Whatever you think of Gheorghiu, she epitomizes a star sound, the kind of voice that’s recognizable within three seconds, and she definitely knows her way around a performance. That was a fact that became even more evident during the hour-long Q&A that followed the performance…which may have been the most entertaining part of the afternoon.

DF: This is meant in no way as a comment on the concert, but the conversation alone is worth double the ticket price. Talk about the magical powers of true Diva-dom! On stage, even with professional videography, Gheorghiu looked lovely but inevitably older. Sitting in her living room—hair flowing back, in an absolutely ravishing and revealing outfit of blue voile-over-satin—she looked 15 years younger through her iPhone camera! And then there was the dialogue, every word of which I would love to have transcribed. Let’s just say Vera Galupe-Borszkh herself couldn’t not have done better.

CK: Aside from a few questionable comments about the effect of singing heavy Wagner music on the voice, Gheorghiu didn’t make any comments that were too salacious. But it was also not a guarded conversation—speaking with the musicians, it felt entirely spontaneous and unfiltered, a journey through her career as a singer, her association with the Met, and her philosophy of music-making. I’ve interviewed plenty of opera singers over the years, and they tend to be polite, if a touch rehearsed and image-conscious. It’s refreshing to hear someone who just talks. It was also moving to hear the musicians, several of whom are married to each other, discuss the practical elements of life as a working orchestra member: balancing long operas with early mornings getting children off to school, and of course vocalizing frustrations with lack of income during the long shutdown. It wasn’t always an easy conversation, but it was an honest one—no PR gloss to be found.

DF: I just fell in love with her completely. Yes, she has a reputation for being capricious and self-regarding, which was visible here, too. But it’s absolutely clear the members of the orchestra genuinely adore her… and why shouldn’t they? Sitting in her Bucharest apartment for a chatty hour, she’s an utter delight: all Diva, as well as your dream bitchy best friend. You know those lists people make about their imaginary dinner party guests? The ones where they want to be seated between Jesus and Margaret Sanger? I say fuck that—put me next to Angela Gheorghiu and a bottle of Tuica. That’s my idea of heaven.

The concert remains available to stream through March 31 at MET Orchestra Musicians. Tickets are $15, and all proceeds go to supporting Metropolitan Opera Orchestra members during the shutdown.