Like everyone reading this, I imagine, I’ve missed going to see and hear something in person more than I thought possible. 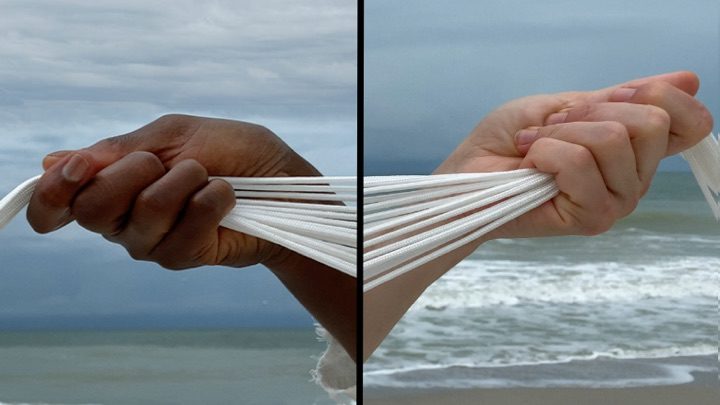 So, to be in the slightly dusty darkness of HERE’s studio on Spring Street, silent, masked and standing alone, I had the feeling of being at least partially reborn.

Starring composer-performers Helga Davis and Shara Nova, Ocean Body took place over three massive screens, full of images of the ocean. (How long has it been since you’ve seen or heard the ocean?) Mark Dechiazza’s intimate cinematography brought out the tactile: the singers’ skin, the feeling of small pebbles underfoot, the freezing shock of water on shoulders.

Davis and Nova appeared wearing a corseted dress for two, linked together by vast handfuls of strings that connected one to the other, allowing them to pull and tug at each other. The costume was created by Annica Cuppatelli, a fiber artist who creates structural garments).

They sing about connection, isolation, the water, something approaching the divine feminine. Davis’s crackling, fiery voice, rough around the edges, suffused with life, contrasted with Nova’s, which was all tumbled glass, translucent and glowing.

It was unsettling, beautiful, cold and warm at once. It felt primordial, somehow, watching the two of them stand on a desolate beach, the water a hazy green behind them. I forgot where I was and when I was.

The piece, which, the program informs me, grew out of the real-life friendship between the two composers and their shared musical interests, presents friendship, particularly female friendship, in a way that is both utterly specific, and—perhaps because of that fact—completely universal.

What strings flow from my heart to hers? Why can they hurt like this? How can they hold me up against falling? How can she be my sister, my lover, my mother, none of these and yet more than all these, some little sliver of my soul that’s washed up on the beach and placed in her pocket?

As I stood there in the dark, I found myself thinking of a poem by Margaret Atwood, which begins:

Marriage is not
a house or even a tent
it is before that, and colder.

A friendship may not be a marriage, at least not in the sense that Atwood means it, but Ocean Body dares to take these relationships just as seriously, shows them not as a pure happy love, or as the worst of media would like to tell us, a roiling pit of jealousies, but as something else. Something colder and deeper, more painful and more wonderful.

The final image shows the two sitting together and apart, gazing forward. They’ve shed their stringed corsets, which lay puddled on the stones behind them, but the ties remain.