The immediate and personal catastrophe interleaves with the general and universal and ancient. 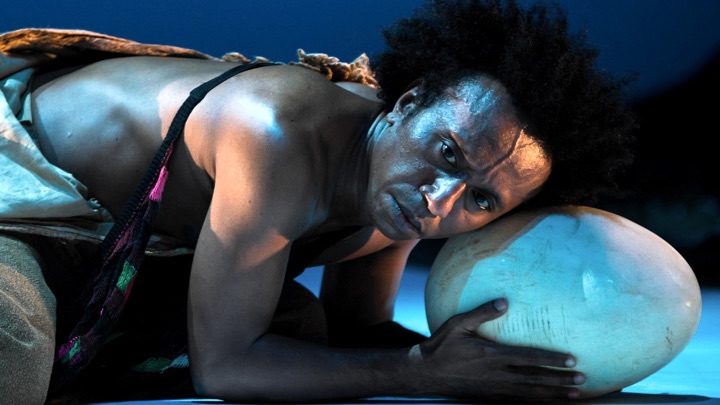 Opera is collaboration to begin with, and as more and more arts have been drawn into the operatic big tent in recent years, it is difficult to say which author is the principal devisor of any given work. You used to just cite the composer. Today: that’s not enough.

In The Planet, which describes itself as “A Lament” and “A Song Cycle,” principal creative credit as the man whose vision weaves together all the artistic contributions, is given to Indonesian filmmaker Garin Nugroho, who composed none of the music. He has made use of many traditions, many styles (native and self-invented), including mixtures of traditional Javanese shadow puppetry, inset film segments, athletic mime-dance and chorale.

The musical side of things, however, is mostly the work of Papuan musician Septina Rosalina Layan, who also sings a leading role, and who has studied both piano and native instruments. She was chosen by Nugroho as his collaborator precisely because of her eclectic experience of both traditional culture and academic training. (An interview with both of them accompanies the video of the opera.) Other persons contributed music, sets and costumes, choreography, dramaturgy and film, and behind it all is the Mazmur Chorale, who sing and chant, dance, and beat time.

The performance is subtitled in simple English (there isn’t much text; there is a great deal of repetition, as in ritual performance everywhere), but is sung in, I suppose, Papuan—but Indonesia has hundreds of languages, and many may be in use.

The music, mostly vocal or rhythmically percussed, is modal in a style that reminded me of the swaying choral melodies of Africa and of American indigenous tribes. Of the gamelan orchestras of the region there is not a trace. But then, they might not be suitable to the several lamenting tales the hour-long piece intends to tell.

Evidently Papuan, like so many other cultures, has a formal style for the ritual lament, with repetition and traditional expressions bound into it. The rituals of mourning, enduring, transforming are tied in this piece to the many natural and environmental disasters that have overtaken the region in recent years, including tsunamis, earthquakes, deforestation, plastic pollution, starvation, extinctions and the Covid pandemic. It is difficult to tell where one lament leaves off and another begins; they breathe together and tie themselves into knots. The immediate and personal catastrophe interleaves with the general and universal and ancient.

Front and center are images created by dancers twisting their bodies into shadowy forms of animals—serpents, turtles, birds, prowling, mating, attacking. A dancer cherishes an enormous egg, that resembles a baby when bound in a colorful shawl. Is he some species that lays eggs, and is he cherishing his unhatched offspring?

Or is it food? It is certainly food for two or three reptilian figures that emerge hungrily from the mud and attempt to rob him of it. They also drive a pair of exquisitely dancing birds from their nest, and stormy surf washes the beach clear of everything except the woman who sings the lament. The chorus listen to her ancient story, or they join in in traditional verses, or they beat time in the corners, or they huddle in the jungle.

A backdrop is created of colored rags—Nugroho says he made a point of contrasting used clothing, once worn by genuine bodies, with sheets and objects of plastic that have never had contact with anything human—which changes under altered lighting into a spectacular tropical jungle. A bare beach swept clear of life by a tsunami and baking in a deathly sun changes abruptly into weird creatures from the mud and the sand and the leaf canopy that only on second or third or fourth look resolve into human beings dancing themselves into monstrous reptiles or insects or elegant, dancing birds.

Some of the transformations are on film, some are before your eyes—the intersections of different textures proceed as serenely, troublingly, as does the music.