Grab a fuzzy robe, a hot toddy, and a Wales guidebook, then sink blissfully into your couch for Bryn Terfel’s Christmas concert for the Met’s Live in Concert Series. 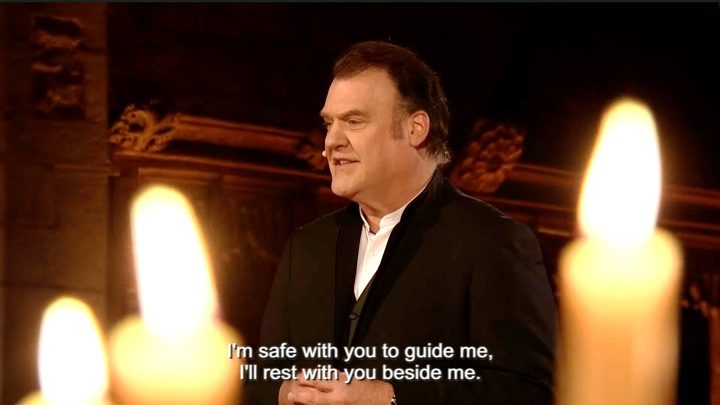 Maybe it’s just 2020; maybe it’s just that Bryn Terfel looks a bit like my dad; maybe it’s just that I’ve spent all week listening Jonas Kaufmann’s positively soulless Christmas album (review forthcoming) and was desperate for a bit of earnestness, but I found Terfel’s program surprisingly affecting. The whole experience was like getting a big hug from classy opera Santa Claus.

Before I go on, let me you tell who this is NOT for:

Everyone else, do yourself a favor; chuck this show on, and let your heart grow a size or two.

Terfel gave us little lessons on Welsh, fabulously and adorably over-pronounced every word he spoke (his rolled r’s are Oscar-worthy), provided his wishes for a “healthier, kinder 2021.” He exuded a calm, easy presence with a hint of opera singer pompousness that only served made the program a teeny bit campy and utterly delightful.

Terfel showed himself to be an intelligent and thoughtful recitalist, even when singing non-operatic repertoire, linking the pieces thematically and lyrically in a way that was intentional without being overwrought. The set list traversed disparate repertoire spanning from musical theater to Christmas carols in four languages to Wagner, but it felt completely cohesive. Terfel absolutely sold every number, even the cheesy first song “Guardian Angel” (the only programming misstep in my book) but, crucially, he never sold out; he sang “In the Bleak Midwinter” with the same sensitivity and grace as “O du, mein holder Abendstern.”

He also sounded very good, showing off a surprisingly nice command of classic musical theater stylings (Ivor Novello’s “I Can Bring You the Starlight” gave us Terfel at the height his sparkly-eyed charm. His Wagner was serene and gorgeous, helped immensely by accompanist Jeff Howard’s excellent arrangement for piano and harp, painted in soft hues and imbued with a slowly spreading warmth. This may not have been the most vocally challenging program, but Terfel used this as opportunity to relax into each piece and show his considerable interpretive powers.

As a patron and supporter of young artists and an ambassador for Wales, Terfel uses his fame and reach to show off the wealth of musical talent in his country, featuring of two pieces by Welsh composer Robat Arwyn, two Welsh rising opera singers, a Welsh band called Calan and plenty of Welsh-language singing.

Terfel has been a star for a long time and carries himself with all the attendant charisma, but he also knows when to step back and let other people shine. Harpist Hannah Stone (Official Harpist to the Prince of Wales, don’t ya know, and also Terfel’s spouse) was Terfel’s main interlocutrix, her gentle thrumming providing a sense of continuity to the program and answering the question “Does Wagner sound good arranged for harp and piano” with a resounding “yes” (or “ie” as one would say in Cardiff).

Calan, the Welsh traditional quintet, added folksy vibes to a few of my favorite Christmas hymns (“In the Bleak Midwinter” and “Ar Hyd y Nos” aka “All Through the Night”) and upped the energy level to a toe-tappy peppiness at the concert’s midpoint. I’ve already downloaded a few of their albums.

Trystan Llyr Griffiths, who was the subject of light ribbing over his difficult-to-pronounce middle name, has a lovely and balanced tenor voice and an Instagram-worthy handsomeness that will surely result in new fans and followers across the world. He gave us just enough of a taste of his sound (singing the Schubert “Ave Maria”- the pumpkin spice latte of classical music) which while still young, foreshadows a richness that I’m excited to hear develop.

Soprano Natalya Romaniw brought an intriguing and sizeable voice in a duet with Terfel by Robat Arwyn. She was perhaps less suited to this sort of pop-classical. She has a Lady Macbeth sort of voice: dark, edgy, and little unwieldy, and her “O Holy Night” was a little too far back in the throat for my taste, but she held her own nicely with Terfel.

This concert is available until Christmas Day, and I can’t think of anything better to have on as I drink wine with my mom and eat Christmas cookies. If 2020 has sapped all your Christmas cheer, this might be just the ticket for you.