A ‘Barbiere’ of quality

What a joy when a comic opera gets you cackling through the whole night, discovering new nuances and perspectives from an oft-seen work and delighted with wonderful singing! 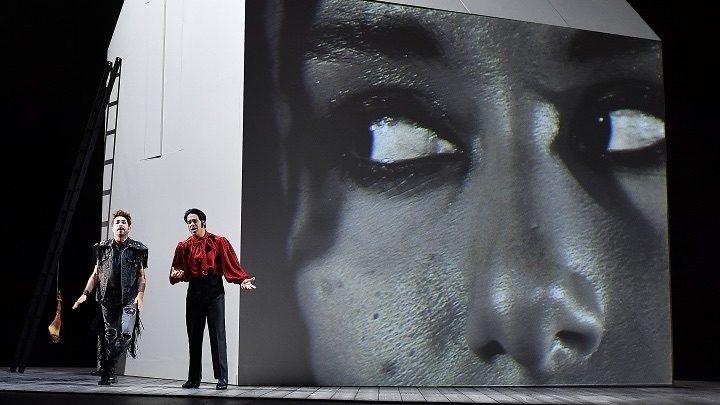 All of this happened with the new Barbiere di Siviglia production at Montpelier.

Instead of staging it at the Opéra Comédie, the Italian style theatre that usually hosts the small size operas, the Montepellier Opéra moved this production to their other hall: the bigger Opéra Berlioz. Using only half of the seats of this modern auditorium style hall to ensure social distance they could still accommodate still 1.000 people. Also the house made a big statement selling all the tickets in the house at the single price of 10€: arts are very much needed specially in these difficult times and they are making a big effort to bring them to all the people. And the people answered to this call, selling out the three initially planned shows and adding a extra avant-premiere.

The cast selected for this production was very attractive and revealed being even better. Paolo Bordogna was a superb Figaro combining an exquisite Rossinian style with superb acting, emphasized by a production that brought out all the wit of the character. His strong voice and magnificent diction helper him to portray a credible hyperactive character, a true factotum. His singing filled the house, projecting with ease every note and vowel in the quick passages. In the duets he blended his voice with the other singers in a remarkable way.

Philippe Talbot has a handsome voice and used it to sing an elegant Count Almaviva that took things with more calm than Figaro. The slow pace when singing “Ecco ridente” or “Se il mio nome,” full of meaningful silences, had the extra result of reinforcing this elegant view of the character and contrasting with the more mundane Figaro.

The young Adèle Charvet debuted the role of Rosina with much success. She got a rich and warm mezzo voice and she sings with a wide range of expressiveness : from the melancholy in the opening of “Una voce poco fa” into a powerful determined woman when she sings “Sì, Lindoro mio sarà.” Her Rossina is a hyper-sensual young girl with a seductive look. Her flamenco dancing during the singing lesson made me long to see her Carmen.

Bartolo was a funny Gezim Myshketa, at the same time showed the tyranny of the character. His voice sometimes lost some volume during the quick notes but otherwise made a good job.

Jacques Greg Belobo (Basilio) was more static in the acting but his powerful voice made a good impression with a imposing Calunnia.

Last but (not leas)t was Ray Chenez as Berta. Yes, a countertenor singing the role of the maid. Another novelty is that he doesn’t sing Berta’s complaint “Il vecchiotto cerca moglie” but rather an interpolation from Chueca and Valverde Zarzuela “La Gran vía”: el tango de la Menegilda, also a complaining song by a maid. Chenez is spectacular singing this part in a very good stylish Spanish and a passionate acting.

Vivid musical direction by Magnus Fryklund replacing the originally planned Michael Schønwandt that included some subtle embellishment in the vocal lines. The orchestra was in good form with some outstanding playing by the wind section.

The production by the young Spanish (from Seville) director Rafael R. Villalobos is genius. It transposes the action from the Spain in pre-French revolution times to another transition in Spain: the recent transition from the dictatorship into democracy that happened between the end of the 70s and the beginning of the 80s. This transition not only had a political side but also a artistic side full of creativity known as “La movida” that enrich the production with many cultural references.

This concept worked extremely well, coordinating what Beaumarchais wrote in the original text with more recent facts. The count from the 18th century is here a capricious rich man, Figaro is a member of one of those rock bands came up during La movida that has to work in a bar to survive. Rosina is a curious upper class girl eager to embrace the new freedom. Don Bartolo is one of those fascists opposed to any progress, especially gay rights. 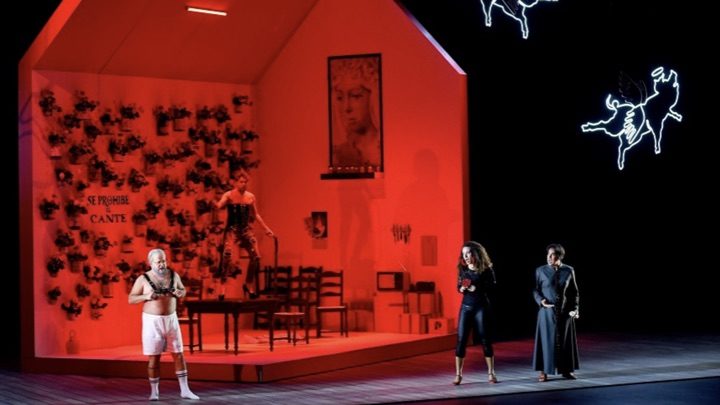 Berta and his partner are two young gays that arrive to the city looking for freedom but only find misery. The officer is a widely recognizable character from Spanish transition: Colonel Tejero, who was the head of a failed coup d’état in 1981 and uses here the very same words Tejero used at the Spanish Congress when firing his gun: “Quieto todo el mundo” / “Nobody moves”.

The sets are a simple small revolving house alternating the balcony and the interior. The lighting helps expanding this space nicely into the huge stage of the Opéra Berlioz and plays an important role on the comic movements (like the running gag of Figaro praising the count with the arms wide open). Some projections over the house during the overture and the storms give some context of what we are seeing reference on stage.

The production includes many homages to Almodóvar movies from La Movida period that work as a third layer of eastern eggs that constitutes a rewarding experience to discover and identify. My favourite one was Berta spiking the gazpacho with drugs, as Carmen Maura does in Women on the Verge of a Nervous Breakdown.

There are many details exquisitely executed : for example when Figaro plays along the guitar for the count (here he plays a spanish “ham leg,” maybe a reference to Almodovar’s Volver) he does  so accurately following the notes from the orchestra.

The coming out of homosexuality from the obscure and repression times of the dictatorship during the transition is clearly reflected on the show. The second act opens with the servant lipsyncing at home to Rocio Jurado (one Spanish diva that all the drags in Spain adore and emulate) singing “Suspiros de España” that is brutally interrupted by Don Bartolo beating him and calling him faggot. And all the hypocrisy of that era shows up as Don Bartolo is later discovered engage in BSDM acts serving Figaro.

Of course, COVID had to make an appearance, so when Don Basilio told he has Scarlet fever everyone puts on a face mask.