Such a sleek, polished finish is a testament to the incredible resources and experience at the Met’s disposal – to coordinate this livestream across two different continents so seamlessly and with such flair is very impressive indeed. 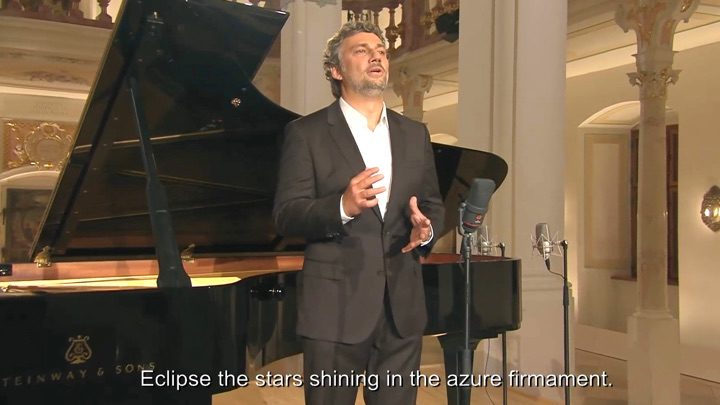 On Saturday afternoon, the Met launched its new Met Stars Live in Concert series with an outstanding recital from Jonas Kaufmann, live-streamed from the library of the Polling Abbey in Bavaria.

With Covid-19 temporarily halting the reopening of theaters (in New York at least), opera companies have been forced to come up with new ways of connecting with audiences. The Met has tapped into its significant digital capabilities, providing free nightly streams from its Met Opera on Demand library; this comes on top of the Met’s gargantuan At-Home Gala, a remarkable feat of technical engineering and operatic talent.

For the Met Stars Live in Concert series, the Met has tapped into its considerable livestreaming experience (gleamed from its highly successful Live in HD broadcasts) to bring us twelve different recitals, performed in various locations around the world by some of the greatest opera stars of our time.

Indeed, Kaufmann’s recital took more or less the same format as the Live in HD broadcasts, cutting between Kaufmann’s performance and an effusive Christine Goerke, serving as host and commentator “backstage” in the Met’s Manhattan control room.

It was a high-tech affair. The Polling Abbey had been completely fitted out with microphones and a lighting rig. At least six high-definition cameras, capable of zooming and tracking around the Abbey’s columned interior, captured every hair and wrinkle on Kaufmann’s face. The entire aesthetic was hyper-cinematic: even before the concert had begun, we were treated to a sweeping high-angle establishing shot of the abbey itself, nestled among the rolling hills of the German countryside like the set for a Hollywood period drama.

The Abbey’s architecture was central to this cinematography. Camera’s frequently panned up towards the library’s trompe-l’œil ceiling or weaved dizzyingly between its ornate columns to provide a 360 degree view of the stage.

Such a sleek, polished finish is a testament to the incredible resources and experience at the Met’s disposal – to coordinate this livestream across two different continents so seamlessly and with such flair is very impressive indeed.

However, these high production values have their downsides. The more that Kaufmann’s recital seemed to be mediated by fancy camerawork and glitzy lighting, the more it lost the overall feeling of “liveness”. That is to say, that such a glossy format veers so far away from the experience of viewing a live recital that it loses all the qualities that make live performance so edifying – the excitement, the proximity, the danger, the grit.

As a result, the entire experience felt rather flat, and, despite the close-up shots, rather distant. All this impressive camerawork merely drew attention to the fact that I was watching Kaufmann’s performance on camera, and not in person.

One of the great joys of the Met’s At-Home Gala was its ad-hoc, DIY feel. All those rough and ready home setups lent a sense of intimacy to the proceedings. It felt raw, authentic, and utterly captivating. Part of me wishes that the Met had been able to recapture some of this authenticity in this new recital series.

Admittedly, the overriding sense of flatness was not entirely the fault of the cinematography – it was exacerbated by a program that offered very little variety.

Kaufmann presented 11 big, soaring arias from ten big, romantic operas (and one big, soaring Italian art song). Within their respective operas, each aria is a showstopper. But back to back, they all felt rather homogenous. They all had similar contours – the same lyrical ebb and flow, the same sweeping climaxes.

Of course, this is the kind of repertoire that Kaufmann performs so well, and the repertoire we all hoped to see. However, I couldn’t help but wish for something lighter, gentler, more intimate (with Helmut Deutsch at the piano, perhaps some lieder.)

This cavalcade of romantic arias also constituted a significant design flaw in the program: so taxing was this repertoire that the program had to be broken up with videos of Kaufmann’s past performances from the Met archives, interrupting the overall flow of the concert.

Goerke, in her pre-concert spiel, with all the flair of an experienced sportscaster, framed the entire concert as if it were a big endurance contest for Kaufmann. And Kaufmann was certainly able to endure such a large, demanding program. Nevertheless, I wish that the tenor had been given more of an opportunity to showcase his lighter side.

This was a real shame, as Kaufmann was in truly excellent voice. True, his high register has lost some of the squillo from his pre-Wagner days, but it has gained a gravelly depth and a remarkable evenness across registers. The real treat was Kaufmann’s messa di voce, which he showcased in almost every aria, swelling from floating pianissimo to full-throated roar at any given opportunity.

Kaufmann brought his trademark ardor to each and every aria – even when he wasn’t singing at full bore, he maintained a focus and an intensity that propelled him through each phrase. There is so much core to Kaufmann’s sound that even his softest, lightest colors seemed to deliver the full depth and breadth of the voice.

Such an outwardly romantic program showcased Kaufmann’s remarkable ability to portray a huge amount of emotion in the voice while style maintaining a consistent lyrical line. The power and beauty of his instrument remained unimpeded by any expressive strain; the sound was invariably full-bodied and robust, despite the dramatic vicissitudes of the repertoire.

Kaufmann opened the program with two arias from Tosca. “Recondita armonia” was sung with plenty of vigor, but Kaufmann and Deutsch did not always seem to be on the same expressive plane – Deutsch played the aria with ease and levity, as if it were a delicate salon piece, while Kaufmann went at it with vein-popping vocal torque. The pair found a middle ground in “E lucevan le stelle”, with Kaufmann easing into the phrases a little more gently, cultivating a delicious pianissimo and a lingering rubato when describing Tosca’s “sweet kisses”.

Kaufmann was certainly at his best when he allowed himself a bit of latitude with his tempi, affording enough room for each phrase to expand and contract. With the exception of the last few phrases (which were tender, yearning, utterly exquisite), “La fleur que tu m’avais jetée” was dispensed with all too much forward momentum for the depth and maturity of Kaufmann’s performance, and I yearned for him to pause a little longer at key musical junctures.

His “Ah! lève-toi, soleil!” also felt a tad square, unfolding rather uniformly for such a wondrous operatic moment, although Kaufmann brought sweeter colors and more variety to the second verse, bringing the aria to ravishing close.

While the first four numbers were beautifully sung if a bit risk-averse, Kaufmann came into his element with an exhilarating performance of “O paradis sorti de l’onde” from Meyerbeer’s L’Africaine. I have heard countless recordings of this aria, yet this performance surpassed them all – radiant and gripping, it conjuring a vivid aural image of the mysterious island the aria describes. Despite the brazen gallantry of the text, Kaufmann brought a degree of vulnerability, even trepidation to his Vasco de Gama, and the aria was more human, more moving as a result.

His performance of Rodrigue’s prayer from Le Cid was just as electrifying, undertaken with an earnestness and a simplicity which slowly boiled over into outright religious fervor. Such a gloriously unpretentious, unencumbered interpretation threw emphasis onto the nuances of the text and the luster of the voice, foregrounding the twilight palette of Kaufmann’s glorious middle register.

This was followed by a refreshingly austere interpretation of “Cielo e mar” from La Gioconda, Kaufmann’s sound taking on a hard, icy hue that warmed into a tender blush towards the aria’s climax. This was aided by a delightfully spartan accompaniment from Deutsch, which allowed Kaufmann’s stirring interpretation to cut through all the more sharply.

Kaufmann’s gut-wrenching rendition of Cilea’s “L’anima ho stanca” included moments of pained pianissimo and thundering severity – although the aria itself is fleeting, Kaufmann’s floating mezza voce often made it feel as if time itself had stopped.

The highlight of this program, however, was Kaufmann’s performance of “Un dì, all’azzurro spazio” from Andrea Chénier, which offered a welcome touch of variety. Kaufmann, one of the world’s foremost Chénier interpreters, delivered the poet’s barbed tirade with stern defiance and a healthy dose of revolutionary zeal. But the real joy was hearing the different vocal shades that Kaufmann brought to Giordano’s quicksilver musical changes, making Chénier’s “improvviso” sound well and truly off-the-cuff.

Kaufmann’s “È la solita storia” delivered another yank to the heartstrings. It was an extraordinary display of technical prowess and dramatic commitment – cool, meditative and desolate. The tenor brought a bright, metallic edge to the aria’s final strains, dispensing them with such force and gusto that the tenor was literally left panting for air.

And, of course, Kaufmann brought the program to the close with “Nessun dorma”, a soft, understated, and moving performance of an audience favorite to round off a rather exceptional recital.

The concert also featured piano transcriptions of the intermezzi from Pagliacci and Manon Lescaut. Both were played with care, buoyancy and elegance by Deutsch, but were unfortunately overlaid with a rather tacky montage of various pictures of Kaufmann, an unnecessary distraction from a performance profound enough to speak for itself.

Although the high-gloss format may have some drawbacks, with tickets just $20 a pop, this is a relatively small price to pay to experience such musical excellence live in your own home. Until in-person performances return, these recitals may be the best way to hear opera’s greatest stars in concert and a great way to while away this never-ending lockdown.