I have seen all sorts of Boris Godunovs, but nothing quite like this. 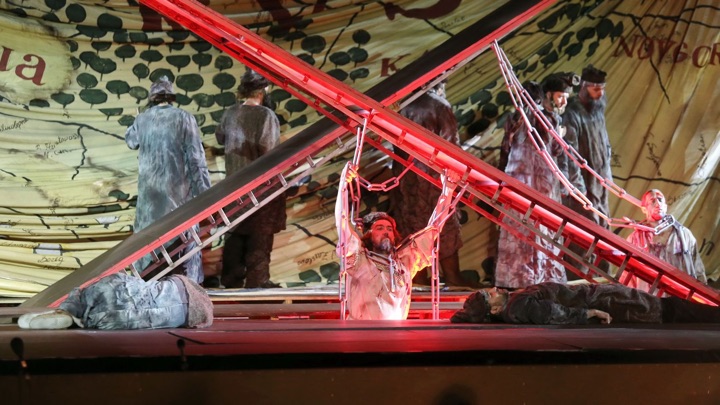 The Sofia National Opera Boris Godunov is currently running on OperaVision. I watched it out of socially-isolated curiosity, but it didn’t take long to grab me by that part of my imagination that responds immoderately to glimpses into the heart of things.

This Boris is steeped the Russian soul, by which I mean the things whose presence make something what it is and whose absence creates a false impression. The fear, terror, joy, and pain, are palpable and real in the way Shatov and Stavrogin in The Devils or Marmeladov in Crime and Punishment are real, men whose open hearts are savaged by cruelty, who turn desperately to vodka, or God, or both. Or neither, and like Kirilov shoot themselves in the head to prove a point. The starets, the singing drunk, the blustering general, and the guilt-ridden murderer are all there, not as caricatures but as archetypes.

They didn’t have to imagine a mise-en-scène; they staged their pageant in front of a great cathedral that supplies the monumentality the story requires, like the pageant wagons in front of Coventry Cathedral in the middle ages. The staging is deft and simple and successfully conjures the Ur-Russia of an Orthodox Church that defeated even Stalin.

Sofia uses Mussorgsky’s original over the Rimskyfied, or Shostakovitchized, or Ravelized turns, before Mussorgsky gave the censors what they demanded, a diva among all those men. The 1869 cast is predominantly male, like “The House of the Dead,” in a theocratic, hieratic, Divine Right state where women were chattel, beaten and silenced.

But it’s not quite the usual 1869 version either, and the website says nothing about what it is. For example, part of the Coronation Scene is spoken. To get a handle on it, I ran it side by side with the Mariinski 2012 Vick/Gergiev/Nikitin Boris (on Youtube), also 1869. The difference is illuminating. The Vick production is set in the late/post Soviet era, the view is distanced, ironic and cynical. I enjoyed it, but compared to the Sofia version, it lacked soul.

I suppose the Sofia Boris is a one-off. It is neither an avant-garde regie reimagining nor a realistic or literal production. It exists in an ephemeral space on the church steps with clamorous bells and Byzantine arches. It is quasi-liturgical, a mystery play on power and guilt.

The singers are not famous, but they are committed and inspired to deliver the reality they are recreating, a world of murderous tsars, drunken monks, police with whips, and crowds with gilded icons staggering with despair. Boris bears the weight of the hundreds of millions of souls conferred upon him by God. From the ecstatic bells of the opening to Boris’s death ravings (where this version ends), everyone, the soloists, chorus, orchestra, conductor, director, and super, give us both the golden splendor and the hell upon which it rests.

Put on your earphones and crank it up. You’ll find out what “barbaric splendor” really means.