Time to stop being coy, I think. You and I had quite different takeaways on the show, didn't we? 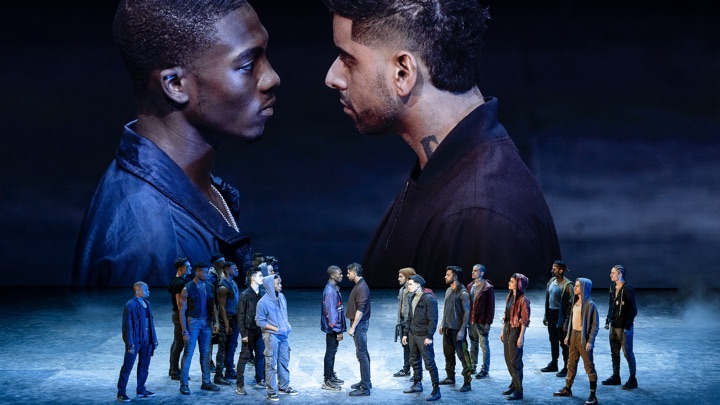 Cameron Kelsall: Once again, David, we find ourselves in the odd position of writing about a show that’s been indefinitely put on ice. This time last month, Ivo van Hove’s transgressive, radically reimagined revival of West Side Story was the talk of Broadway. Today, the only talk of Broadway is when there will be a Broadway again. We happened to catch the final performance of WSS before the COVID-19 suspension began, and even though we can’t currently send anyone to see it, I’m sure we definitely have some thoughts about the production itself.

David Fox: It’s almost surreal that it was exactly one week ago we saw this—the whole event now feels like a kind of did-it-really-happen? dream to me. Much of that, of course, is due to the fact that the world is quite literally a different place today. But some, I think, is also inherent in van Hove’s deliberately destabilizing staging, which—with its already infamous cuts and imposition of video—has a breathless sense of momentum and inevitability.

Time to stop being coy, I think. You and I had quite different takeaways on the show, didn’t we? It took me very much by surprise. I was dubious from the beginning, but gradually opened myself to it. I can tick off any number of elements I find problematic (and I plan to here!), but by the end I was absolutely hooked. On balance, I think it’s sensational.

CK: The prospect of a reinterpreted WSS thrilled me from the outset, but I found it largely ineffective. My perspective is shaped, perhaps, by the fact I’ve been seeing van Hove productions for nearly 20 years. During my early college days in Manhattan, he was a fixture at New York Theatre Workshop, where his daringly deconstructed takes on classic plays (A Streetcar Named Desire, Hedda Gabler, The Misanthrope) vaunted him to the upper-rung of the avant-garde theater world.

He’s brought his show uptown—this is his fourth Broadway outing in almost as many seasons—but what once seemed fresh and audacious has calcified into a kind of schtick for me. The technological bells and whistles and the in-your-face aesthetic feels particularly appliquéd here. I can’t help thinking there have been too many trips to a well that’s already run dry.

DF: I’ve seen only the Broadway work, and had very mixed feelings. In two of those four shows—Network and WSS—he relied on a favorite device, which is video. It should have made sense in Network, but I disliked it intensely—I found it distracting and needlessly showy. Here in WSS, I was completely pulled in. Before going on, I think we need a short explanation of how it actually works, which is tough to describe. 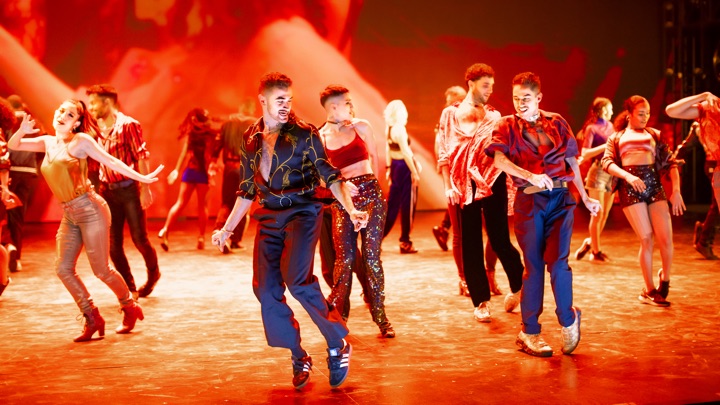 The stage is usually bare except for the actors; but the entire rear wall often becomes a video screen. Sometimes, it shows backgrounds (New York streets, etc.). At other times, it offers close-ups of people we are also seeing on stage. Occasionally, there are scenes we get only through video. Most intriguing (to me, at least) are scenes at Doc’s pharmacy or Maria’s dress factory, which are physically placed at the very back of the stage, giving us only glimpses of the action… but are also seen in towering close-ups simultaneously via video. (Whew! Does that make any sense??)

CK: I’ve come to think that van Hove’s overreliance on video is a symptom of a certain European aesthetic—a style of direction in which the mise-en-scène carries all the production’s meaning, and the performers are essentially interchangeable. (van Hove himself has practically suggested as much—in a New Yorker profile a few years ago, he spoke of requiring actors to come into the process off-book, and that he mostly uses rehearsals for blocking.) The power of WSS comes from the human stories it tells, the ways in which the characters are tragically similar and different. Here, the large cast is able but mostly undistinguished.

DF: I saw the video as a sly acknowledgement that WSS was, in fact, made far more famous through its blockbuster movie than its original Broadway production. I don’t think that’s an accident. There is something inherently cinematic in the source material, and van Hove goes with it—often thrillingly.

CK: I wish I was thrilled by it. Instead, I often felt like I was watching a very expensive movie. But didn’t you feel, as I did, that most of the acting was pretty nondescript?

DF: Yes, I would agree that this production’s cast, while adequate, is rarely more than that. The best acting comes from Daniel Oreskes, who of course is luxury casting in the supporting role of Doc. Among the leads, I thought Shereen Pimentel as Maria was immensely likeable and sang very well.

CK: But neither she nor Isaac Powell (Tony) convey the danger or the overwhelming passion of the pair’s brief love affair. I wonder what kind of performances a more actor-focused director could have culled from them. 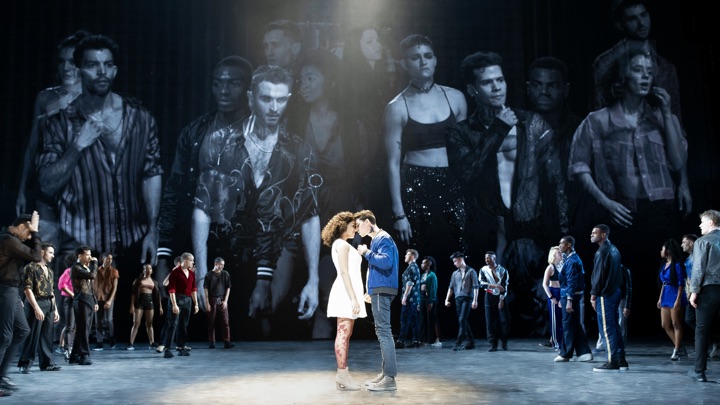 DF: Amar Ramasar was surprisingly effective as Bernardo, and sang at least as accurately as the others. But I’ll acknowledge that’s a low bar. (Frankly, I don’t even know where to begin on the bigger issues surrounding his casting, so I’m leaving it alone.)

CK: Ramasar was certainly better here than he was as Jigger in Carousel. But during the Dance at the Gym, he and Yesenia Ayala (Anita) mostly reminded me of highly proficient contestants on So You Think You Can Dance?

DF: To me, there are two big issues in van Hove’s production that I can’t reconcile. One is the choreography. What Anne Teresa De Keermaeker offers is fine and effective on its own, but Robbins’ work is so utterly beyond anything seen here that we can’t help but fixate on it. (It doesn’t help that Keermaeker herself seems to be thinking about it—the same general movement world she’s created is often similar.) In a way, it’s especially a problem for Ramasar, whose ballet background makes him one dancer here who actually would have aced the original choreography. As it is, he has very little to do.

CK: I don’t know enough about De Keermaeker’s work in general to offer much specific judgment in this context. But unlike the Robbins choreography, which is seared into the memory of anyone who’s seen it, I found I’d forgotten most of the dancing here by the time I got home.

DF: My second problem point—and one I think can’t really be reconciled—is that by making the show more contemporary and… well, “realistic” isn’t the right word, but I’m not sure what is… the inherent grandeur and theatricality of WSS starts to crumble. Of course, we know these are singer/dancer/actors, not gang members. And that Arthur Laurents‘ book and Stephen Sondheim’s lyrics use mock-slang and are far more poetic and arch than actual street argot. In more traditional WSS productions, we can accept this unquestioningly. Here, it’s harder.

CK: I wanted van Hove to go farther. Isn’t that why he was hired—to push the envelope and challenge audience expectations? And what does he give us? An anodyne video of the Jets being strip searched. Put Officer Krupke in riot gear. Make Lt. Schrank really violent and threatening, not just the same old dime-store dick? Although I actually question whether a European director can really tap into the American culture of violence—especially as it’s tied to race and policing—that this interpretation tries to embrace.

DF: That’s exactly my point. Cameron, I know we differ on “Gee, Officer Krupke” in particular as a song—I love it and teach it regularly, since I think it really speaks to the vicious circle of systemic failure by all the institutions we’re taught to trust. But it’s drily comic, and works in a traditional framework as the bookend to Anita and the girls in “America”—here, it makes no sense. (In “America” and a few other numbers, I also regret using the alterations made for the film.)

CK: I say cut it. It serves no purpose to the concept at work.

DF: Agreed. In fact, on that particularly controversial point—van Hove’s edits to the show—I’m totally on board: hell yes to the cuts, including “I Feel Pretty,” a song that cannot die fast enough, as far as I’m concerned. “Somewhere” as a full-blown aria stops the action cold, but the vestiges of it here work. In fact, van Hove has solved what has always been a major WSS flaw—the balance between the overlong first act and the too-short second. Now it works organically as a single piece.

CK: Even though I may seem like the skunk at the garden party in this discussion, I want to end by making clear that I’m glad interpretations like this exist. Especially on Broadway. There’s a lot van Hove gets wrong, in my opinion, but the fact this production (and Daniel Fish’s Oklahoma! last season) happened gives me hope that we’re moving toward a lasting view of classic works as living organisms.

I was dismayed when one prominent critic sexistly evoked a mythical suburban mom who, sitting down to a performance of this staging, would be scandalized beyond repair. That kind of pearl-clutching only exists in certain small, contrarian minds. The capacity audience at our performance—which definitely skewed older, as Broadway audiences often do—was transfixed. And I really wish I was as enthralled as they, and you, were.

1) When I was a college student, I lamented to a professor about the horrible cuts in Peter Brook‘s La Tragédie de Carmen. He smiled and said, “But Bizet’s Carmen hasn’t disappeared—you can still see it whenever you want to. This is just a different view.” Point taken—and never forgotten.

2) Glad you mentioned Fish’s Oklahoma!, because my overall response is very similar: I can and do find fault with many individual choices, but there and here in WSS, the overall takeaway is shattering for me.

3) Scandalizing suburban moms is God’s work. Okay, one more point, even if it means ending on a downer. I’m sorrier than I can say that our readers may not have the opportunity to judge this WSS for themselves.