For a show set during the hardscrabble 1930s, very few of the performances give off an air of downtroddedness. 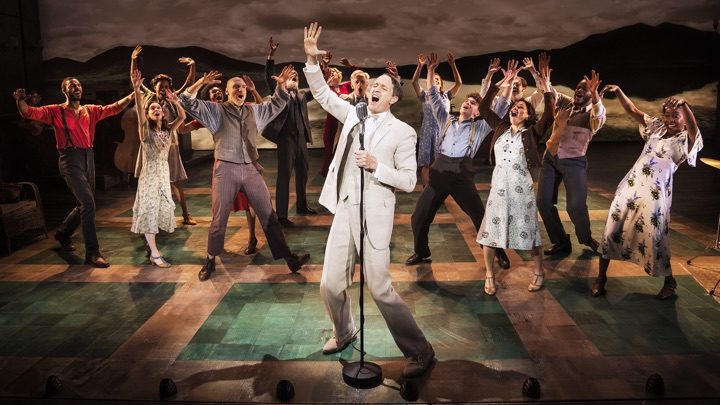 David Fox: Well, first of all, Cameron, perhaps we should acknowledge this solemn and rather sad moment. Even with all the COVID-19 stuff going on, I had little sense till today that Wednesday’s two-show trip to New York—for Girl From The North Country, considered here, and West Side Story, which is coming soon—would likely be our last for some time. It certainly imparts an unforeseen sense of gravitas to these events.

Cameron Kelsall: Indeed. Although lingering questions certainly hung in the air yesterday, the audience at the matinee performance of GFTNC (as we’ll call it for brevity’s sake) didn’t seem any less crowded or receptive than usual. If people were in fear, they were hiding it well. But now that all Broadway performances have been suspended through at least April 12, we also have to wonder whether a small-scale, just-opened musical like this will be able to bounce back—or if it will even return at all. But for now, let’s discuss the material itself.

DF: Based on what I knew about it, I was very curious about how I’d react. On the one hand, I should put out from the start that I’m not a Bob Dylan enthusiast—not that I’m a non-fan, but mostly unfamiliar, except for a handful of very famous songs, which I largely know in his own versions or those by Joan Baez.

CK: I saw Dylan perform live once, when I was a young teenager, and he was fully in caricature mode. I understood maybe three words he sang over the course of two hours. I don’t mean to discount his well-earned legacy, but that experience put me off the idea of delving deeper into his catalog.

DF: I also hold generally negative feelings about trying to retrofit a script with existing songs. And then there’s the script itself. My limited experience of playwright Conor McPherson—through The Weir and Shining City—is equivocal: I love his poetic descriptive language but find his storytelling all too literary. On the other hand, I’m a total sucker for the milieu of GFTNC, which is hardscrabble, Depression-era America (specifically here, Duluth, Minnesota in 1934). Some of my favorite art revolves around it, from Dorothea Lange photographs to William Kennedy‘s gorgeous Albany trilogy.

CK: McPherson—a writer whose work is so steeped in the mythology of his native Ireland, and who (to my knowledge) had never set a play in the US before this one—seems such a weird choice to bring the work of one of America’s most quintessential artists to the stage. To get back to your point about retrofitting: The end result often feels like one of his moody Irish dramas. All that’s changed is the accent, with thick Gaelic brogues traded for Upper Midwest drawls.

DF: Exactly. From my notes: First, “It’s moody and evocative.” Then, “But moody and evocative get you only so far.” By the end, I was more equivocal than ever. On the one hand, it’s an admirably serious attempt to do something distinctive in musical theater, and one that is as picturesque as all get-out. But that’s also precisely the problem. What I remember today after what I saw yesterday is mostly the visual world—bravos for sure to Rae Smith‘s magnificent scenery and costumes, and Mark Henderson‘s jaw-droppingly atmospheric lighting.

CK: In my own notes, I wrote that the production, which McPherson also directed, had been staged with an eye toward photography. The tableaux are striking and memorable, like Lange’s photos, but the net effect is rather static.

DF: Bingo! There’s virtually no forward momentum in the script at all. The storytelling only comes to life in death: when Robert Joy (marvelous, by the way, as a sad-sack country doctor who also serves as the show’s narrator) recaps what happens to several key characters after the action ends. But that’s like reading a short story aloud, rather than a dramatic arc.

CK: Speaking of short stories, I was often reminded of the criminally underproduced musical adaptation of James Joyce’s The Dead, which had a brief run on Broadway twenty years ago in the very same theater (the Belasco) that GFTNC now occupies. Both are really plays with music rather than traditional musicals, and both use their music to comment on the main events rather than in a more traditionally diegetic way. But Shaun Davey’s ravishing score for The Dead managed to approximate the sound of the time and place in which the story was set, and to comment on the action in a more direct, engaged way. Maybe that’s the difference between crafting something original and rifling through a back-catalog.

DF: Given the nature of the existing music here, it’s no surprise that the songs don’t provide a sense of extending or continuing the narrative, but here I’m not sure they even comment on it. Much of the time, the lyrics seemed to have little or no relation to what was ostensibly going on in the story. And while I agree with your “play with music” point, on the other hand, sometimes GFTNC seems to evolve into a large-scale jam session, and essentially forget about the book entirely. (That was my takeaway in much of the second act.)

CK: Perhaps unsurprisingly, the strongest moments come when McPherson attempts to merge musical and dramatic dramaturgy. To me, no sequence is more successful than the one that closes Act One, when Elizabeth, a woman in a state of mental decline, wails “Like a Rolling Stone” as both a metaphor for her own loosening tether on reality and the sad reality of the Great Depression. It doesn’t hurt that Elizabeth is played by the remarkable Mare Winningham, a surprising vocal dynamo and an unfailingly interesting presence.

DF: As for the music on its own, it is certainly well performed, and a lot of the songs are very affecting. But even with my limited knowledge of Dylan, I couldn’t help but miss how much they really needed his very individual voice. This is, without a doubt, a kick-ass company of vocalists—the fabulous Winningham maybe most of all, though she’s every bit as good in the non-musical scenes. But the arrangements, while attempting a period sense of folksiness, often feel too slick. It’s not all the way to Jagged Little Pill‘s vulgar suburbanizing of Alanis Morissette. But it’s a problem.

CK: For a show set during the hardscrabble 1930s, which concerns a boarding house on the brink of foreclosure and the aimless lives of those residing therein, very few of the performances give off an air of downtroddedness. In particular, Jay O. Sanders seems a bit robust and cheerful as the browbeaten proprietor. (Stephen Bogardus, who played the role last season at the Public Theater, was much more appropriately rueful.) Matt McGrath was far too outwardly slippery as a hucksterish traveling bible salesman. Colton Ryan, as an aimless alcoholic youth who aspires to a literary career, breaks the first rule of playing a tippler: He always tries to show the audience how drunk he is.

DF: For me, among the performers, the very positive takeaways were the already mentioned Winningham and Joy. I also liked Tom Nelis as a kind of oddball, is-he-crazy? visitor. (It feels like every Depression-set play or movie needs one. I think of it as The Tom Waits Role.)

CK: Nelis seemed a little too schticky for my taste. I enjoyed Jeannette Bayardelle as a widowed lodger—she’s got one hell of a voice—but her style is also very contemporary.

DF: And among the superb voices, I’d include also Todd Almond, who has a showstopping moment that’s uncomfortably reminiscent of Hector Babenco‘s Ironweed movie; and also Luba Mason.

CK: Even with an onslaught of talent, the show itself just doesn’t work. Gifted performers only get you so far, right?

DF: Alas, yes. In keeping with the mournfulness of the day, while I greatly respected the earnestness of the attempt, Girl From The North Country felt stillborn.