It’s difficult to discuss Unknown Soldier without considering the impact of legacy. 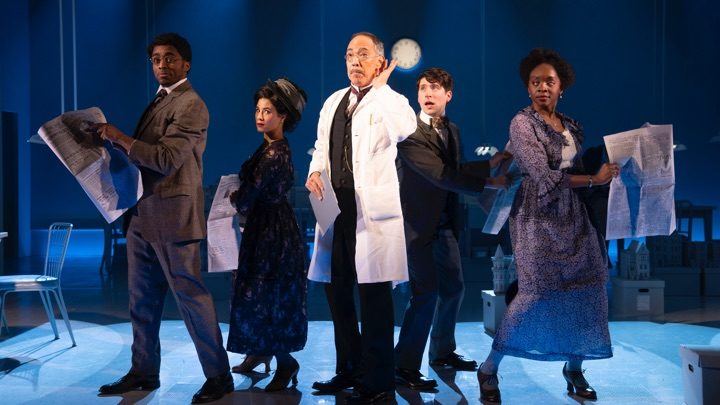 Cameron Kelsall: The musical—written by Daniel Goldstein (libretto/lyrics) and Michael Friedman (music/lyrics)—tried out at the Williamstown Theatre Festival in 2015; it’s just now reached New York in a Playwrights Horizons production. In the interim, Friedman died, suddenly and shockingly, of HIV/AIDS at age 41. “[N]ow that Michael is gone,” Goldstein writes in a program note, “the play itself becomes an object in time, a place where we can look for him, in his humanity, his frailty, and his incredible intelligence.” As critics, David, this puts us in a peculiar and slightly awkward position: Must we not consider Unknown Soldier on its own terms, sui generis, and as a tribute to a beloved, much-missed artist?

David Fox: Honestly, I can’t recall a more dizzying ride than watching this show—my opinion of it changed so often along the way. Some scenes and songs I found completely successful and hauntingly lovely. In other moments, I admired the bold attempts, while feeling that Friedman and Goldstein actually didn’t realize their ambitions. And frankly, occasionally I found it hackneyed, derivative, and far from ready for prime time. But to speak to your point, that’s just it: Friedman’s death deprives him and us from the opportunity to see the work evolve further. For better or worse—and I think, heartbreakingly it’s both—we must now judge Friedman’s Unknown Soldier as it stands.

CK: Indeed. I’ll start with the most positive takeaway, which is also the most bittersweet: The majority of Friedman’s writing is gorgeous and serves the material extremely well. He crafts a musical language grounded in minimalism that achieves the hypnotic, slightly unsettling goals of that compositional school, but he also manages to make the music sound lush and ravishing when needed. The show itself spans three distinct time periods, and Friedman exhibits an effortless ear for weaving era-specific style into the score’s overall fabric. This includes big-band and Americana for the 1920s; pop harmonics and a slight flavor of funk for the 1970s; and spare, alt-folk amalgam for the present day.

DF: Well, I guess I’ll be the (partial) naysayer here, although I’m with you on admiring the way Friedman handles the multiple time frames through music. I was also very taken with a couple of the ballads, including especially a song for the title character (called both “Francis” and “John”) entitled “The People Stare.” But I was much less enamored of a frequently used device that sets filterless stream-of-consciousness narrative passages to contemporary recitative-ish music. I believe my first exposure to this style was in Jason Robert Brown’s The Last Five Years, where it felt fresh and clever (mostly I loathe that show, but never mind), but since then, it’s become cliché of contemporary musical theater writers, and I want it to disappear.

CK: I understand what you mean, but I disagree somewhat. For the most part, I think Friedman and Goldstein handle that sort of patter-ish dialogue-set-to-music very well. Early in the show, two characters sing an intersecting duet (“The Worst Town in New York”) that is simultaneously funny, depressing, and revealing in the ways it delineates their personality traits; the music and lyrics pack a lot of dramaturgical punch into roughly two minutes. There are other numbers in the score that serve a similar purpose, with equal success.

DF: A rare moment of disagreement! I didn’t like that song at all–I found the best/worst juxtaposition gimmicky, and thought the whole thing too twee (that’s a word I wrote several times in my notes). But that piece is nothing on what to me is the low point: a song for Ellen, an obstetrician by profession, which virtually defines the term “overshare:”

CK: I won’t argue the merits of that particular song, which is awash in treacly sentimentality. 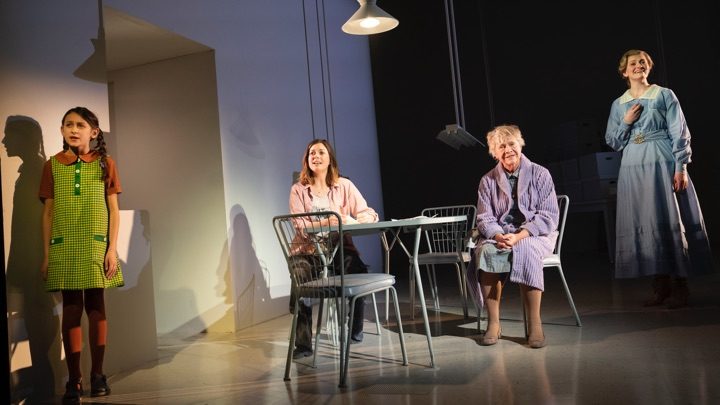 DF: I’ll say this, though: it’s the only musical theater song I’ve ever heard that has the words “vagina,” “uterus” and “fetus” in it. Shouldn’t we have equal time? Where’s the prostate song?

CK: Before we get ahead of ourselves, perhaps we should talk a bit about the plot, since this is likely to be a new show for most readers. The main plot thrust of Unknown Soldier involves the aforementioned Ellen, who returns to her childhood home after the death of Lucy, the grandmother who raised her. Cleaning out old boxes, she finds a newspaper clipping of Lucy as a young woman, picnicking with the title character, who returned from World War I with no memory of his identity. She sets out to understand her grandmother’s past—we learn that Lucy was cold and secretive toward Ellen as a child—and enlists Andrew, a research librarian from Cornell. As you can see, there are several storylines at play: romance, combat, family trauma, historical mystery, etc.

DF: Whew! Good for you—I didn’t think it would be possible to summarize it in a paragraph! Here too, I felt conflicted. It’s a terrific idea for a theater piece, and in many ways I think Goldstein’s book puts it together elegantly and clearly. But ultimately, I don’t think the power of the idea is fully realized in the show. But the production certainly gives the show all it can, including especially Mark Wendland’s spectacular set, which effectively mashes-up so many of the show’s narrative arcs. Trip Cullman’s direction is fluid, and it’s all beautifully lit by Ben Stanton.

CK: On this front, we’re in total agreement. Cullman tries to keep the narrative flowing seamlessly between the periods, but there’s only so much he can do. The 1920s/Unknown Soldier storyline is far more compelling than the present-day archival quest, which often devolves into self-conscious neurosis and romantic comedy cliché. And although we hear often from adult Ellen about her fraught familiar relationship, we don’t see enough evidence of it. Despite the formidable presence of Estelle Parsons as Lucy in the 1970s flashbacks, that section remains strangely underdeveloped.

DF: Yup. Total agreement. I’m glad you brought up Parsons, who was also in the Williamstown premiere production in 2015. Five years later might not seem such a big thing, but Parsons is now 92 (she’s not shy about it, so why should I be?), and her devotion and undiminished power as an actor/singer–as well as genuine member of an ensemble cast–is genuinely inspirational. I also greatly admired Margo Seibert (Ellen).

CK: Parsons is so remarkable—her energy, her timing and her still-sweet singing voice with dead-on pitch should be the envy of any performer half her age. It made me wish she had more to do! In general, I thought the entire production was cast from strength, although Seibert (a remarkably likable presence with a stunning voice) might be a hair too young for her jaded, middle-aged character. As Young Lucy, Kerstin Anderson perfectly captures youthful exuberance and displays a bell-clear soprano. I kept thinking how wonderful she’d be as Fiona in a Brigadoon revival. Perry Sherman brings the right note of brooding disorientation to the Unknown Soldier.

DF: Yes to all that. I find myself back on the roller coaster—there’s much here to like, and so much more that I want to like, but to me, sadly, it just doesn’t work. I’m not ready to say Unknown Soldier belongs entombed at Arlington, but neither do I think it’s ready for major stages.

CK: The sad part, of course, is that it’s likely as ready now as it ever will be.