Bess is clearly Angel Blue’s part—set in the richest and most shimmering upper middle portion of her voice, and optimally suited to her persona. 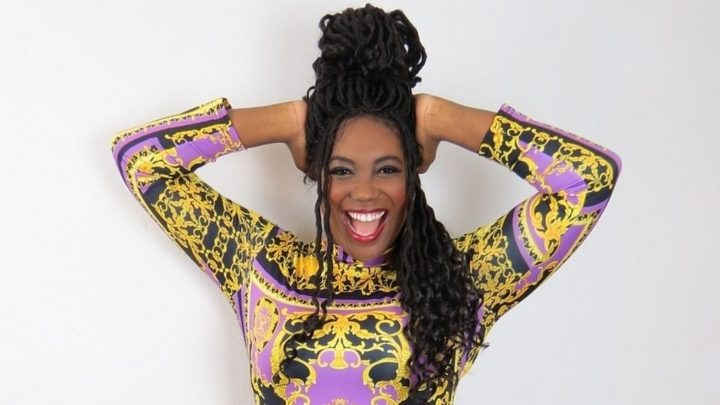 I officially attended Philadelphia Orchestra’s concert of highlights from Porgy and Bess at the Friday afternoon performance… but as it happens, I got an unintended preview the night before.

On Thursday, as I was milling around the Kimmel Center during intermission break for a performance of Albert Herring at the chamber-sized Perelman Theater, from across the lobby in Verizon Hall came the unmistakably grand sound of a chorus at full throttle. They were, of course, part of the concert I was to see the next day—and the energy and excitement I heard even from behind closed doors was an positive sign of things to come.

Indeed, actually hearing that concert at Verizon sometimes filled my hopes. Marin Alsop is a masterful conductor in American repertory generally and Gershwin in particular, and her propulsive, rhythmically alert reading of the score—superbly played by the Philadelphia Orchestra—was often ideal. The Morgan State University Choir, brought in for these performances, could hardly be bettered, mastering both the classical and looser jazz styles with an easy sense of idiom.

So far so good, but…

What was called here “Highlights from Porgy and Bess” comprised the second half of the concert, and only represented around 70 minutes of the score. While the excerpts were mostly well-chosen—and included virtually all the famous numbers—the piecemeal assemblage invariably but infuriatingly sapped Porgy of much of its taut theatricality.

The stiffness of a concert performance is particularly awkward for this work, and the four featured soloists—all of them veterans of Porgy productions—weren’t entirely able to overcome it.

I’ll start with Angel Blue, since her Met performance as Bess this season was something of a sensation. Also, here we had the interesting plus of hearing her also do (à la Leontyne Price in her famous RCA recording) the roles of Clara, Serena, and even for a moment Maria!

Bess is clearly Blue’s part—set in the richest and most shimmering upper middle portion of her voice, and optimally suited to her persona. She doesn’t have quite the ethereal float or innocence for Clara; and on the other end of the spectrum, not the potent lower register for Serena, though she was musical and appealing throughout. Still, she was manifestly the star, and even within the limitations of a concert performance, her radiance and warmth shine through.

Lester Lynch certainly has the gravitas for Porgy, as well as the wide range. He and Blue were at their considerable best in “Bess, You Is My Woman Now;” in “I Got Plenty O’ Nuttin” and elsewhere, he didn’t always have the ideal rhythmic elasticity. Some stiff phrasing also compromised Kevin Short’s Crown, and his formidable bass-baritone took a while to warm up.

Chauncey Packer has pretty close to the ideal character tenor for Sportin’ Life, and he projects both voice and personality with ease. He should have been a perfect fit, but maddeningly he wasn’t—because he continually goosed up the musical line of “It Ain’t Necessarily So” and “There’s a Boat Dat’s Leavin’” to deleterious effect. (Why, oh why don’t singers trust the Gershwins and find the humor and innuendo that’s built into the score?) Packer also downplayed the threatening aspect crucial to the role.

The audience clearly loved it all—and by the way, the Porgy excerpts are being recorded for a Pentatone CD release, where some of my objections will likely not matter. But for me, it was a decidedly mixed bag.

In fact, to my surprise, I actually enjoyed the short first half of the program considerably more.

Alsop led two recent works, heard here in their Philadelphia Orchestra premieres, by female composers. Gabriela Lena Frank’s Escaramuza is a winning overture-length virtuoso exercise for the orchestra, that begins and ends with some thrillingly punchy percussive writing; in between which there is the murky, moody musical feel of a Hitchcock movie. But if Frank’s work recalls a bit of Bernard Hermann, it is nonetheless highly original and entertaining.

I also admired Jessie Montgomery’s Coincident Dances, another short orchestral piece that manages to capture the diversity and electricity of urban New York. Again, I made a mental association with another work—the elongated dance opening of Bernstein’s On the Town, which is a favorite score of mine—though once again, Montgomery’s composition is very much her own musical language.

Between these two works, we had our first introduction to the Morgan State Choir, heard a cappella, under the direction of Eric Conway, in a gorgeously rich arrangement of the spiritual “Done Made My Vow to the Lord.” Given the position on the program, it was likely this piece that I heard from across the lobby. It was even more expansive and wonderful in person, with exceptional blending with the choir, and some marvelous solo work by baritone Cameron Potts, and alto Jocelyn Christian.

We all may have come mostly for the Gershwin and Alsop—but it was this stunning chorus that left the most profound impression.