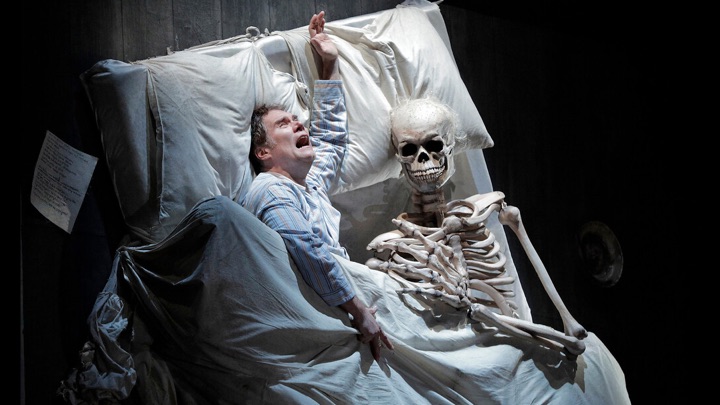 Lyric Opera of Chicago’s revival of Tchaikovsky’s 1890 masterwork The Queen of Spades (Pikovaya Dama) has a great deal going for it: Thrilling singing and dramatic commitment from a virtually perfect cast, from the leads to the smallest roles; masterful conducting by Sir Andrew Davis leading a superb job by the Lyric Opera Orchestra; and wonderful work by the Lyric Opera Chorus under Michael Black and the Chicago Children’s Chorus under Josephine Lee.

What it doesn’t have, alas, is a completely cogent production. Original Director Richard Jones and revival director Benjamin Davis have created a staging that veers wildly between fascinating and fatally flawed.

Based on an 1833 short story by Pushkin, Queen of Spades is an opera about obsession. Jones and Davis focus their attention on the deteriorating mental state of the opera’s main character, Gherman, who has become desperately in love with a woman he sees in the park, even though he doesn’t even know her name.

The woman turns out to be Lisa, fiancée of the wealthy Prince Yeletsky. Gherman is also an inveterate card gambler and usually a loser. He becomes obsessed when his friend Tomsky describes how the Old Countess, Lisa’s grandmother, discovered the secret of the three cards that would always win. His dual obsessions snowball into tragedy and death as Lisa leaves the Prince for Gherman, only to discover that his gambling addiction has taken priority over their love.

During the overture, we are greeted by a huge front cloth of the Old Countess as she had been in her youth when she was called the “Venus of Moscow.” As the overture ends, the portrait slowly ages—another symbol of deterioration. The fascinating premise of the direction is that the staging reflects what reality looks like inside the mind of Gherman.

From the beginning when he is literally chasing Lisa through the park through the skewed perspectives of John Macfarlane’s expressionistic sets and costumes, we watch Gherman’s mind crumbling in a Wozzeck-like world he cannot control. This idea works beautifully through Acts One and Two. 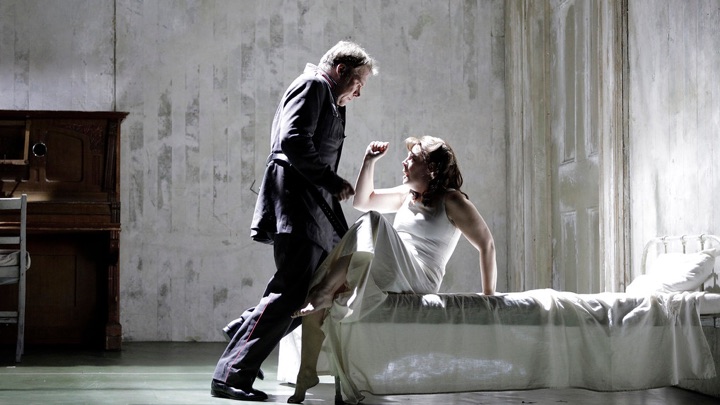 But beginning with Act Three, directorial choices go off the rails into self-indulgent bits that undercut the harrowing drama this act promises. First, in scene one, Gherman desperately tries to sleep while unable to put the Countess’ death out of his mind. When in the libretto we should see the ghost of the Countess appearing to Gherman to secure that he will marry Lisa in exchange for the secret of the three cards, instead we get the Countess represented by a giant skeleton which suddenly appears on the bed and moves its mouth to the Countess’ offstage singing.

The audience howled with laughter when Gherman and the skeleton embrace, completely undercutting the edgy emotion of Gherman’s fate. As the blackout came, a woman in the row in front of me turned to her husband and whispered “Cute!”

Gherman has received a note from Lisa, asking him to meet her “at the embankment, where we’ll be alone.” Well, the embankment is actually the park scene from Act One Scene One, and we’re certainly NOT alone—troops of people criss-cross the stage with Lisa trying to find Gherman in the crowds. Then, at the end of the scene, does she throw herself into the river? No. She kills herself by putting a plastic bag over her head and twisting it.

Then, in the final scene in the casino, we get Tomsky (played here as a kind of leathered thug) singing to an inexplicably effeminate male dancer with homoerotic undertones. All these moments are utterly distracting, risible, and undercut the snowballing tragedy at every turn. And, oh yes, back comes the skeleton again, peering through the skylight as Gherman dies.

It is virtually miraculous that the cast manages to overcome these directorial distractions. Brandon Jovanovich is a splendid Gherman, his clarion tenor soaring over the orchestra with pure, honeyed tone. He marvelously gives his all to the emotional commitment of this constantly on-edge character, and his portrayal of mental deterioration is deeply felt and deeply moving.

Sondra Radvanovsky sings gloriously as Lisa, sensitive and nuanced but with all the requisite power for the climaxes. But she is directed (I assume) to be too much of a neurotic, awkward girl from the very beginning. It’s hard to believe her as the girl everybody falls for obsessively. 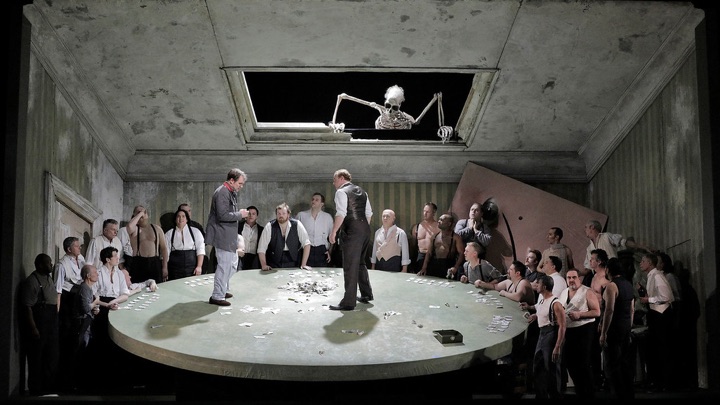 Lucas Meacham brings his trademark power and warmth of sound to Prince Yeletsky, and his beautiful second act aria garnered a well-deserved ovation, sung like he was wrapping Lisa in a soft blanket. Bass-baritone Samuel Youn delivers a cynical and manipulative Tomsky, potent of voice and physically expressive.

It was a pleasure to hear 67-year-old mezzo Jane Henschel in her Lyric debut as the Old Countess, though her character was stripped of charm and dignity, here played as a doddering old harridan. We had real luxury casting in the fine mezzo Elizabeth DeShong as Pauline and Jill Grove as an overbearing Governess.

Despite the somewhat jarring directorial choices, the singing and playing were so good that I can solidly recommend this production for the music-making alone. The production brought a number of insightful moments and pictures to the stage, beautifully lit by Jennifer Tipton and revival designer Chris Maravich. Davis clearly has a strong attachment to this music, and he led a stirring, emotional reading of Tchaikovsky’s lush, romantic score.