Dolly definitely did not have me at Hello! 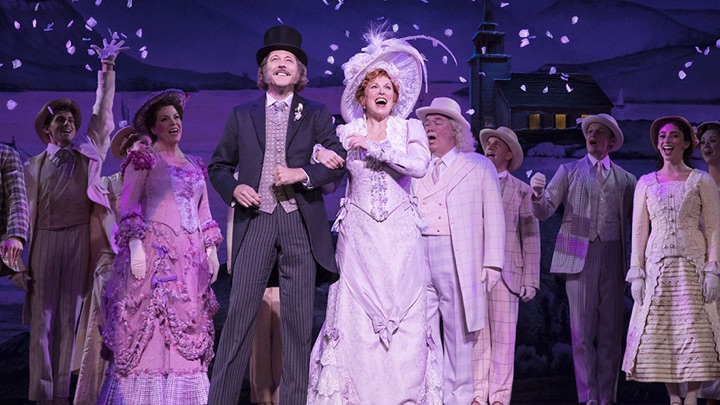 I first saw Hello, Dolly! in 1982. I finally saw the end yesterday.

Yes, it’s a long show… but the running time isn’t quite 38 years. I should explain. My first Dolly was the Los Angeles stop on a tour with Carol Channing that one might reasonably have expected would be her last.

It wasn’t, though: more than a decade later, she was still going strong.

Channing was as uniquely droll and delightful as I’d hoped—but the show itself felt simultaneously wound-up and worn-out, and I ditched it after the first act. True story: days after, I had dinner with a friend who was in the original cast. When I suggested that it must have been a lot better when it originally opened, he quickly shut down the conversation: “It was always awful,” he replied.

I wouldn’t quite go that far. But I think assessing this 1964 musical juggernaut (music and lyrics by Jerry Herman; book by Michael Stewart) is certainly complicated, including a history that goes back decades earlier.

Let’s start with the source material: Thornton Wilder’s absolutely lovely 1954 play, The Matchmaker, where a widow in 1880s Yonkers is trying to make a new life for herself. Four years later, that play was mad3 into a movie.

And now, please, allow me this brief digression.

If you have not seen The Matchmaker film, drop everything and watch it! All four leading actors—Shirley Booth, Paul Ford, Shirley MacLaine and Anthony Perkins—individually and together are as close to perfection as any ensemble I’ve seen, absolutely brimming with comic charm and heart. As great as Booth is in—well, everything, but let’s say Come Back, Little Sheba—what she does here in effortlessly moving from hilarious to heart-rending in a single line is beyond praise.

Back to Dolly—and specifically, to the transition from straight play to musical. Herman is an extravagantly gifted tunesmith by any standard, and his score includes several pieces that I love (“It Only Takes a Moment” and “The Motherhood March” especially). But his imagination as a lyricist is far more conventional than Wilder’s mixed-tone play, which, in the latter’s characteristic way, juxtaposes humor, tears, and slyness. Herman instead has homed in on all the likeliest song-button moments, and buttoned them up still further with numbers that underscore single moods, from sentiment to comedy.

By contrast, book writer Stewart smartly retains some sense of the Wilderian bite by keeping much of the playwright’s own language. Often, though, it’s necessarily truncated—also with sugar added and spice reduced, and occasionally goosed for broader humor. Dolly’s book has the kind of streamlined efficiency that one welcomes in a musical, at least in theory—but the loss of supporting characters, broader themes, and a complex sense of texture is considerable.

Though New York Times’ critic Howard Taubman, reviewing the premiere production, noted occasional “lapses of taste” and “a tendency to whip things up,” he mostly succumbed to the show’s charms, and especially its leading lady. “Let us rejoice in the blessings ‘Hello, Dolly!’ bestows,” he proclaimed midway through his assessment.

The world seemed to agree. The original production ran on Broadway for nearly eight years, and the tour I saw 12 years after that was essentially the same show—but to me, what was meant to be postcard pretty now looked kitschy and faded. Worse, any sense of gentle humor and nuance that Dolly once had was largely lost in a fusillade of comic shtick.

I missed the Broadway reboot with Bette Midler and others, which was helmed by director Jerry Zaks but clearly followed Champion’s original contours. When I say “missed,” I really mean skipped. I wasn’t sure I needed to see Dolly with yet another overlay.

Finally catching up with the show this week via the tour, it was all I feared… and then some.

Zaks’s staging—or at least, what it looks like here—is cranked up full throttle throughout. What would Taubman have made of this show, I wonder? The garish costumes, the gimmicky scenic pieces that slide and turn and roll, frequently pulling focus from the performers? (Both, by the way, by the usually superb Santo Loquasto.) The look is less Currier and Ives than comic book. The poses struck and the little applause-getting “bumps” that were a piquant Champion feature now look like cheesy tricks.

And then there is, of course, the star. Initially, I was in Carolee Carmello’s corner. Her basic quality is tougher than most Dollys—indomitable, rather than vulnerable. Her clarion voice shows inevitable signs of wear, with a prominent vibrato and steely edge now permanent features. But several great Dollys have done well with much less. Carmello’s comic timing is good, and her energy boundless.

But rather than finding more colors as the show went on, her performance got exponentially broader and more driven. She seemed unable to resist the temptation to drag out every “bit” well beyond its natural life, climaxing in a food scene in the courtroom that borders on grotesque.

To be fair, it’s not entirely her fault. A more thoughtful production could do something intriguing with Carmello’s inherent hardness: though Stewart and Herman softball it, Dolly is, after all, something of a grifter. But Zaks’s work here, all showbiz glitz, isn’t interested.

Carmello, at least, has a kernel of star magnetism. The rest of the cast, playing their roles as broadly as she does hers, can’t even claim that. Analisa Leaming as a hoydenish, coarse Irene Molly struck me as the worst, but frankly there’s not much to choose from.

The hard-working dancers come off best, but even they look largely like they’re dispatching a professional responsibility, rather than living in an actual world.  In the final sequence of the first act, one of Stewart’s borrowed-from-Wilder speeches has Dolly exhorting that she has “decided to rejoin the human race.” I fervently hope she convinces the rest of this twitchy, robotic company to do the same.

Perhaps someday, I’ll give Dolly another chance. While I wouldn’t describe myself as an eternal optimist, I do believe a genuine rethinking—quieter, sweeter, softer, less driven and more character-focused—could work.

As for this one, “revival” is the wrong word to describe the hyper-energized but terminally charmless touring show. It’s a Dolly that definitely did not have me at Hello!