Winter weather has taken a toll on the cast of Lyric Opera of Chicago’s revival of Puccini’s Madama Butterfly. 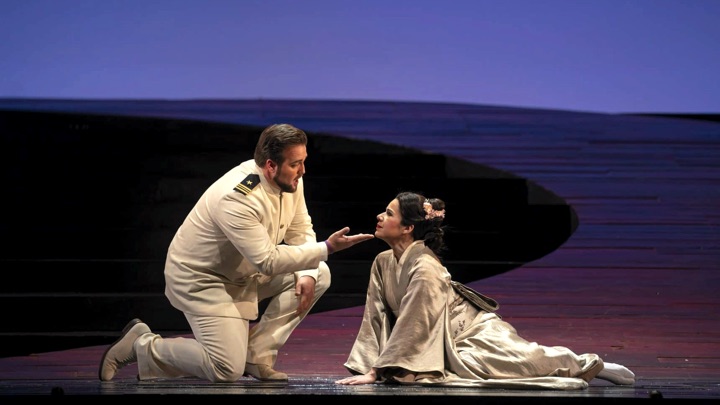 At Sunday’s matinee, the afternoon began with the announcement that, due to illness, there would be a number of cast changes.

The most important was that Sharpless, the American consul, would be Ricardo Jose Rivera, replacing the indisposed Anthony Clark Evans. But a number of smaller roles would be covered with new singers including the Imperial Commissioner, Yamadori, and Kate Pinkerton.

All these changes led to an unfortunately tentative first act, especially Butterfly’s entrance and the Wedding Scene. Michael Grandage’s production, via Louisa Muller’s revival direction, didn’t help either. Poor Butterfly sang her difficult entrance music from far upstage, in rather indirect lighting, and conductor Henrik Nanasi drove the orchestra so hard that she can barely be heard.

Christopher Oram’s set is lovely and simple, but its sweeping staircase and screens used for Butterfly’s house don’t allow for moments of real intimacy. The entirety of Act One just felt a bit “off” except for tenor Brian Jagde’s (I only just learned that his last name is pronounced “Jade” like the gemstone) swaggering, potent Pinkerton.

Madama Butterfly always packs an emotional punch, even with the #Metoo and cultural appropriation issues discussed in a program essay. The tale of the innocent geisha Cio-Cio-San, seduced into a “ninety-nine year marriage contract” (that can be cancelled at the end of any month) with the American sailor B. F. Pinkerton, who simply plans to use her until he can find a “real” wife in America, is both tragic and somewhat cruel. The clash of cultures and religion gives real depth to Puccini’s soaring melodies and the libretto by Giacosa and Illica.

Lyric Opera’s revival comes to vivid life after intermission. Three years have passed, but Butterfly still waits for Pinkerton’s return; of course, she now has Pinkerton’s son. When her servant Suzuki expresses doubt about his return, Butterfly launches into the great aria “Un bel di vedremo.” Anna Maria Martinez soared in this aria, expressing defiance, desperation, and longing. The effect is galvanizing. You could feel the audience suddenly come to life as well, realizing that the turgid first act would be replaced by deeply affecting acting and singing in Acts Two and Three.

Ms. Martinez is an utterly moving and touching Butterfly, singing with otherworldly beauty throughout. She is childlike, vulnerable, and Ms. Martinez completely embodies the role. She brings a compelling emotional depth to her character and brings a marvelous expressiveness of face and physicality. There is a quiet strength and generosity of spirit in this Butterfly that elevates her above victimhood.

Her final scene with her child is the most moving of my experience with this opera, and in this production, rather than sending him away to play, she blindfolds the child with her white sash and moves away upstage to commit the final tragic suicide. I think I had forgotten that the role of Butterfly was such a huge sing! And after a first act when I feared that Ms. Martinez didn’t have the necessary power to be heard over the orchestra in the major climaxes, she seemed to gain in power and stamina as the afternoon progressed. It’s a magnificent performance.

Jagde was a fine Pinkerton and sings with real power, and, if perhaps he could have used more variety in volume and vocal color, he did a very fine job of moving the character from the swaggering selfishness of Act One to his remorseful Act Three. There was a delightful moment in Jagde’s curtain call when, among the bravos, some audience members booed his “villainous” Pinkerton. Jagde shrugged, smiled, and mouthed “I know, right?”

Deborah Nansteel was a moving, steel-spined Suzuki, utterly empathetic to the plight of Cio-Cio-San. It was a pleasure to see Rivera completely authoritative in stepping in for Sharpless. His rich baritone and confident stage demeanor were a pleasure to behold. Rodell Rosel was appropriately oily as the marriage broker Goro, but was unable to overcome the stereotype of the mincing, fluttery Japanese villain. Marianna Kulikova sang well as Kate Pinkerton, but was a bit too haughty and unsympathetic.

Nanasi gave a nicely propulsive reading of Puccini’s lush orchestration, but drove the many climaxes too hard—they seemed merely noisy and clangy, lacking in nuance and clarity. His conducting created a series of fine moments, but lacked the shaping of the overall whole. The Lyric Opera Orchestra certainly played well, especially in quiet moments.

Lianna Haroutounian and Brandon Jovanovich will be Butterfly and Pinkerton at the performances of March 4 and 7.