I’ve heard starrier performances, but none that made a more powerful case for this masterwork. 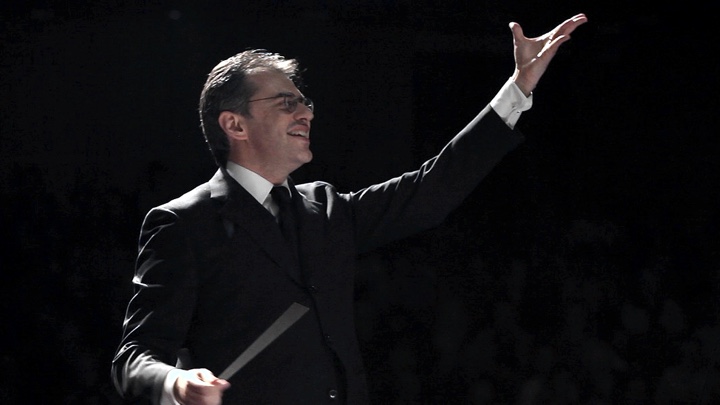 One glimpse inside Philadelphia’s Academy of Music and any hint of disappointment that Opera Philadelphia’s latest show was a concert Verdi Requiem rather than a staged theater piece vanished instantly.

The large stage, fitted out with a flattering acoustic shell, was teeming with people—between the orchestra and chorus (and, minutes later, conductor Corrado Rovaris and four soloists), the forces numbered 100-plus. If this was an attempt at economy, it was a pretty luxurious one.

More to the point, the orchestra and chorus—and, of course, Maestro Rovaris, who is also Opera Philadelphia’s Music Director—have been heroes in a dramatic resurgence of the company within the last decade. While audiences catch glimpses of them in opera performances, it seemed fitting that we could now acknowledge them front-and-center.

In my own small way, I’ll do the same and pay particular tribute to timpanist Martha Hitchins and percussionist Ralph Sorrentino—these two are key players in the Verdi Requiem, and they thrillingly knocked it out of the park.

Well, really—everybody did. This was inspired music-making to a degree that, frankly, surprised me. I’ve heard starrier Requiem performances, both in the concert hall and certainly on record, but none that made a more cohesive, powerful case for this masterwork. Rovaris also brought some intriguingly personal touches to his Requiem. Two among many—the quickening pace near the close of the “Recordare” duet and, similarly, considerable tempo contrasts within “Libera Me.”

Sublime as the Requiem is, it’s surprisingly difficult to bring off as a totality. For starters, will it be treated with operatic Italianate sweep or as a somber piece liturgical music? Either approach can work, but in practice, mixing the two is usually satisfying only in parts.

In live performances I’ve seen, I have vivid memories of specific sections—Renata Scotto’s unforgettable “Libera Me” with Giulini and the Los Angeles Philharmonic, for example—while feeling that the whole of Requiem wasn’t persuasive.

Rovaris and his forces, on the other hand, made their Requiem an overpowering musical… and yes, theatrical… statement. For starters, I’ve never heard every word of the text articulated so clearly by both soloists and chorus. Some of that is the Academy’s acoustic (often unfairly dissed), but more of it is the sense of overall commitment.

This was very present in the soloists as well. For me, tenor Evan LeRoy Johnson stood out in particular, launching the hushed, ardent “Hostias” with a stream of golden tone. Johnson, a recent Curtis grad, will probably not go into heavy Verdi opera repertoire anytime soon, but he was ideal for this.

So was Jennifer Johnson Cano (replacing the indisposed Daniela Mack), whose beautifully rounded mezzo wouldn’t be a perfect fit for Amneris or Eboli. But she easily mastered the large range and was especially good in matching voices within the ensemble.

In-Sung Sim brought gravitas, strong line, and superbly crisp diction to the bass solos. Soprano Leah Crocetto—whose repertoire includes Aida, Leonora in Trovatore, and similar—is the closest of the four to embodying the traditional operatic approach to the Requiem. Her vibrant soprano, marvelously exciting at full throttle, didn’t always ideally navigate the quieter passages, but she, too, functioned well as an ensemble player.

But again—it was the totality of the vision that made Opera Philadelphia’s Verdi Requiem such an overpowering achievement. The 85 minutes seem to pass in the blink of an eye.

A week earlier, I had attended the Met’s Damnation de Faust, and I couldn’t help but make comparisons. In both cases, we had an opera company presenting a work through a concert performance.

For Damnation—a generic hybrid—the Met offered a curious semi-staging, with the orchestra in the pit but the chorus centrally on risers, and a few awkward attempts at blocking for the three soloists. The result was, to my mind, dramatically inert and—despite some musical strengths—disappointing.

On the other hand, Opera Philadelphia’s Verdi Requiem, presented purely as a concert, was full of drama. Odd is this may sound, it was a Requiem brimming with life.