The opera’s radical vision lay in its enormous scale, which encompassed a hundred-strong community chorus taken from the ranks of the Brooklyn Youth Chorus and Master Voices. 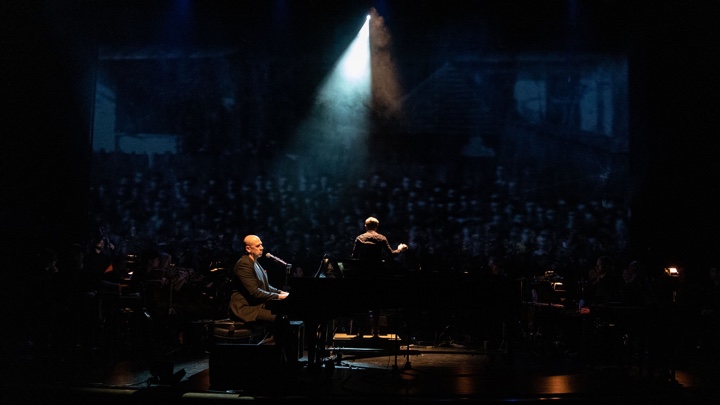 The Prototype Festival has established itself as the site of some of New York’s most daring operatic ventures. Saturday night’s performance of Iron and Coal at the Gerald W. Lynch Theater was no different.

The music of Iron and Coal was not particularly radical, and audiences hoping for new sonic experiences would be best to look elsewhere on the Festival’s program.

This came as no surprise. The work was billed as a “rock opera”. It was more like an oratorio-cum-pop concert, with the performers more-or-less stationary throughout.

Most of the action was provided by Japhy Weideman’s high-gloss lighting design and Thomas Seltzer’s animations, projected widescreen on a gauze stretching the entire breadth of the stage.

Iron and Coal is based on a concept album by singer-songwriter Jeremy Schonfeld, who was also the show’s protagonist, parked, front and center, at a grand piano. Schonfeld’s album is semi-autobiographical, telling the story of his father, who, having been, imprisoned at Auschwitz in 1944, relocated to the United States after the liberation.

Schonfeld’s musical style lay somewhere between Jason Robert Brown and Andrew Lloyd Webber, walking a fine line between Broadway and Top 40. The tunes were sweet and memorable: a grungy back-beat number, “Save Me”, which alternated between seven- and six-beat grooves, called to mind the funkiest excesses of Jesus Christ Superstar, while another number, “Stop, Stop”, hinted at ‘90s hip hop.

However, Schonfeld’s bread and butter was the power ballad. And this opera had many – countless lilting, heartfelt melodies which surged into big, belted climaxes. Schonfeld crooned these numbers in broad, soulful tones, accompanying himself on the keys with a bright, Liberace touch.

But it was not Schonfeld’s music that made this project so daring; rather, the opera’s radical vision lay in its enormous scale, which encompassed a hundred-strong community chorus taken from the ranks of the Brooklyn Youth Chorus and Master Voices.

New opera is often confined to the indie scene, usually seen in hard-hitting, small-scale productions in intimate venues. Yet I have always believed that new works have the potential to reach far beyond the regular opera-going public, and on a much broader scale.

Composers are able to write works carefully tailored to engaging local community groups: vocal parts can be custom-written for nonprofessional voices and subject matter can be chosen to speak directly to contemporary issues.

Iron and Coal has done precisely this. Saturday night’s performance evinced the potential for new opera to function as a radical participatory platform, as a means of bringing people together around an aesthetic and political project.

I applaud Prototype Festival and Beth Morrison Projects (who commissioned the work with the Strathmore Center in Maryland) for seeing so much potential in (and taking such a financial risk on) such a wide-reaching artistic venture.

It was heartening to see so many New Yorkers from so many walks of life involved in bringing this work to life. Indeed, Iron and Coal demonstrated that new opera has the potential to instigate an important communal dialogue around such urgent issues as the immigrant experience, inter-generational trauma, and the complex politics of identity.

Perhaps more specifically, it showed how opera might bring people from all faiths and backgrounds together to remember and reflect on the Holocaust at a time when Holocaust denial among young people is becoming all the more prevalent.

And the chorus itself sounded superb. They didn’t achieve a blended choral sound in the traditional sense, but the performance was all the better for it. Individual vocal timbres textured the collective sound, creating a charming sonic patchwork well-suited to Schonfeld’s hybrid score.

Sadly, the scrim which displayed the animations was positioned (bizarrely) in front of the chorus, almost completely obscuring them from view. Whether this was an intentional artistic decision or due to space considerations, it lessened the impact of their music and meant that the splashes of choreography from director Kevin Newbury were difficult to pick out.

These voices were accompanied by the New York-based new music ensemble Contemporaneous, who played the role of both chamber orchestra and rock band. They were conducted by the work’s arranger, David Bloom, who was an animated onstage presence throughout. Bloom did an impressive job of rallying such large forces, although his arrangements often favored orchestral wash at the expense of textural clarity.

Two supporting soloists, Daniel Rowan and Rinde Eckert, playing Schonfeld’s father as a teenager and as an old man respectively, flanked Schonfeld at the front of the stage. Eckert read excerpts from Schonfeld’s father’s memories – peppered in between the various songs – and occasionally lent his forceful belt and tender falsetto to the musical numbers. Rowan sang with Ben-Platt straight tones in the more lyrical numbers, but often sounded strained when the music rose in intensity.

The memoire readings were often more touching than the songs themselves, eloquently written and delivered with wit and humility. The vagueness (and occasional vapidness) of Schonfeld’s lyrics inhibited emotional impact, while the aggressive rhyme schemes (“I erased you from my mind; Left you all behind; Guess who pressed rewind?” etc.) frequently distracted from the work’s message.

Indeed, Iron and Coal wore its origins as a rock album all too glaringly. The opera suffered from a lack of continuity and, consequently, a dearth of dramatic tension. The specificity of the memoire excerpts was undermined by song upon song of lyrical banalities. The whole opera felt more like a hodgepodge of various and sundry rock songs, lumped together without an overlying emotional thread.

Certainly, there are many contemporary works which eschew drama or plot, but these works often make up for it either with visual spectacle (see the Met’s recent Akhnaten) or musical interest (as in Kate Soper’s virtuosic masterpiece, Ipsa Dixit). Iron and Coal had neither.

An unfortunate consequence of this lack of continuity was that the opera seemed at least five songs too long. The entire work was only 90 minutes in duration, but at about the 45-minute mark I became weary of unceasingly slew of musical numbers, which sounded less and less distinct as the opera progressed. After about an hour, every number began to feel like the closing number, and I was continually disappointed when another song would follow on.

Schonfeld’s unique brand of musical schmaltz, which tugged tentatively on the heartstrings early in the opera, was simply not sustainable over an operatic time scale. I came to wish that Iron and Coal had been cut down and paired with another new work on a similar theme, perhaps featuring the orchestra or chorus alone.

One of the prevailing reasons that Iron and Coal became so monotonous was the overwhelming presence of Schonfeld himself at every level of the work. On top penning both music and lyrics, his voice dominated every song and his piano playing was mixed louder than the orchestra and the choir combined.

Iron and Coal is (understandably) a deeply personal project for Schonfeld, and he performed it with passion and flair. However, one of the wonderful things about opera as an artform – which sets it apart from, say, a singer-songwriter’s album – is the plurality of authorial voices which underpin it. Even in an opera that is dominated by a single performer – let’s take Schoenberg’s Erwartung as a particularly extreme example – if you don’t like the diva, you can still enjoy Schoenberg’s score, or Pappenheim’s libretto, or the orchestra, or, at worst, simply admire the mise en scène.

Iron and Coal denied its audiences the alchemy that comes with such variegated interactions. Those rare moments when Schonfeld wasn’t playing or singing offered refreshing moments of color and clarity.

The soft pizzicato strings which opened the song “If Ever”, for instance, finally showcased musicians who had been playing almost inaudibly for the large duration of the show. The choir also felt underutilized. For me, they were the most exciting part of this project, and they sounded gorgeous when singing a cappella, yet were poorly mic-ed and undermixed in the ensembles.

Although the songs may have been a tad hackneyed and the division of musical labor a tad skewed, the democratic ethos of Iron and Coal still shone through on Saturday night, crowning another successful Prototype season.