Whether Lyric Opera of Chicago is an appropriate venue for such an intimate, gentle show as The Light in the Piazza is a subject of much critical debate. 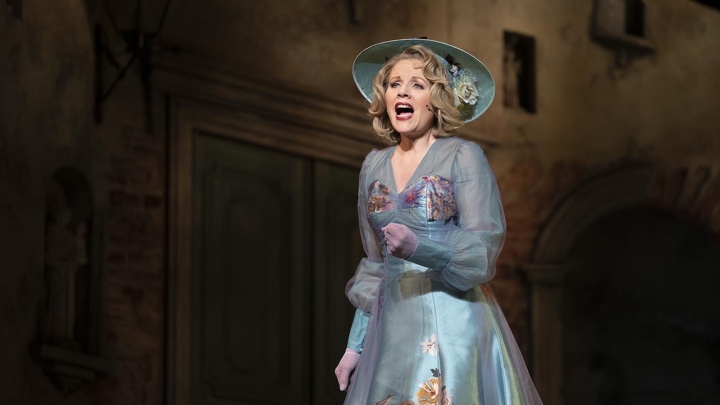 There seems to be a widespread (mistaken) belief that Lyric Opera of Chicago is responsible for the elegant production of Craig Lucas and Adam Guettel’s The Light in the Piazza that opened Saturday for a two-week “holiday run” at the Lyric Opera House. In fact, the production is from Scenario Two, a new UK company led by John Berry and Anthony Lilley. It had successful runs in London and Los Angeles before its arrival in Chicago, where Lyric Opera is hosting it in its huge auditorium. Whether this is an appropriate venue for such an intimate, gentle show as The Light in the Piazza is a subject of much critical debate.

While it still packs an emotional punch, the production feels slightly distanced from the audience. From my seat in Row W of the Orchestra, facial expressions were hard to read except when the cast was downstage, facing front, making the storytelling general rather than specific. I also found the song lyrics frequently incomprehensible especially in the ensemble numbers.

When the crowd burst on stage during the opening number “Statues and Stories,” there was so much going on that I understood none of the lyrics and wasn’t sure where to place my focus. The spoken dialogue was always clear, but lyrics could have used more final consonants. Interestingly, the lyrics in Italian were much clearer than the ones in English. As my companion remarked, “I wish we had the supertitles.”

It is a tribute to this production that it managed to overcome these difficulties, thanks to a splendid cast that beautifully conveyed the heartfelt pleasures of the story. We are first introduced to a North Carolina housewife, Margaret Johnson, who is taking her adult daughter Clara on a grand tour of Italy, starting in Florence. Life becomes complicated when a young Italian, Fabricio Naccarelli, meets and falls head over heels in love with Clara and, despite Margaret’s efforts to get Clara away from him, the two become a couple and are taken to meet the extended Naccarelli family.

We soon learn Clara’s “secret”: Margaret explains that she is overprotective of Clara because she was brain-damaged in an accident, and doctors are unsure if she’ll ever be able to develop mentally as she has physically. In order to flee Fabricio, Margaret drags Clara off to Rome where the unhappy girl demands to be allowed to love and not be smothered by her parents. Margaret, reeling from the realization that her own marriage is emotionally vacant, allows Clara to marry Fabricio. After several false starts, the pair are married as the musical ends.

The book by Lucas is quite emotionally and intellectually rich, dealing with issues of parenting, coming of age, marriage and family ties. Guettel’s lushly romantic score perfectly reflects the emotional landscape of the story, and, while there’s no real “show-stopper” song, there are great musical pleasures to be had in Margaret’s “Dividing Day” and “Fable,” as well as Clara’s title song “The Light in the Piazza.”

The best news here is that Renée Fleming has seemingly found the perfect character in Margaret Johnson. Her singing is exemplary throughout (she has no diction problem), her rich soprano caressing each phrase. Fleming also surprised with the power of her lower register. But above all, Fleming’s dramatic commitment was solid and unwavering, creating a character with real depth and empathy. This was a first-rate acting job, making Fleming’s transition into operetta and musical theatre seem like a natural.

The entire Naccarelli family was delightfully played. Rob Houchen was a dynamo as Fabricio, bringing great heart and passion to the role and its roller coaster of emotion. His meltingly beautiful tenor was employed with ease and fluidity throughout, most notably in his simple, moving song “Love To Me” as he persuades Clara to join him in the church. British veteran Alex Jennings is excellent as the sardonic father of the family, and Marie McLaughlin was delightful as the non-English speaking mother. Suzanne Kantorski brought genuine pathos to her role as Fabricio’s cynical sister-in-law and Eric Sciotto (quite a dancer, by the way) very fine as her rakish husband, Fabricio’s brother Giuseppe.

This brings me to the pivotal role of Clara, played by Solea Pfeiffer. She certainly “gets” the character—her innocence, stubbornness, and charm. She sings well, especially in quieter moments. In her more emotional songs, the high voice turns shrill and the lyrics are lost. When Clara has her tantrum in “Clara’s Tirade”, the lyrics completely disappeared into a general anger. I couldn’t figure out what she was so mad about! Nevertheless, Pfeiffer delivered some truly touching moments and she had excellent chemistry with the charming and impetuous Fabricio of Houchen.

Malcolm Sinclair made a fine foil as Margaret’s absent husband Roy, also touching as Margaret makes him face the fact that their marriage is failing.

Kimberly Grigsby led 30 members of the Lyric Opera Orchestra in a sensitive reading of the score, highlighting both the sensuous and romantic aspects of the music, particularly with the strings and piano.

The actual light in the pizza is almost another character in the piece, and here it is well served by Mark Henderson’s warm and romantic design. I loved Robert Jones’ Italian plaza settings, especially for the outdoor scenes, but the huge naked statue stage right was something of a distraction, especially when we saw his backside in Florence that was turned to the front for Rome and back to the butt for the final scenes.

Brigitte Reiffenstuel excelled at her character-appropriate costumes, especially the colorful suits that looked great on Ms. Fleming. I thought Daniel Evans’ direction only spottily effective, but it must be said that the overall arc of the story came through loud and clear.

The run continues at the Lyric Opera House through December 29. It’s well worth a visit.