Jagged Little Pill is as manicured as the kind of Stepfordian society the material supposedly rails against. 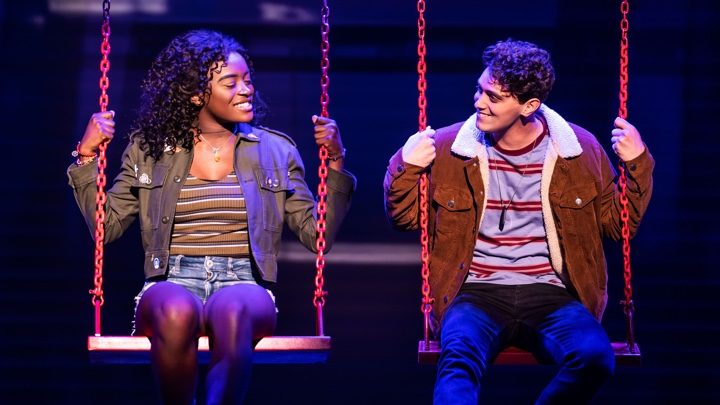 Cameron Kelsall: Isn’t it ironic, David, that we’re the ones tasked with reviewing Jagged Little Pill, the new musical employing songs from Alanis Morissette’s landmark album of the same name? Don’t you think? Even though we’re some years apart in age, I’d venture to say neither of us is the target demographic for this show.

David Fox: How you know you’re old: I had (embarrassing admission) never heard of Jagged Little Pill. I just assumed it was something the young’uns all knew. Don’t worry, I’ve now done my homework — but in the process, I learned that it’s not a kids’ thing at all; it’s now nearly 25 years old, iconic for people who are now 40-plus… which is pretty much what I was when the Morissette album came out. Oh, dear. Anyway, now — thanks to Spotify, Wikipedia, and Google — I’m totally au courant with… 1995.

CK: I was seven years old when JLP came out, so it largely passed me by in the moment. My knowledge of it from that period is mostly refracted through my Gen X brother and his MTV-watching friends, many of whom could quote the lyrics to “You Oughta Know” or “Hand in My Pocket” at the drop of a hat. I’m too young to be nostalgic for that time. When I finally got around to listening, I found it skillful and well produced. There’s no denying Morissette’s idiosyncratic appeal as a singer-songwriter, and there’s something refreshingly raw and personal about the music on a whole.

DF: When I listened to JLP — start to finish, without stopping — I was immediately won over. Yes, today some of it comes across like a period piece. But the distinctiveness and imagination remain genuinely fresh. I love Morisette’s voice in both senses — as a remarkable musical instrument, but also a social commentator, at once wry, angry, and funny. But — I couldn’t imagine how the album could possibly become a musical, assigning songs that so clearly belonged to this unique artist to a cast of singer/actors. Having seen the show, I still can’t.

Frankie is also a transracial adoptee, raised in almost-entirely white town where few if any of her peers look like her. And without revealing too much, a major plot-point also introduces the #MeToo movement and questions of economic privilege. Without a doubt, this is the most self-consciously woke musical in the history of Broadway; every scene could come with its own hashtag. 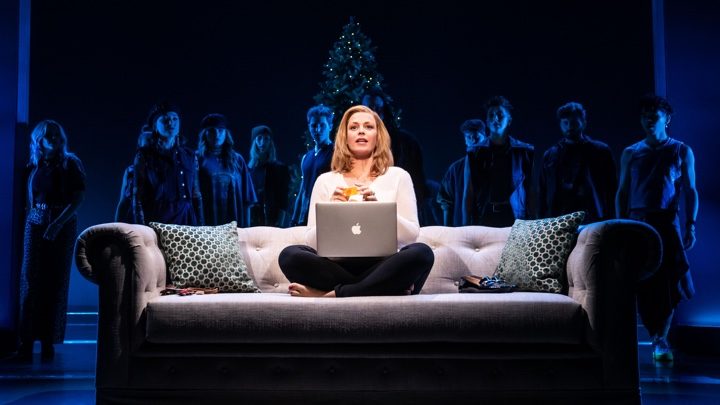 DF: But on the other hand, some of the family scenes look borrowed from Desperate Housewives! Don’t even get me started on Diablo Cody. Yesterday’s hipster is today’s sitcom centrist, as an embarrassingly trite classroom scene early on clearly illustrates.

CK: Totally. Also, that scene — and many others — are staged with head-spinning freneticism by director Diane Paulus and choreographer Sidi Larbi Cherkaoui. I don’t mean to knock the show’s large ensemble, since they are often its best feature. But this is something I’ve noticed in several Paulus-staged musicals (especially Waitress and her circus-themed revisal of Pippin): No one is ever allowed to have a quiet, introspective moment. That might work for a giant, impersonal juggernaut, but it seems completely out of place for a piece that’s trying to portray inner anguish and feelings of isolation.

DF: And I’m sorry to say that slickness spills over into the performances. All four of the principal cast members playing the family — Stanley, Gooding, Krill, and Klena — give highly polished performances that get the job done, but to me register with no specialness at all. For that, you need to turn to several of the featured actors. Antonio Cipriano (as Phoenix, Frankie’s sometime boyfriend) is charming and has a terrific voice. Lauren Patten (Jo, a lesbian also sometimes involved with Frankie) is a vocal powerhouse. And particularly Kathryn Gallagher, whose angsty turn actually feels a real person, in a way the others don’t.

CK: I particularly liked how Gallagher was able to wrest a role that is essentially one giant girl-from-the-wrong-side-of-the-tracks cliché from the jaws of predictability through simple, unflinchingly honest acting choices. She’s a captivating performer, a name I expect we’ll see quite often in the years to come. But it says something that the people we’re actually meant to care about so often fade into the background of their own story.

DF: A word we haven’t used yet, but really fits here — authenticity. Gallagher has it, but it’s otherwise largely absent from JLP in every sense, including its conception. Watching the show, I kept remembering William Goldman’s perceptive chapter on Hair in his book, The Season—how the more “Broadway” Hair became, the more diluted and toothless it was.

CK: Bingo. Morissette’s original album exudes authenticity — it’s the work of a 21-year-old artist unafraid to wear every last feeling on her sleeve. The musical it has become, on the other hand, is as manicured as the kind of Stepfordian society the material supposedly rails against. (The show is set in a wealthy Connecticut enclave, natch.) Even when it tries to get messy, it remains elegant; in a protest scene late in the second act, the “handmade” signs the crowd-members carry look so pristine they might have come off a museum wall. 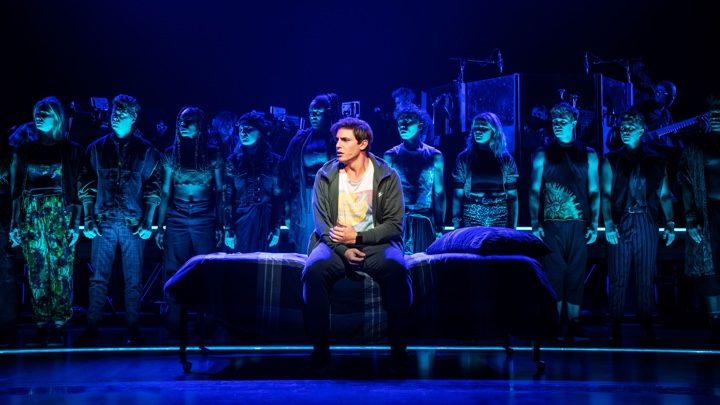 DF: Pristine and unconvincing, too, are the “teenagers,” all of whom look at least 25. When one of the characters questioned how they had “missed out on the essential high school experience,” I thought maybe they’d forgotten about it since it was at least a decade earlier.

CK: The audience at the performance didn’t seem to mind the 28-year-old teens and their 35-year-old parents though, did they? In fact, their reactions seemed to grow more visceral as the material became more nakedly didactic.

DF: Indeed. Moment after moment in Act II had the crowd cheering, as the cast came directly to the footlights in brash, almost haranguing poses of protest. But what does it mean to applaud this? Are we jumping on board to endorse JLP’s “épater le bourgeois” message? But if so, we’re also rewarding a bloated Broadway extravaganza (premium tickets top out at $400, by the way—face value is a mere $179) that could itself hardly be more bougie.

Now that’s what I call “Ironic.” For me, the final insult is the last scene, a mawkish Christmas tableau that traffics in the worst kind of recovery-speak platitudes (Actual line: “You need to learn to actively participate in each other’s healing.”)  We were, of course, watching this during the holiday season, and all I could think of was I hope to God that this turkey closes before the Feast of the Epiphany.