It's not difficult to make an audience weep uncontrollably. But because it’s so easy, I think artists have a responsibility to not overuse that power. 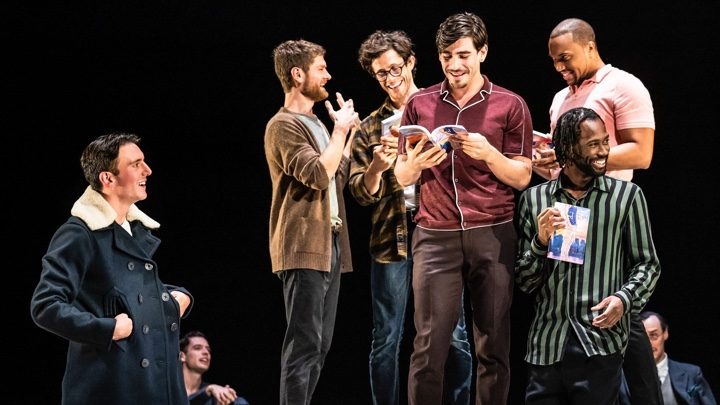 David Fox: One might as well begin with The Inheritance, Matthew Lopez’s gay fantasia on Howards End, which we saw last Wednesday. Not exactly the way everyone would like to spend the day before Thanksgiving, but somehow suitable for us, don’t you think, Cameron?

Cameron Kelsall: Well, the majority of Americans find themselves sitting in bumper-to-bumper traffic on that day, inching ever closer to fractious family gatherings where they hope their Fox-watching uncles won’t bring up Trump. I’ve always thought people who would put themselves in that position must have a latent masochistic streak. But since you and I decided to spend our pre-holiday day off at a seven-hour, two-part play about the bleak history of HIV/AIDS in the gay community, do we really have the right to judge anyone else’s choices?

DF: Together, we should be the demographers’ dream audience for The Inheritance. I’m a 63-year-old gay man, and therefore was in my early thirties when AIDS escalated to crisis level. I lost several very close friends in those dark days. You are more than three decades younger—post-crisis, as we might put it. These are central ideas in Lopez’s epic (in terms of length, at least) play. Yet, I’m also uncomfortable with this binary, over-simplified way of thinking—something I frankly feel is also a more general problem in the show.

CK: Agreed. Let’s just say that the level of depth doesn’t quite equal its breadth. The intergenerational conversation about HIV/AIDS largely comes down to finger-wagging and mawkishness from the older characters (OK boomer, I thought repeatedly) and blithe indifference from the millennial cohort. Neither faction is shown in its best light.

DF: Yes, and yes. But before going too far down that road, I’ll briefly and uncharacteristically play Pollyanna and say that I did indeed find much about The Inheritance well-crafted, and—more importantly—moving. I previously knew Lopez only through The Legend of Georgia McBride, which I dismissed as Drag for Bachelorette Parties. This play shows far more sensitivity to the subject, and certainly a gift for theatrical orchestration on a grand scale. The multiple-voice conversations are handled with real skill, and Lopez also shows a keen interest in history and perspective.

CK: Georgia McBride indeed felt like Drag 101. But much of The Inheritance to me felt like Gay History 101. I guess I’m going to be the skunk at the garden party, but it also strikes me as tone-deaf that this play filters the gay experience almost exclusively through the lens of wealthy, attractive white cis men, while largely ignoring the ways the epidemic has continued in communities of color and among other marginalized populations. 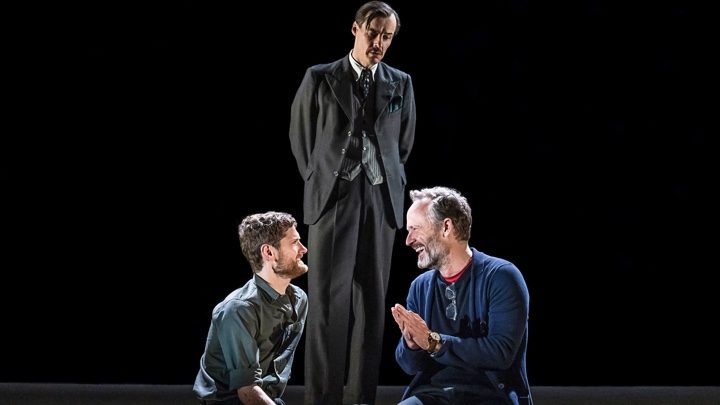 DF: Not only mostly white, but unbelievably attractive and hunky. (I mean, when dreamboat Kyle Soller is playing Eric Glass, who seems to be identified as the “plain but nice” one, you know you’re in Fantasyland.) And not only hunky, but extravagantly acquisitive. I almost didn’t make it through the first scene, a summer getaway that name checks a catalog of luxury: The Hamptons? Check. Martinis? Check. Infinity pool? Check.

CK: Meanwhile, one in two gay Black men will be diagnosed with HIV in his lifetime. Although there are several performers of color in the cast—including one character (Tristan, played by Jordan Barbour) who is explicitly presented as positive—their stories are entirely relegated to the periphery. These characters offer sound bites that the white central characters acknowledge but never absorb.

DF: In a long and very powerful monologue, Eric passionately exhorts us to remember the past. Well, for me that also means remembering the history of theater. The Inheritance, both as writing and staging, stands on the shoulders of people and works that aren’t adequately acknowledged. I don’t mean Howards End, which of course is quintessentially present throughout, including having E. M Forster as an onstage narrator (here called “Morgan”), a conceit I frankly found arch, despite Paul Hilton’s fine performance. I’m thinking more of Tony Kushner’s epic Angels in America, which in size, scope, and often content is clearly a huge influence here. Also, Craig Lucas’ and Norman Rene’s film, Longtime Companion…

CK: The final scene of part one is so nakedly lifted from Longtime Companion that I half-expected “Post-Mortem Bar” to start playing over the Barrymore Theatre’s sound system. And it’s just as emotionally manipulative.

DF: You know, I saw Longtime Companion when it first opened, at the height of the crisis—yup, OK Boomer, I’m owning it—and I vividly remember saying to my friend that under the circumstances, it’s not difficult to make an audience weep uncontrollably. But because it’s so easy, I think artists have a responsibility to not overuse that power—and I’m not convinced that Lopez isn’t doing just that. And the production’s mournful cancer-movie style soundtrack (by Paul Englishby) compounds it.

CK: So much of the script (and production) takes the easy road toward unearned catharsis. For example, only the presence of Lois Smith—an actor as supremely unsentimental and grounded as they come—keeps an eleventh-hour plot twist from turning fully bathetic. Smith plays a woman who has devoted her life to easing the suffering of dying gay men after rejecting her own son—cue the violins—and momentarily, you can glimpse a level of poise and restraint that’s been missing from almost everything that came before. 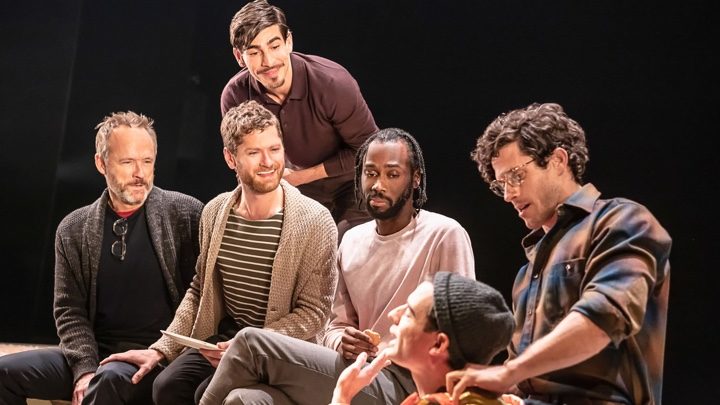 DF: I certainly love me some Lois Smith, and if her very touching work here wins her the Tony Award she has long deserved, that will in itself be a reason to celebrate The Inheritance. But I also can’t help but point out that this whole sequence—and Smith’s character of Margaret—seems another piece of unacknowledged (by Lopez) history: Ruth Coker Burks, a real-life hero whose valiant, extraordinary story brought me to tears far more than its fictional parallel here. (Google “Burks,” if you don’t know her.)

CK: We’ve been pretty hard on this play—and with good reason—but as this review enters the home stretch, I want to acknowledge that the production is quite well acted. The previously mentioned Kyle Soller is an immensely likeable performer, which helps a lot when you’re the focal point of a multi-hour endeavor. Not to get up on my gay high horse—who am I kidding? The view’s great—but Soller is straight, and he occasionally overdoes some stereotypical gay mannerisms. Still, he’s far better than Andrew Burnap, who plays every cliché of self-destructive faggotry as Toby Darling, Eric’s tortured-artist boyfriend.

DF: I also thought John Benjamin Hickey was terrific in a basically unsympathetic role, and maybe the standout for me is Samuel H. Levine in paired roles. (And yes—another hottie.) I also admired the elegantly streamlined beauty of Stephen Daldry’s production (my, Daldry does like his model houses, doesn’t he?) and Bob Crowley’s scenery.

CK: Levine truly struck me as the production’s discovery—expect to see his name come awards season. (For the Forsterites watching at home, Levine’s Leo is a composite of Leonard Bast and his wife Jacky, so basically every misfortune befalls him over the course of the play.)

DF: I wonder if the ecstatic reviews of show’s premiere run at the Young Vic ultimately did it a disservice, setting it up for disappointment here? Honestly, though I think nearly seven hours of The Inheritance is at least twice as much as necessary, much of it is gripping and often quite funny.

CK: I don’t wholly disagree, although as the hours wore on, it started to feel like diminishing returns. Or maybe I was just tired. Either way, I’ll see you on Christmas Eve for a screening of Shoah.