Maestro Yannick Nézet-Séguin, always with a gift for gab, is ever more loquacious in concerts, often talking directly to the audience. 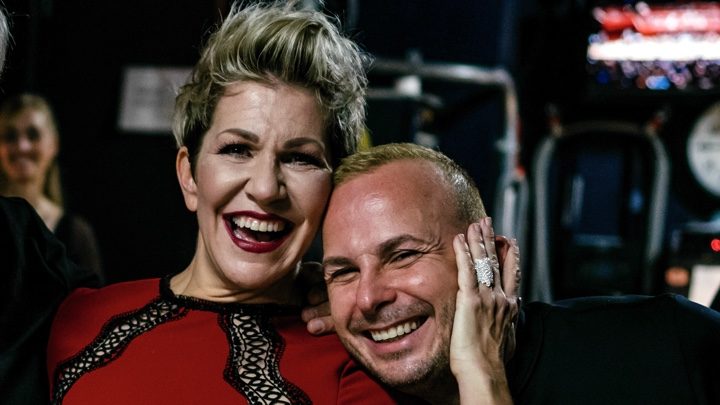 “Welcome! Bienvenue!,” a familiar voice chirps in the darkness.

No, it’s not two-thirds of the Cabaret Emcee’s opening number. It’s none other than Yannick Nézet-Séguin, heard via intercom from backstage at Verizon Hall in the Kimmel Center. The maestro, always with a gift for gab, is ever more loquacious in concerts, often talking directly to the audience. (Sometimes I think he’s his own Ed McMahon.)

In this case, Yannick himself offered the customary no-cellphones-or-recording warning—first in English, to considerable applause… then in French, to even more. The ardent love affair between our conductor and the city of Philadelphia continues at full throttle.

That’s reassuring, considering that the event in question might have otherwise raised some eyebrows. Yannick was in the Kimmel Center—the home, of course, of his Philadelphia Orchestra—to present his other ensemble, Montreal’s Orchestre Métropolitain, which recently named him conductor for life. (Of course, the energetic YNS has yet another home at the Metropolitan Opera.)

Concluding his four-concert American tour—a program of Bruckner and Mozart, the latter featuring mezzo Joyce DiDonato, a frequent partner—in Philly could be seen as a generous gesture. Or would it feel like having a favorite uncle show up with his second wife for a family Thanksgiving dinner?

The initial cheers dispelled any doubts, and YNS & OM settled in for business—the first half, devoted to La Clemenza di Tito.

From the opening notes of the overture, it was clear that OM is, indeed, a modern orchestra. Though YNS conducted with verve, point, and quite speedy tempos, the sonorities here were round, soft-edged, warm, and full of arching legato. All are very good qualities, of course—but I prefer sharper, drier textures and more sprung rhythms in my Mozart.

But with the arrival of DiDonato, suddenly it all made sense. She, too, is an artist who brings a modern—or perhaps more correctly, boldly Romantic—sensibility to Mozart’s classical structures. Her open emotionalism, bracing willingness to play with time, immense coloristic arsenal and dynamic range—these are key elements to her Mozart, thrillingly deployed here. (She also, I’m happy to say, is a stickler for appoggiaturas.)

First came Sesto’s “Parto, parto,” a performance that alone would have made the concert worthwhile. Literally every element was in sublime alignment, from Simon Aldrich’s elegantly phrased and decorated clarinet obbligato, to Yannick and the OM’s perfectly judged play of light and shade, to DiDonato’s utter immersion in the music. Her haunting pianissimi, which seemed to hang in the air, were a special plus… but no more so than the driving energy she brought to the allegro section.

In all, it was the most imaginative performance of this aria I’ve heard since a recording by Cecilia Bartoli and Nikolaus Harnoncourt redefined it for me nearly three decades ago. At its conclusion, we had the first of several standing ovations—normally, I don’t approve, but this time I was all for it.

DiDonato was similarly effective in her next selection, Vitellia’s monumental “Non più di fiori.” Nominally a soprano aria, though the low notes are a particular challenge, it was superbly met here by this mezzo; only the very top notes sounded as though she was singing at the outer limit. Again, what impressed most was the spacious, always on-the-words interpretation, ably supported by YNS and company (though I wish that Aldrich, who here also provided the obbligato on basset clarinet, had been more forward.)

Another standing ovation brought an inevitable encore—Cherubino’s “Voi che sapete,” charmingly and simply sung. The coy interaction between JDD and YNS was a bit much for me, but the crowd ate it up.

Following intermission, the program turned to the rather different challenges of Bruckner’s “Romantic” Symphony (No. 4). It was a logical, even inspired choice—together, YNS and OM have recorded the entire Bruckner symphony cycle; the composer is clearly a favorite of the maestro’s; and its virtuosic demands offer many opportunities to showcase the various sections of this fine ensemble.

I confess the piece is far from a favorite of mine—I find it repetitious and sprawling, with little sense of architecture and build. (This is, of course, a personal view—your mileage may vary, as they say.)

Still, I can still acknowledge that these Montreal forces certainly made a persuasive and sometimes thrilling case for Symphony No. 4, whether in the beautifully articulated, quietly furtive string writing, or the gigantic climactic passages that spring up rather too often.

Yet another standing ovation confirmed the program as a smashing success. Kimmel may still be home to the Philadelphia Orchestra, who rightfully feel first in their music director’s affections. But OM came, saw, and conquered… and I hope they return soon.