Darkness on the edge of town

Lyric Opera of Chicago'as Don Giovanni lands smack dab in the middle of our current debate about wanted or unwanted sexual advances and outright sexual abuse. 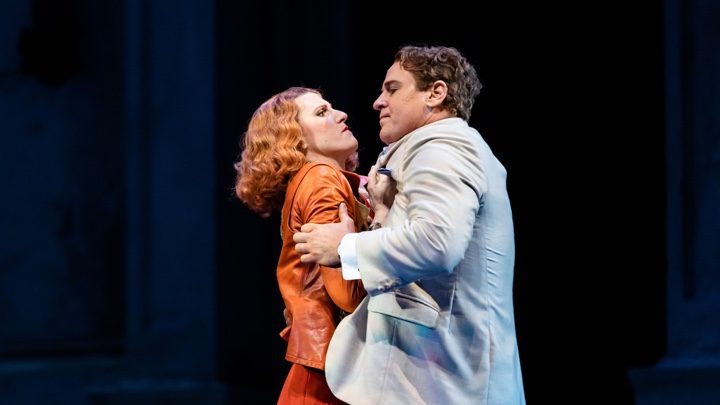 Mozart and Da Ponte’s 1787 opera is not changed in any way, but Falls’ production refuses to allow his audience to excuse Don Giovanni as a charming seducer.

Here, the Don is ruthless, cruel, and narcissistic in the tradition of Epstein, Weinstein, and a long list of others. He’s handsome and charming, yes, but completely lacks empathy for the women he seduces and discards. This makes for a particularly dark Don Giovanni, and much of the humor is blunted, though Leporello’s antics often amuse. But dark though it is, this production shines a fascinating light on aspects of love and human nature. And, happily, Falls has surrounded himself with terrific designers and a cast that brings Mozart’s rich score to exciting life.

Falls moves the action to the 1920’s in “a small village in Spain,” allowing the use of motorcycles, bicycles, and…firearms. So, when Don Giovanni pulls out a handgun and shoots the Commendatore dead in the first scene and gets away with it, I was immediately reminded of another accused sexual predator in high places. “There goes that guy on Fifth Avenue,” I thought.

The action takes place on Walt Spangler’s spectacular sets, using various stone architecture and lush, imaginative gardens surrounding them (one a remarkably huge grape arbor). When set changes are necessary, a gorgeous drop of giant black roses descends and the action continues in front of the drop, allowing for totally smooth transitions between scenes.

Also spectacular is the huge statue of the Commendatore in Act Two, Scene Four, surrounded by mounds of flowers and religious icons. Ana Kuzmanic’s costumes are beautifully realized and character-appropriate, and Duane Schuler’s lighting varies between rich color and stark white. The designs work synergistically to support Falls’ heady aspirations. 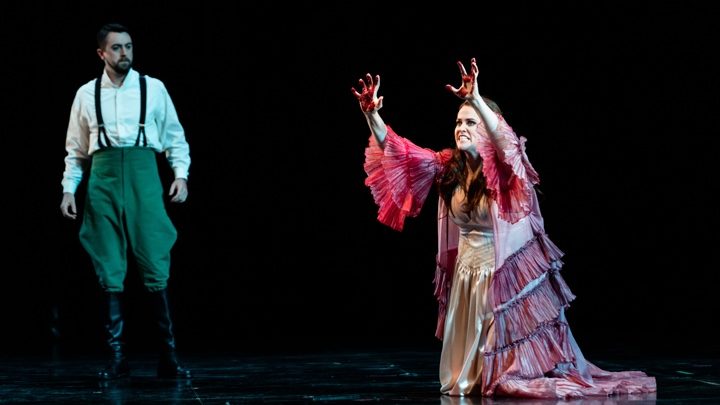 Lucas Meacham throws himself full throttle into this Don Giovanni, his expressive baritone up to the task throughout (the role will be played by Davide Luciano in the December performances). He’s a preening, self-indulgent Don, gorging himself with food and wine when he’s not in seducing mode, sharing lines of cocaine at every turn with a semi-reluctant Leporello.

At several moments he is frightening, especially in his violent beating of Masetto where he slams the poor peasant’s head into the stone wall and mercilessly kicks his hapless body. Nick Sandys’ fight direction is effective here and throughout. And at the end when he is consigned to hell, The Stone Statue tips a long table, sending the Don and table both into the pit. Meacham’s desperate attempt to climb up the table to save himself is effective and scary, another fine piece of staging by Falls.

Matthew Rose plays a particularly sleazy and pimpish Leporello, and his physical comedy is beautifully timed and executed. In this production, he is clearly Don Giovanni’s enabler in all his wretched excesses.

Soprano Rachel Willis-Sorensen makes a marvelous Lyric debut as Donna Anna. Her shimmering, silvery soprano is ideal for the delicate moments of the role, yet she has power and tonal beauty when needed. She pours forth exquisitely beautiful singing in a voice capable of many colors and nuances. Her great aria “Or sai chi l’onore” is the absolute highlight of Act One.

Amanda Majeski plays a psychologically complex Donna Elvira, singing with power, grace, and flexibility. Dressed in red with flaming red hair, she plays Elvira as obsessed with the Don, bringing yet another contemporary touch as the abuse victim perpetually returning to her abuser. 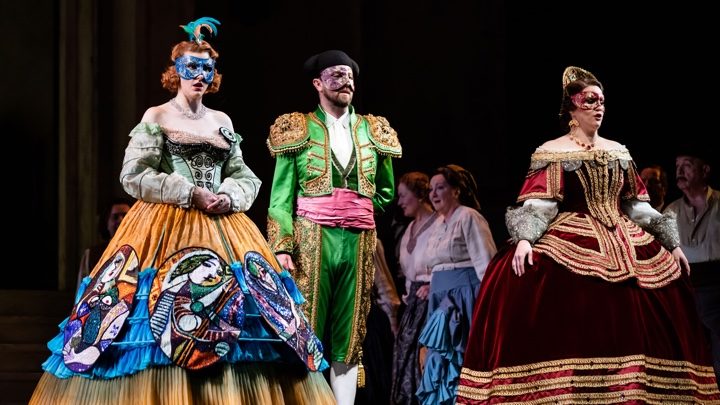 Her fiendishly difficult aria “Mi tradi quell‘alma ingrata” is sung with great emotional depth. Just before the Don is consigned to Hell, she furiously pulls out a gun and shoots him in the shoulder—another Falls touch that makes perfect sense in this production context.

Donna Anna’s much-thwarted love interest Don Ottavio is sung with limpid beauty by tenor Ben Bliss. His purity of tone and fine phrasing were ravishing in both his great arias “Dalla sua pace” and “Il mio tesoro.” I’d like to have seen a bit more dramatic commitment from Bliss, however, as his facial expression of mild pique was present throughout.

Chinese soprano Ying Fang was a delightfully charming Zerlina, singing with jewel-toned beauty. She was well matched by the unusually interesting Masetto of Brandon Cedel. Cedel is a natural actor with great stage presence and charm. This Masetto was no bumpkin, but a man of honor and worldly innocence.

This was my first hearing of the work of conductor James Gaffigan, and I was positively impressed with his lively, spirited leading of the Lyric Opera Orchestra. The Lyric Opera Chorus under Michael Black was, as always, a model of precision.

I should mention that I was seated in the second row of the Orchestra, so I had a very close view of the nuances of the singers’ acting choices and the conductor’s movement. Happily, most of them were very much ready for their close-up.