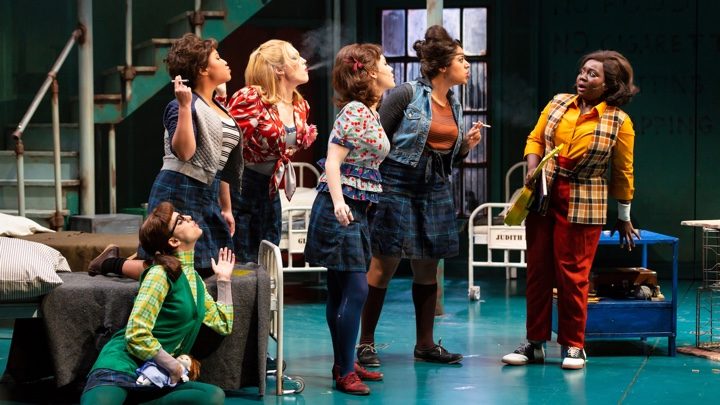 Before launching into a review of the beguiling and sometimes wonderful Love in Hate Nation, I’m thinking the oldsters among us—and I absolutely count myself in this group—might benefit from some context. (Apologies in advance if I’m underestimating your hipness).

In 2015, Be More Chill, a musical with score and lyrics by Joe Iconis, premiered at Two River Theater in Red Bank, New Jersey. What followed was, for a regional premiere, a surprising and dazzling ascent, due largely to enormous numbers of young people downloading the musical score. I didn’t know much about it, but my college-age students certainly did… and even more than that group, somewhat younger teenagers flocked to Be More Chill.

Three years later, the show landed Off-Broadway, and tickets were at almost Hamilton-level scarcity. When Be More Chill finally made it to Broadway, critical reaction was mixed and ticket sales disappointing; but the show remains an historic phenomenon.

So, it’s no surprise that Two River would once again present a new Iconis show. But Love in Hate Nation itself is a surprise, at least to me—and an often revelatory one.

To start, its subject matter—a riff on ‘60s reform school girl movies—suggests both an older audience, and a slyly satirical tone. Both are, delightfully, true, at least in part. Some (though by no means all) of Love in Hate Nation is a raucous and exhilaratingly vulgar send-up, à la Tom Eyen’s Women Behind Bars.

As for the crowd, one of the loveliest things to see at Two River’s Sunday matinee was its intergenerationality: grandparents, parents, kids, and everybody in-between. The enthusiastic response to individual numbers, and—even more—the show’s conclusion was nearly deafening.

Yet, I wager the positive reaction here has less to do with its camp aspect than with its sincerity. 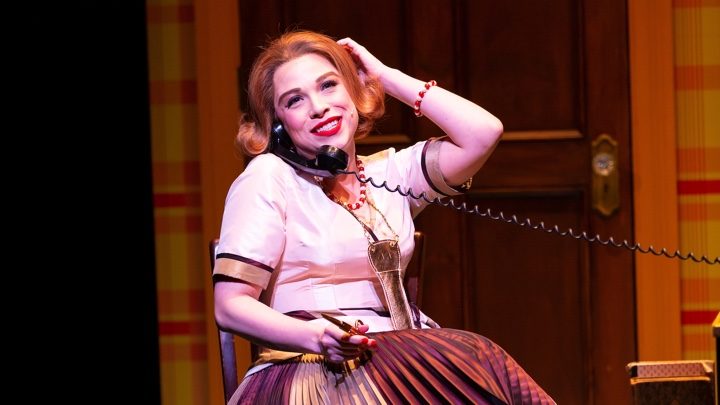 In LIHN, a young black woman called Susannah Son (a star-making performance by Amina Faye) feels like an outsider, despite all the trappings of a comfortable suburban life. After some trouble at school—and suicidal thoughts—Susannah finds herself in the National Reformatory for Girls (“Nation” for short), a sort of prison for wayward girls, run by an egomaniacal crusader called Miss Asp (Lauren Marcus, marvelous), and surrounded by a group of what Asp calls “garbage girls.”

Surprise! What seems like the worst possible outcome for Susannah turns out to be divinely life-changing. From her fellow inmates, she learns strength and confidence. Even more important, she finds love with Sheila, a Joan Jett-like charismatic rocker-chick (the fabulous Kelly McIntyre).

Messages here about individuality and diversity could hardly be more overwhelmingly, joyously positive. When I say that LIHN could be Betsy DeVos or Karen Pence’s worst nightmare, I hope you take this as the high compliment that is meant.

This is not to say that LIHN is flawless; it’s not, though at its best, the show is every bit as good as its giant heart. Iconis’s score, always tuneful and charming, rises to heights in “The Other One” and “Oh, Well,” two duets for Susannah and Sheila that resonate the best of the Elphaba / Glinda songs in Wicked, and I could imagine having similar traction.

They certainly could as delivered here, by Faye and McIntyre, with glorious blue-chip voices and charisma to burn. Astonishingly, Faye herself is still a college student! But I predict we’ll be hearing a lot more from both of them.

Elsewhere, the songs are more characteristic of the funnily snarky parody work of Marc Shaiman and Scott Wittman. It’s good, too—but it points up LIHN’s biggest problem. The show moves back-and-forth between a John Waters-y genre satire on one side, and a deeply-felt social message on the other.

Waters himself might be able to find a cohesive tone, but Iconis hasn’t… at least not yet. LIHN also drags a bit, particularly in the unnecessarily long book scenes that slow momentum. Its 2.5-hour running time should be trimmed by at least 30 minutes.

That said, the Two River production certainly showcases LIHN in style. The fine ensemble cast includes Sydney Farley, Jasmine Forsberg, Lena Skeele, Emerson Mae Smith and Tatiana Wechsler as the girls. Actor Ryan Vona assumes all the male roles, which are given broadly comedic treatment that emphasizes this is indeed a show about girls/women… and guys are usually losers.

Behind-the-scenes orchestral support, under the direction of Annastasia Victory, is first-rate.

Like the show itself, I’m taking the most positive view here of the future. LIHN had its first performances at Penn State, and I’m guessing the Two River production remains a work in progress. I believe the fixes are possible, even easy—and the possibilities for an extended afterlife almost limitless.