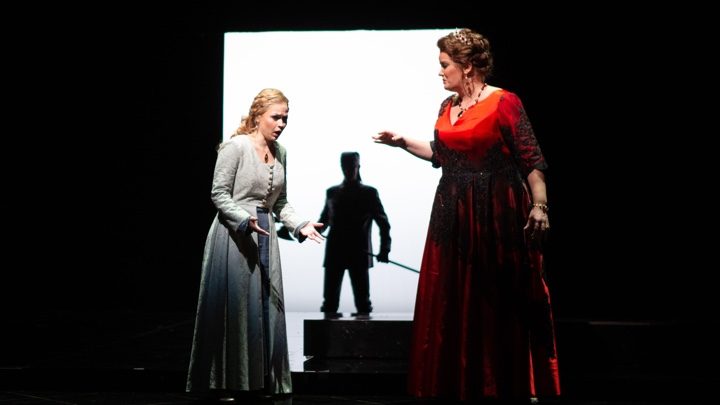 But since we are by now familiar with each of Rossini’s 40 operas (thanks to the festival in his hometown, Pesaro), and Bergamo is scraping up all seventy-odd works of homeboy Donizetti, and Bellini’s few gems gleam eternal, we, of insatiable ear, require new tuneful ores from the motherlode.

It’s time to revive their contemporaries and onetime rivals, the likes of Saverio Mercadante, the Ricci brothers, Nicola Vaccai and Giovanni Pacini to swell our hearts and pluck our heartstrings with divine ear worms.

All it requires is a sturdy and adventurous little company, an able conductor who cares about little-known scores, and singers with gifts and style and skill who have studied the proper method. And voilà! Unknown but utterly songful opera, with luscious pedigree! If your blood races at an even run to a trilled high note as audible evidence of passion or despair, bel canto is your jam.

Boston’s Huntington Theater was the place to be this past weekend for the first transatlantic performances of Pacini’s Maria, Regina d’Inghilterra.

Odyssey Opera, a company that seeks out obscure works and gives them grade A treatment, is presenting a season of works about the Tudors, a dynasty much beloved by bel canto composers who seldom set foot in England. Other composers whose operas will be presented—the season opened with Saint-Saëns’ extraordinary Henry VIII—include Arnold Rosner (a world premiere), Benjamin Britten and Arthur Sullivan’s protégé, Edward German.

But for bel canto enthusiasts, there are Pacini and, coming up in March, Rossini’s Elisabetta, Regina d’Inghilterra, which has just about the same plot as Maria, but with a different heartbroken queen and a happier ending. Both these operas have something to do with Sir Walter Scott, popular all over Europe in his day, and nothing much to do with history. 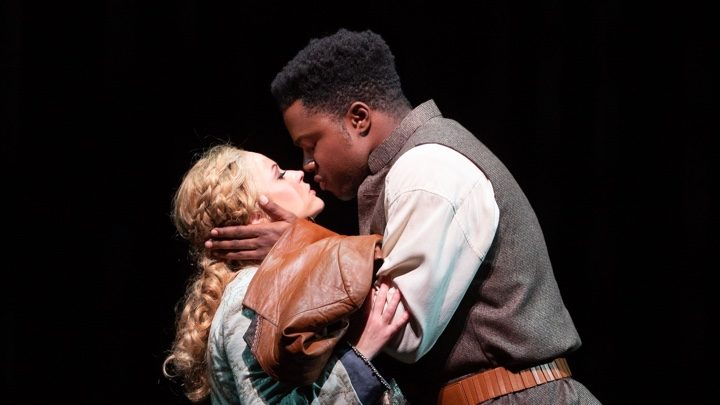 Maria has five big roles, and we don’t meet our titular prima donna until Act II, by which time we know (or think we know) all the others. There’s an orphan torn by her love for two men, one low-born and honest, the other a cheatin’ cad. The queen, however, is also in love with a cad—in fact, the same one. Surprised?

The bass is a politician determined to expose the cad—so that he can rule the queen. Whom can she trust? While all this doesn’t actually make for suspense—there was giggling—it does set up tuneful confrontations. In ottocento opera, confrontations and cross purposes are always a good thing.

Pacini was born in Catania in 1796, in the same magic decade—half a decade, actually—that produced Rossini, Mercadante and Donizetti. (Bellini showed up at the century’s turn.) Pacini won his first fame in the 1820s, after Rossini left for Paris, especially for his melodious cabalettas and urgent strette. But after the triumphs of Bellini, Pacini gave up the stage.

But then Bellini died, and Donizetti left for Paris. It was time to retool, and Pacini’s new style of the 1840s earned him new triumphs. Except there was this kid named Verdi around, with a blood-and-thunder energy and way of utilizing the orchestra. The younger generation wanted to hear the noise. Pacini faded, though he was always game when one of Italy’s thousand opera houses wanted a world premiere. He died in 1867, but new Pacini operas continued to appear.

Maria, Regina d’Inghilterra premiered in Palermo in 1843. Pacini was paying no attention to Verdi with his thundering nationalistic choruses. Maria sounds like the composers of the dying age—or perhaps they had sounded like Pacini all along.

Act I concludes with an irresistible martial duet for two angry men—did Pacini know I Puritani? Of course he did. In Act II, there’s a duet for two sopranos betrayed by the same tenor. They harmonize beautifully. Did Pacini know Norma and Donizetti’s Maria Padilla? Almost certainly. In Act III, before the tenor’s aria of repentance, there’s a clarinet obbligato—did Pacini know Saffo? Since he had composed it three years earlier, we may suppose he did. (Ah, but did Verdi remember it when he composed Forza twenty years later?) 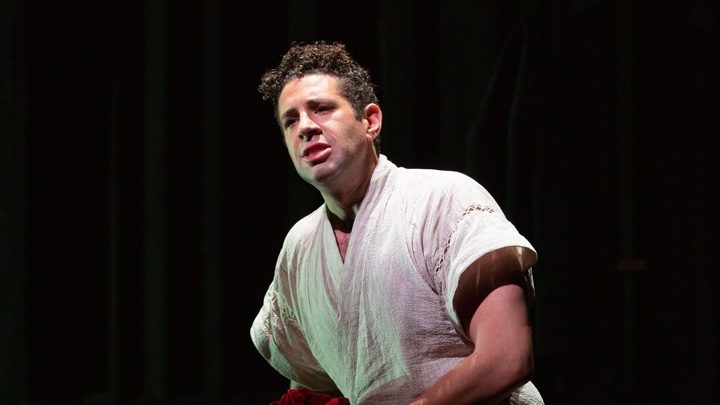 But Pacini was most famous for his concertati, the numbers that end an inner act with everyone on stage, shocked, furious, embarrassed, delighted. The scene that stopped the giggles last Friday was the finale to Act II (the queen confronts her lover with evidence of his perfidy), when everyone sang at once (syllables of choral shock, pizzicato, in the background). We had enjoyed the singing all night; now came the knockout punch. The theater sat up, all a-grin.

Gil Rose, the maestro of Odyssey Opera, has observed that young singers today are better skilled, and better schooled, in a pre-Verismo technique for which, fifty years ago when these operas were first returning to vogue, there was little market.

It struck me throughout this performance that a bel canto evenness of line, a gracious sweetness of utterance from top to bottom and fully engaged diaphragmatic support, were features of the singing of the entire cast. This is not always true of bel canto revivals. And not just a prima donna—the operas of Pacini’s age require first-rate trios or quartets to prove their mettle.

Maria—Bloody Mary Tudor of history—does not appear until Act II, by which time the plot has woven a web around her throne and her heart. She has a double aria sortita on her entrance, duets with tenor and soprano, a jealous explosion in the concerted climax and another double aria (a sort of mad scene) at the conclusion. Pacini created a role for an ambitious singing actress.

The part was sung by Amy Shoremount-Obra, the winner of a number of prizes, mostly in Wagnerian divisions, and a singer at the Met of that prima donna’s stepping stone, the First Lady in Magic Flute. Her voice is indeed of Wagnerian size and weight, but also of exceptional sweetness, on the order of Mariella Devia or Alessandra Marc.

The top does not soar dizzily high but is beautifully supported throughout her range. She possesses an actual trill, though her ornaments otherwise sometimes fell a bit shy of pitch. She is a large woman and, in a regal part, held the stage regally: her love life mattered, as a diva’s must.

Alisa Jordhem was her foil, Clotilde Talbot. Jordheim, who sings roles like Gilda and Purcell’s Belinda, is one of those tiny singers who look so fragile on stage—and then open their mouths and wallop you off your seat.

Her double aria in Act III was as powerful as you could wish, her ease of expression and ornament rising to beautiful, rather fierce notes above the staff—shouldn’t these be softer in bel canto? The duet of the two ladies, the darker Maria set off by the lighter Clotilde, was a number worthy of encore—and surely got one in 1843.

The duplicitous Fennimore was Kameron Lopreore, whose sensuous, agreeable tenor, ardent and narcissistic, was happily free of the nasality that afflicts many singers who push aloft in such roles. His passage work was steady and his emotions never undercut his phrasing.

While Fennimore looked the elegant and untrustworthy seducer, Leroy Davis, as Clotilde’s trusty Ernesto, seemed too young for the part and not at all decrepit. His voice, too, was youthful, smooth and full of noble character, and he was given too little to do with it. I’d like to hear him as any of the Bellini or Donizetti baritones (Donizetti created many baritone protagonists), and with a little more strength and maturity, he should be valuable in Verdi as well.

James Demler produced a rather dry basso for the scheming Lord Chancellor Churchill, which was not out of place for this devious role. The small chorus hurled themselves into the climaxes as demanded.

Steve Maler’s staging seemed a bit stiff and basic but clear, though he could not always figure out what the characters were to do with the love-token scarf in its hue of red herring. Brooke Stanton’s costumes brought a welcome splash of color to Jeffrey Alan Petersen’s austere set.

If we are going to make the acquaintance of forgotten scores, this is the way to do it: singers who can put over roles written for polished professionals, a conductor who believes in the work at hand, a first rate chorus and orchestra.

There were, as I say, giggles in Act I, when the plot hit such predictable points as the love letter that goes astray, the orphan’s mysterious amulet, the dagger with a coat of arms. (No rings or fans in this one.) But by Act III (the scarf that might save a life, the veil concealing the identity of the doomed prisoner), the giggles were gone. We were enchanted. The music roped us in.