On Site Opera's Turn of the Screw, an immersive production set in the Bronx’s Wave Hill Gardens, featured mostly good singing and a few directorial and technological missteps. 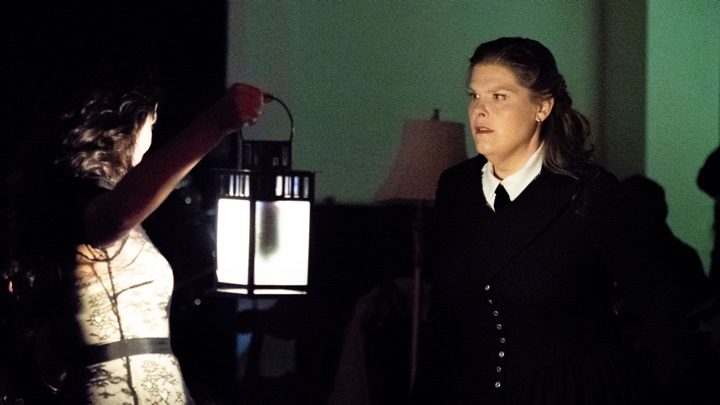 Your intrepid reviewer comes to you, well, not-quite-live from the wilds of the Bronx for On Site Opera’s Turn of the Screw, an immersive production set in the Bronx’s Wave Hill Gardens, which featured mostly good singing and a few directorial and technological missteps.

After catching the 1 train to the end of its northbound line, a shuttle arrived to transport me from the Burger King (only the most regal of fast food will do for me) on 242nd and Broadway into the gardens. I was alone in the shuttle, and felt a bit like the Governess herself in the first scene: excited and also a bit nervous about what awaited at the end of a winding, dark road.

Wave Hill is a large estate, featuring a house built in 1843, extensive grounds, and a greenhouse. This was to be our setting for the evening, and the audience gathered on the lawn, picking up lanterns to light our way. Supertitles and program were only available through On Site Opera’s app, a neat idea, but ultimately a frustrating one for this reviewer, who was taking notes on her phone since the first half hour was performed on a nearly pitch-black lawn, and thus couldn’t easily switch between notebook, program, and supertitles.

The Act One prologue was delivered out on a lawn overlooking the Hudson, introducing Jennifer Check’s empathetic, doomed Governess and Dominic Armstrong’s sinister, seductive Prologue/Peter Quint. These two were the undisputed stars of the evening, their generally exquisite singing overcoming some of the less successful aspect of the production.

The Governess lead us to our next location, an antechamber in Wave Hill House where Mrs. Grose (Margaret Lattimore) and the children, Flora (Ashley Emerson) and Miles (Jordan Rutter) awaited us, each child staring blankly while holding pictures of their dead former caretakers, Peter Quint and Ms. Jessel.

We stayed here only briefly, however, before moving into a large hall with peaked windows and wooden beams like a hunting lodge. The orchestra, conducted by a valiant Geoffrey McDonald, who had to contend with moving locations and instruments three times as well as Britten’s spare orchestration which leaves no room for error, as it would be completely and immediately obvious (there were a few hiccups here and there, but all forgivable) was crammed into a corner. 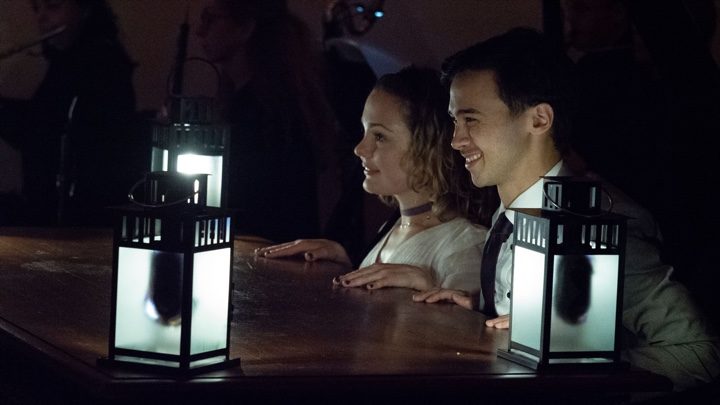 We sat around the center of the hall in a semicircle, and the actors often slithered behind us in addition to working in the center of the “stage” which was strewn with tables, chairs, desks, floor lamps, and toys. Here we would stay for the rest of the production.

Lattimore’s take on Mrs. Grose, the housekeeper who knew something was amiss between Quint, Miss Jessel, and the children, but refused to say or do anything about it, was decidedly shifty, making Mrs. Grose more complicit than clueless or cowed by the children’s absent guardian.

Lattimore has an enormous, darkly-rounded voice, but last night it sounded as if she was losing air as she sang, a problem which compounded as the opera progressed, making her sound slightly out of tune sometimes.

Emerson’s Flora was nicely sung, but she seemed a little wasted in this role, which mostly had her acting needlessly bratty or had her staring, dead-eyed, straight ahead.

Rutter’s Miles was slightly more interesting, though perhaps also more problematic. Throughout, Rutter’s face was twisted into a nasty sneer underneath a skinny, patchy mustache, with a cruel, strident edge to his countertenor to match the look.

He slithered about the stage, sniffing haughtily and looking pretty much completely evil at all times. I admire his commitment to director Eric Einhorn’s idea of the character, and while I found his singing to be occasionally uneven, ultimately, he gave a compelling take on an unsettling, repulsive child character.

Einhorn’s direction made it clear that both children were lost from the very start; they both come off as endlessly sly, creepy, and unpleasant, not the “innocents” the Governess consistently describes them as.

The director also makes the pedophilic subtext into text, with Quint and Miles depicted as clearly having had a sexual relationship, and Miles appearing to be a willing participant, singing the reprise of “Malo” in the second act while writhing on a table, as if having a sex dream about Quint.

This is certainly a legitimate, if extremely disturbing, take on this relationship, but it somewhat emptied the plot of its dramatic stakes, and eliminated some of the ambiguity that makes the opera tick. The children were characterized as evil from the very start, already so corrupted by their pasts that they run happily into the arms of the ghosts, whom they do not fear at all.

It was hard to feel any real suspense of whether or not they would end up possessed, because they had already gone over to Quint and Jessel’s dark side. I also question the efficacy of making Quint so explicitly a pedophile, and particularly, in making it seem like Miles was in on it.

Perhaps this was simply Rutter’s particular physicality interacting with the role, but it totally undermined the distinction between the innocent Miles that the Governess sees and the possessed, depraved Miles under the influence of a ghost, and made Miles strangely unsympathetic (for example, even at the beginning he looks so creepy that it seems totally plausible that he “did an injury” to a friend and got expelled).

Children aside, the central stand-off here was staged between the Governess, Quint, and, to a lesser extent, Miss Jessel.

Here I must expand my compliments again to the two leads. Check has a commanding voice and stage presence, with a bright, gleaming tone that cut like a steel blade, full of power and athletic ability. She brought a sharp edge to her Governess, a controlling streak that wanted the children for herself—and only for herself—that played nicely against Armstrong’s Quint.

Armstrong was an absolute star last night, able to pull from a wide expressive palette in his utterly unflappable, fluid tenor. His dynamic control was impeccable throughout; he knew how to sing in this particular space, using whisper-like pianos to draw the listener in before frightening them with a sudden forte.

He was playful and sinister, a grinning pedophile whose hold over Miles made perfect dramatic sense, even as it was disturbing to watch.Zabala gave a good turn as Quint’s female counterpart, Miss Jessel, her powerful soprano taking on a deep-blue timbre as she went, making her dead former governess strangely sympathetic. Her scenes with Flora were her best, with her kind glances taking on a malevolent undertone.

As for the whole immersive experience, what I’ll say is this: I loved this idea in theory, but I felt that, with the size of the audience last night (around 110 people), it broke up the action a little too much to move us from place to place.

There was much hemming and hawing when we first went into the house as there were not enough seats in the antechamber for everyone to sit. This meant many polite people giving seats up to older folks, but also a long time between the first four scenes, leaving time for people to start chatting, taking pictures on cell phones, etc.

The theater-in-the round style seating made it occasionally very difficult to see what was going on, and there were many times when characters backs were turned, obscuring their diction. If my app had been easier to use (mine crashed in the second act, but others’ were just fine?), this would have been no problem, but I don’t think they’ve worked out all the kinks well enough yet.

It was also strange to be on my phone throughout the opera, and, since the app required internet or data to do the supertitles, I was interrupted pretty regularly by text messages flashing across my screen. This is not exactly On Site Opera’s fault, but I hope as they go along they’ll think of ways to streamline the electronic elements, or maybe project supers in some of the rooms as well as rely on in-app watching.

Despite all these problems, Wave Hill is a gorgeous place to do pretty much anything, and it was a welcome change from sitting in an opera house.

Einhorn’s direction was occasionally a bit confusing (Miles simply walks off stage at the end, instead of dying in the Governess’s arms, it was unclear if the large stage was supposed to be a single room in the house, or multiple rooms based on the scene, many moments taking place on the ground which were impossible to see from where I was sitting), but mostly he used his space well, particularly the balcony from which Quint leered down, at once friendly and ominous.

The blocking was a bit stilted at times—lots of weird, large arm gestures—but there were moments of brilliance, like when Quint softly blows the Governess’s letter over to Miles, tempting him and finally ordering him to “take it.” With that soft puff of air I felt that frisson of thrilling dread that makes Britten’s horror opera so compelling in the first place.