Opéra Royal revives Grétry’s Richard Cœur-de-lion, one of the finest examples of the opéra comique genre. 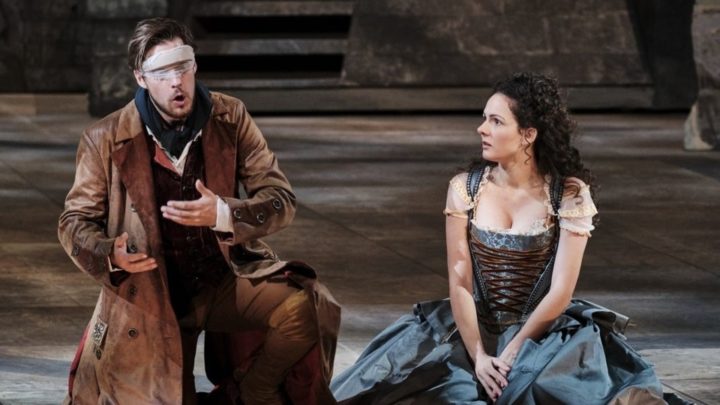 While Paris Opera is celebrating its 350th Anniversary in a grand way, down at Versailles Opéra Royal is also celebrating a season of anniversaries; this year marked the tenth Anniversary since the reopening of the Opera in 2009.

Even more significant is that next year, they are celebrating the 250th anniversary of the inauguration of Opéra Royal, when on 16 May 1770 Jean-Baptiste Lully’s tragédie lyrique Persée was performed in celebration of the marriage of Versailles’ arguably most (in)famous inhabitant, Marie Antoinette, to the French Dauphin (the future Louis XVI.)

Their 2019-20 Season – billed as History of Opera in France, from the origins to Revolution – opened with a rarity, André Ernest Modeste Grétry’s Richard Cœur-de-lion (Richard the Lionheart), one of the finest examples of the opéra comique genre (although it was listed as comédie mise en musique on the score).

Written to a French libretto by dramatist Michel-Jean Sedaine, Richard Cœur-de-lion was premiered in Paris on 21 October 1784 and it was immediately popular, even reaching to the United Kingdom two years later, and Boston in 1797. The version used in these performances came from the streamlined three-acts version first introduced in 1785 in Paris, and here it was performed as 100 minutes without intermission.

Long regarded as Grétry’s masterpiece, it also has the distinction as one of the first rescue operas. Ludwig van Beethoven, who wrote the most famous rescue opera of all Fidelio, clearly were very familiar with this opera, as he wrote 8 Variations on Blondel’s aria “Une fièvre brûlante”, WoO 72.

The opera had an interesting backstory with Versailles, and indirectly became related to a great historic event. While Lully was the most influential composer during Louis XIV, the Liège-born Grétry was Marie Antoinette’s favorite musician.

On October 1, 1789, Blondel’s famous aria “Ô Richard, ô mon roi” was sung by the Royal Guards at a formal dinner on stage at the Opéra Royal, creating a scandal which triggered the fall of the Monarchy, and five days later the anti-monarchist revolutionaries in Paris forced the royal family to leave Versailles for good and Opéra Royal was closed immediately.

Here lies the significance of these performances – a fact that Opéra Royal proudly announced in their website – for this was the first time ever the opera was heard on Versailles walls since that time, and most importantly, this was the first full production of the Royal Opera of Versailles since 1789!

It’s a pity that this opera, and Grétry’s music in general, fell out of fashion as there were tons of enjoyment could be had from his music; it sounded fresh and opulent, the orchestrations full of colors and excitement. Although the subject is an English monarch, the music is unmistakably French. Little wonder that “Ô Richard, ô mon roi” became a popular rallying song amongst royalists during the French Revolution! 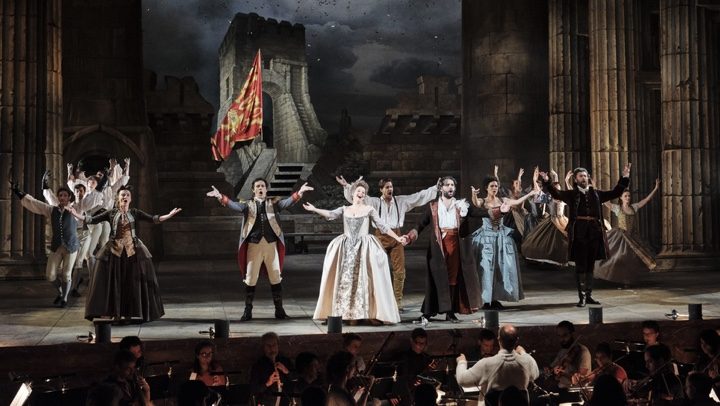 Over the years, luckily there were occasions where other composers and musicians championed Grétry’s oeuvre; besides the Beethoven’s variations mentioned above, Tchaikovsky immortalized Laurette’s aria “Je crains de lui parler la nuit” in his own opera, Pikovaya dama (The Queen of Spades), sung by the Countess in slowed-down version.

The great Mady Mesplé was long a Grétry champion; she recorded the title role of Zémire et Azor with Edgar Doneux in 1973, starred in L’amant jaloux, and in 1977, recorded Richard Cœur-de-lion as Laurette, again with Doneux.

Conductor Hervé Niquet, the founder of Le Concert Spirituel, in an interview likened the opera to a Broadway musical. Personally, the opera (and the production in general) felt more like the precursor to operetta genre to me, particularly those of Gilbert and Sullivan, specifically in term of finding the solution for the opera.

Everybody was paired off nicely with somebody else in a perfect happy ending, and the audience left the theater in high spirits. Besides, the chanson “Et zig, et zoc, et fric, et froc” in Act 3 came directly from Gilbert’s dictionary (or was it the other way around?)

Though Camille Assaf’s costumes resembled the times of the work rather than Richard the Lionheart’s own times, the staging was definitely traditional through and through. Opéra Royal doesn’t have a large stage, and most productions that I had seen here seemed to use a somewhat static one with the help some figurative backdrops.

Antoine Fontaine, the resident design guru of CMBV, created a period set that was truly jaw-dropping, with very imaginative backdrops that shiftily moved from the image to the castle, the gothic prison, and Sir Williams’ party room. He even made a prominent use of a passarelle – similar to the one used in Broadway musical Hello, Dolly! – to bring the action even closer to the audience.

Pynkoski directed the traffic extremely well, no superfluous movements whatsoever on the stage. He made use of the boxes next to the stage to sit the chorus and the dancers when they were not singing. The Opéra Royal Ballet, as choreographed by Zingg, organically merged with the actions on the stage, at no times they felt being extras. Hervé Gary’s lighting efficiently illuminated the stage, never lost track of each individual singer amidst the chaos.

The true architect for the night was Niquet, who masterly led the whole proceeding in vigorous, exciting manner, without feeling rushed. In his hands, there was a definitely drive to move the score while still finding the time to highlight his magnificent orchestra, Le Concert Spirituel.

The timpani sounded thunderous, the trumpets fully declamatory, and the strings fleetingly sonorous. From the first notes of the Mozartian ouverture (no wonder Grétry was called the French Mozart!), you got a sense that you were in a very capable hands indeed, as it was confident and grand.

Maybe because of the passarelle, the division of the orchestra was truly interesting to me; as Niquet sat in the center, with the violins lined up behind him! Despite the rather funky sitting arrangement, there was no loss of audibility from any sections of the orchestra at all!

It helped a lot that Niquet was supported by a great cast, both as singers and as actors during the spoken parts. Despite the opera’s title, the true hero of the opera was the troubadour Blondel, here sang by tenor Rémy Mathieu.

Tall, handsome, and yes, young (in spite of the libretto’s requirement for old blind man), Mathieu evoked with his bright tenor a strong and heroic persona, easily believable as a squire devoted to his king. He didn’t even disguise himself as an old man, he just put on a blindfold around his eyes!

Melody Louledjian acquitted herself well as Laurette; there was a sense of naivety in her crystalline voice. Her “Je crains de lui parler la nuit” felt heartfelt and pure, almost like love at first sight!

Marie Perbost, whom I saw earlier this year as the authoritative councilwoman Tulia in Baldassare Galuppi’s Il mondo alla roversa, lent her clear tone to not just one role, but two; the trouser-role Antonio who guided Blondel around, and Countess Marguerite. She made both roles distinctively different as she darkened her voice to portray a young boy, and she showed off her coloratura skills in the small role as the Countess.

The Belgian tenor Reinoud Van Mechelen, who frequently sang with most Baroque ensembles in Europe, assumed the role of Richard. His rather dark tenor voice contrasted well with that of Mathieu, and he imbued his performance with dignity and nobility. His opening aria “Si l’univers entier m’oublie” sounded truly heartbreaking in this way. All other comprimario roles were handled handsomely, made it a truly winning cast.

As I watched the performance, I felt like I was watching a little piece of history unfolded before my eyes. I was so glad to find out that the third performance was recorded, and it was planned to be released on Château de Versailles Spectacles label.