I find it difficult to experience Madama Butterfly without also experiencing an odd fracturing of the self. 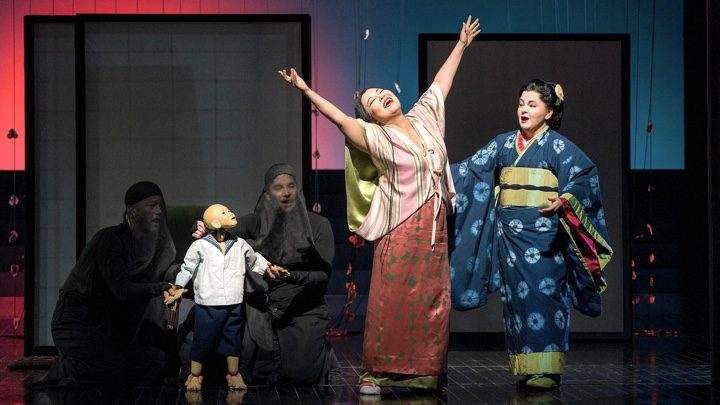 I find it difficult to experience Madama Butterfly without also experiencing an odd fracturing of the self. As an Asian American, I have always thought of Butterfly as belonging to a pantheon of Orientalist aggressions (nestled, perhaps, between Mickey Rooney and Miss Saigon), as an opera lover I have experienced its canonicity as unassailable, and its music as undeniably masterful.

This fissure between alienation and romanticization is precisely the gulf over which the Met’s current revival of Anthony Minghella’s oft-revived Butterfly seems to want to balance, but, unwilling to divest from a leadening theatrical realism, it never quite makes it to either shore.

I do not believe this fracture is merely a contemporary audience member’s response — the opera itself is a house divided between its unflinchingly awful portrayal of Pinkerton’s colonial entitlement towards his 15-year-old bride and the unwavering beauty and romance with which their encounters are set to music. The Met’s Butterfly seems at first prepared to tackle the need for a kind of critical distance from the opera’s more offensive material.

Many of the production’s most striking elements are anti-realist stylizations: the tilted mirror above the stage that forces a bird’s eye perspective for those seated in the orchestra seats, the vertiginously raked stage that creates the same effect for the Mezzanine, the Bunraku puppetry that eerily animates Butterfly’s young son.

These steps away from theatrical realism lead the audience towards the limits of Puccini’s extremely persuasive score, alienating them from the magic by which immersion in his music makes the opera’s racism and sexism almost palatable.

It is a pity, therefore, that the only singer who seems willing to bring a style of gesture other than entirely straight-forward theatrically realist acting is Hui He in the title role. He’s voice was a bit of a disappointment; she never lacked for volume, but seemed a little belaboured, pouring audible, breathy exertion into high notes that always hung a little under pitch. Her voice has plenty of power, but very little sweetness, and there is a consistent unfocused imprecision to the tone. 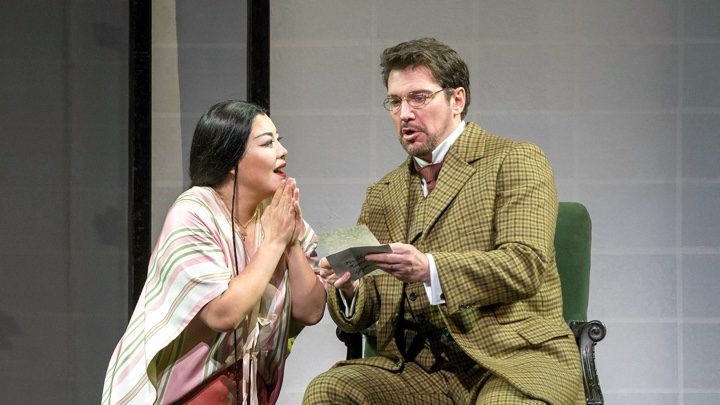 Her acting, in contrast, is all precision—every gesture, every movement is as smooth, deliberate, and oversized as a silent film star’s. In fact, her movements are uncannily similar to those of the Bunraku puppets with which she often shares a stage.

The mannered unreality of He’s vocabulary of gesture, like the puppets’, creates a distancing effect: He is a Butterfly whom the audience at once understands to be an abused child and a performing adult, a tragic heroine and an orientalist trope.

The effect is lessened, however, by its singularity — the rest of the cast brought naught but the same stiffly realist acting style inescapable at the Met. This is not to say the other performances were disappointing. Piero Pretti was a fine if not particularly exciting Pinkerton, with a clear bright sound, although hardly a surfeit of stage presence.

Vocally, the supporting players stole the show: Paulo Szot’s Sharpless was swoon-worthy both for his powerful baritone and for his moving portrayal of moral conflict, and Elizabeth DeShong brought to Suzuki a blazing mezzo-soprano and a spitfire energy that had the whole house sitting up a little straighter whenever she came on stage.

Nevertheless, the gap between He’s acting style, which seemed to this reviewer to align more closely with the production as a whole, and those of the other players meant a general lack of unity, which made for moments where a stage full of singers felt oddly stratified.

This general lack of chemistry might have something to do with Pier Giorgio Morandi’s conducting, which was inoffensive to the point of un-excitement, but the larger issue was certainly the mismatch between the theatrical mise-en-scene’s population of puppeteers and dancers and the night’s singers, who largely acted as though they had walked directly off the set of Zefirelli’s Bohème, pausing only to swap poet’s shirts for robes. 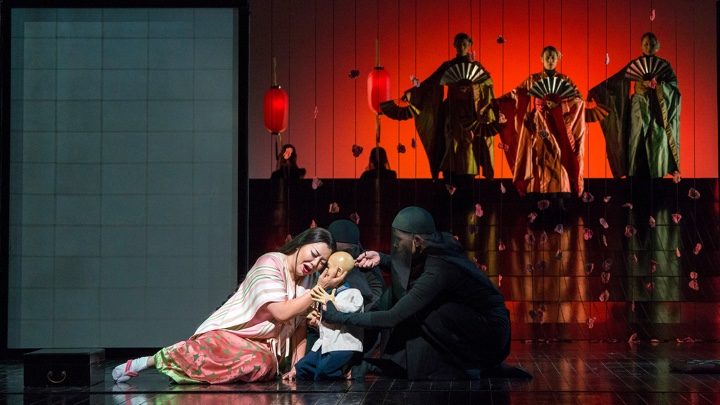 More than under-committed, in moments like the end of Act 1 duet between Butterfly and Pinkerton, the production seems to swap sides, joining the romanticism of the score in trying to make the bitter pill of Pinkerton’s abuse sweeter to swallow.

The duet’s staging, which includes dancers holding paper lanterns and a downpour of drifting flower petals, is no more realist than the giant mirror overhead, but where the mirror and the strikingly artificial tableaux created in its reflection are stylizations that invite critical thought, the arch of glowing lanterns that crowns Butterfly and Pinkerton are stylizations that create a dreamy, glamorizing effect.

To treat these gestures as the same thing, or as doing the same kind of work upon the audience, is a discredit to the audience, and to the show itself; to pick and choose when we are invited to think critically about a work that is itself both materially harmful and bizarrely self-aware is at best a waste of that ambiguity and at worse a condoning of Butterfly’s worst self.

Worse still is my suspicion that what united these theatrical devices for the productions’ designers was not in fact their anti-realism but their Japanese-iness — that it was assumed that Bunraku puppets and drifts of cherry blossoms must ultimately create the same theatrical effect because, after all, they would both show up on the same list of “top ten things the average white American associates with Japan”.

I want to believe that the Met’s Butterfly has something critical to say about this opera that so explicitly hates me. I do believe, perhaps naively, that this opera could be made to say something that does not condone or replicate that hate. But, muddled by a lack of consistency of concept or clarity of execution, this Butterfly offered me only the briefest flutters of something more.