“Trove Thursday” presents for the third annual installment of “Handel for my Birthday” a wickedly ideal Felicity Palmer dominating Agrippina. 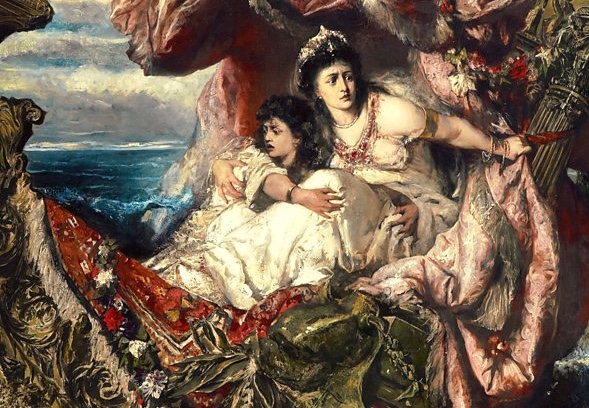 The delicious opera about political and sexual hijinks in ancient Rome is everywhere these days, including premiering in February at the Met.

Today’s 1982 Kent Opera Agrippina (using period instruments) is performed in an aptly tart English translation that adds immeasurably to the enjoyment of one of Handel’s earliest and greatest works.

Although until recently many may not have been familiar with the intrigues that propel Cardinal Vincenzo Grimani’s biting libretto but anyone who caught the brilliant BBC series I, Claudius will have a good idea of what Agrippina and its (sort-of) sequel Monteverdi’s L’Incoronazione di Poppea are all about.

In recent decades most will be most familiar with Dame Felicity from her late-career excellence in character mezzo roles like Klytamnestra in Elektra and the Countess in Pikovaya Dama which she sang just last season at the Royal Opera. I first heard her at her belated Met debut at age 56 as Götterdämmerung’s Waltraute in 2000, but before she turned to this dramatically demanding repertoire Palmer was best known as a soprano who performed lots of 17th and 18th century music.

In 1975, Palmer starred in the title role of Alceste in one of the first recordings of a complete Lully opera and “Trove Thursday” previously featured her in a broadcast from two years earlier of another French baroque work, Boismortier’s Don Quichote chez la Duchesse.

My earliest acquaintance with her came on a reel-to-reel tape I bought in college of Rameau’s obscure Les Fêtes de Polymnie, and she’s featured in one of the entrées offered last month on “Trove Thursday” of that composer’s Les Indes Galantes.

One of her finest recordings is Gluck’s Armide as the lovesick sorceress who loves and loses Anthony Rolfe Johnson’s Renaud.

It’s no surprise that she was also a distinguished Handelian who participated in a number of excellent recordings under Nikolaus Harnoncourt: Belshazzar, Alexander’s Feast, and the Ode for St. Cecilia’s Day again with Rolfe Johnson

Besides today’s brilliant Agrippina, she was a notoriously controversial Orlando with Les Arts Florissants at Aix-en-Provence for the premiere of the Robert Carsen production and also performed Juno and Ino in Semele, Storgé in Jephtha, Cornelia in Giulio Cesare (at the San Francisco Opera in 2002 for example) and Eduige in Rodelinda at the Bavarian State Opera as recently as 2006.

Two other notable stalwarts of the British early-music scene of the 1970s and 1980s appear in today’s Agrippina as well. One of my favorite countertenors, Paul Esswood is ideally cast as the much put-upon Ottone, the opera’s only truly good character. And bass David Thomas, a fixture with Emma Kirkby of so many Christopher Hogwood CDs, bloviates delightfully as Claudio, the clueless emperor ceaselessly manipulated by his wife and by Poppea, the “other” woman he unsuccessfully pursues.

Joyce DiDonato, who takes on Agrippina at the Met, has recently participated in both a concert tour of the opera as well as appeared in Barrie Kosky’s production which just closed at the Royal Opera, Covent Garden. A new recording of Handel’s first masterpiece on Erato starring DiDonato with countertenor wunderkind Jakub Josef Orlinski as Ottone will likely be released before the Met premiere.

Those curious about Sir David McVicar’s vision which originated in Brussels nearly 20 years ago (?!) should check out Joel Rozen’s examination of it in the newly published Met 2019-20 Season Book.

Kosky’s take premiered in July in Munich with the beturbaned/ bepajamaed Alice Coote, while Mariame Clément’s acclaimed Dallas (the primetime soap)–influenced reimagining plays in Seville with Ann Hallenberg’s stunning empress as its centerpiece.

The Swedish mezzo, who also just sang the opera in Bucharest reviewed here by Michael Anthonio, will again do Agrippina at next summer’s Drottningholm Festival.

Agrippina can be downloaded by clicking on the icon of a square with an arrow pointing downward on the audio player above and the resulting mp3 file will appear in your download directory.

The previous two installments of “Handel for my Birthday” (or whatever it was called) are still available. In addition, nearly 300 other podcast tracks are always available from iTunes for free, or via any RSS reader.

An archive which lists all “Trove Thursday” offerings in alphabetical order by composer has been recently updated.