It’s an old chestnut of a joke that applies even more to opera than to the theatre: A veteran actor is on his deathbed. 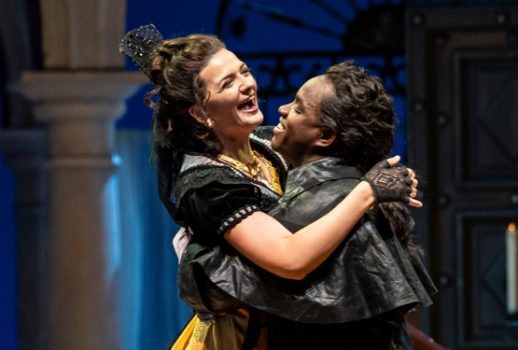 His friend says “This must be hard for you.” The actor replies, “Oh no, dying is easy. Comedy is hard.”

Lyric Opera of Chicago last night opened its 65th season with a stellar production of Rossini’s warhorse comic opera The Barber of Seville (Il Barbiere di Siviglia) that made the comedy look easy. A stellar cast of remarkable singing farceurs, inventive choreography and direction by Rob Ashford and revival director Tara Faircloth (in her Lyric debut), and Rossini’s sparkling score played with verve and style by the Lyric Opera Orchestra under music director Sir Andrew Davis, combined for an evening of musical pleasures and bumptious good humor.

I am usually not the biggest fan of comic opera. Too often these productions devolve into cutesiness and commenting on the characters rather than embodying them. And, let’s face it, most of Rossini’s comic efforts are not completely successful in stretching the good humor over three hours of frequently repetitive music.

It is a tribute to Ashford and Faircloth’s direction that last night’s show found that fine line between exaggeration and subtlety that made all the comic elements tied to character development instead of being imposed as “bits.” As a result, the entire cast was clearly buying in to the style of play that the director was asking. Everyone was “on the same page.” This sense of shared style and purpose is rare to see in theatre or opera, and it allowed the cast to focus on the humanity of the characters rather than buffo antics.

And yes, the plot is sheer silliness involving disguises, guys eavesdropping by hiding behind plants, love at first sight, maiden in distress under the thumb of her grumpy guardian. The Lyric audience responded with plenty of laughs and a couple of well-earned sighs. 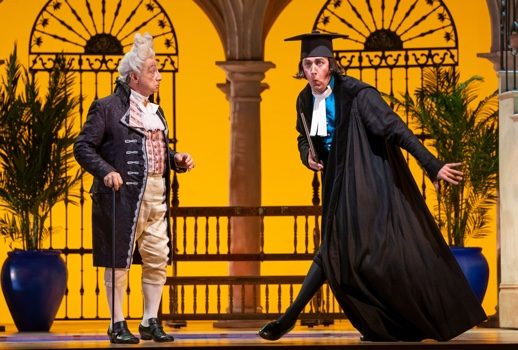 Anchoring the cast is an absolutely bravura performance from tenor Lawrence Brownlee, singing with unrivaled sweetness and astonishing flexibility, executing Rossini’s complex and intricate runs with flair and ease. Brownlee’s excellent comic timing and the delicate vulnerability in his acting made him an audience favorite, as he was as Arturo in Lyric’s I Puritani in 2017-18 and Don Ramiro in La Cenerentola in 2015-16. His bel canto work just keeps getting better.

Bass-baritone Adam Plachetka made a delightful Figaro, oozing charm and vocal generosity. His fast-paced “Largo al factotum” was a model of flexibility and power, and his character was filled with infectious good humor. He was outstanding in his mastery of physical comedy, and his presence was commanding and riveting throughout.

Also quite wonderful was the great buffo baritone Alessandro Corbelli as the blustering Dr. Bartolo, masterful in his comic timing and facial reactions, probably garnering the most laughs of the evening. Polish bass Krzystof Baczyk made a fine Lyric debut as Don Basilio, alternately playing arrogance and greed. His sly take on the aria “La calunnia e un venticello” was just right, his lowest notes potent and powerful.

Another Lyric debut was the surprise highlight of the evening. Soprano Mathila Edge, a first year Ryan Opera Center member, made the small role of Berta (Rosina’s governess) a gem. I first noticed the huge size of her soprano standing out in the long ensemble that ends the first act. Then, she delighted in her second-act aria “Il vecchiotto cerca moglie”, a comic and touching rumination on the nature of love and its frustrations and joys. This is a very powerful, clarion voice and Ms. Edge is certainly a young singer to watch.

I am of two minds about French mezzo-soprano Marianne Crebessa’s Rosina. While she sang and acted with grace and aplomb, there’s something about the weight of her voice that seemed too heavy for Rosina. While she sings the mostly lyric mezzo repertoire, hers is a particularly dark and chocolaty voice, and lacked sparkle in the upper reaches of the role. 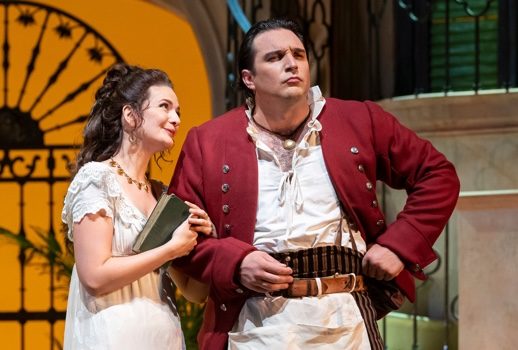 In the famous aria “Una voce poco fa”, she was deliciously flirty and determined in her desires, but in what is for me a real telling moment, when she switches gears with the word “Ma” (“But”), Ms. Crebassa pounds the note with a hammer rather than caressing it.

It should be said that the audience liked her work very much, and it may be that I simply prefer a lighter timbre for Rosina. She has to be complimented for her charm and vocal flexibility, and she had wonderful chemistry with Mr. Brownlee.

There was the usual fine work from the Lyric Opera Orchestra and Chorus. I thought Sir Andrew Davis’ tempi in the well-known overture were a bit slow, but once the singing began, the spark was there and the singers were very well supported. I must admit that my attention wandered a bit during the long, long ensembles that end Act One, but even the most dedicated Rossinian would probably admit that the piece has its longueurs. But this bubbly production almost entirely maintained the charm and pace.

That bubbly and sparkling tone will take an abrupt turn in a couple of weeks when Verdi’s dark melodrama Luisa Miller opens. I can’t wait.