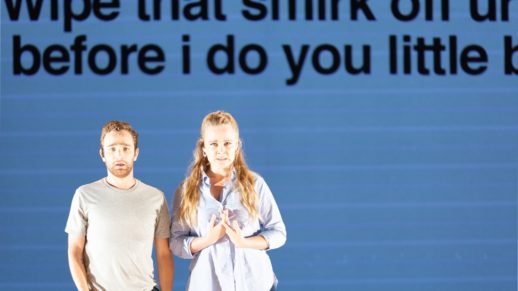 In the three years that Festival O has been a musical fixture in Philadelphia, its greatest impact has often come through its smallest works.

Take Denis & Katya, a superb new two-hander chamber opera by composer Philip Venables and librettist Ted Huffman. What a stark contrast from last night’s gala opening! The enormous, razzle-dazzle The Love for Three Oranges at the Academy of Music was a lot of fun, for sure. But this afternoon, half a block away, and employing the most slimly elegant resources, Denis & Katya was a monumental, dramatically shattering event.

The subject here is, sadly, a true event. It happened in the Pskov region of Russia in 2016, though there are eerily similar incidents occurring everywhere and all the time. Two teenagers established a web presence which portrayed them as unpredictable, anarchic and potentially violent.

Of course, their fan base—who watched through a platform called Periscope—quickly grew. The story did indeed end violently: police raided the place where Denis and Katya, and both died at the scene. Beyond this, much remains cloaked in ambiguity—including, most significantly, the question of how real their implied threats actually were.

The opera, too, lives in haunting ambiguity, its language—both musical and textual—simultaneously stark and murky. Venables employs four cellos, placed in the corners of a bare stage, as the only musical accompaniment, although electronic and industrial noises are also mixed into the soundscape. (The excellent cellists here are Rose Bart, Jean Kim, Jennie Lorenzo and Brandon Yeast; the music director is Emily Senturia.) 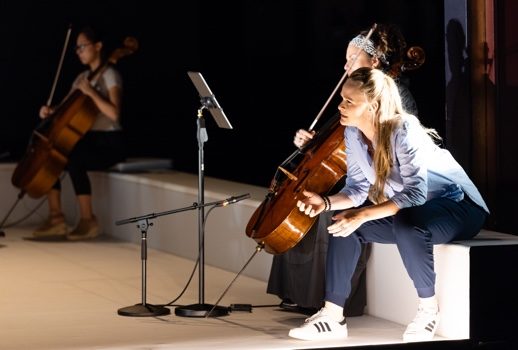 The warm string texture, at once mournful and agitated, is an ideal platform for a series of fragmented speeches offered by various observers (tellingly, not by Denis and Katya themselves), played by mezzo-soprano Siena Licht Miller and baritone Theo Hoffman.

That thorny narrative takes many forms here—sometimes spoken, sometimes printed on a backdrop screen that otherwise remains mostly black or white, and often sung. Venables’ vocal writing would likely not be excerpted outside this context, but it is dramatically vivid and vocally graceful, as well as superbly delivered by Miller and Hoffman. If anyone thinks that singers of modern music don’t usually have gorgeous voices, these two will change your mind in a hurry.

Part of the brilliance of Denis & Katya is the way its storytelling naturally mimics the process by which internet surfers come to learn the news—obliquely, in dribs and drabs, with facts mixed alongside (and sometimes indistinguishable from) conjecture. Huffman also staged this production, by the way, and it’s as good a piece of direction as I’ve seen in years.

In addition to their beautiful voices, Miller and Hoffman display something perhaps even rarer: a sense of complete ease and comfort onstage, while at the same time bringing laser-like focus to the drama. 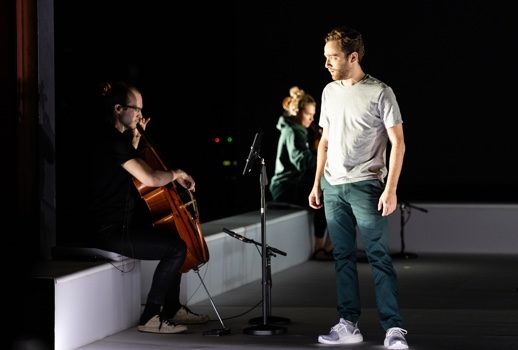 For my taste, the stunning climax of Denis & Katya occurs around ten minutes before the end. I don’t want to spoil it, but for the first time we see a concrete visual image… and the sonic accompaniment fades into silence.

The dramatic final scene that follows is certainly effective and beautiful, as the cellos take on an almost Dowland-like sense of sparseness and sorrow. But it also exerts on the story a touch of moralizing and sentimental closure. Till then, it’s the elliptical nature of Denis & Katya that I found most profound. Frankly, if I were Venables and Huffman (and co-creator Ksenia Ravvina, who also should be mentioned), I’d end the piece here.

But it’s a small point. What I really want to leave you with is the sense that this is an important, out-of-the-box work, superbly performed. Denis & Katya deserves to have a long afterlife, and with luck, it will. But if you can see one of the remaining performances here at Festival O19, you absolutely should. It is utterly spellbinding.